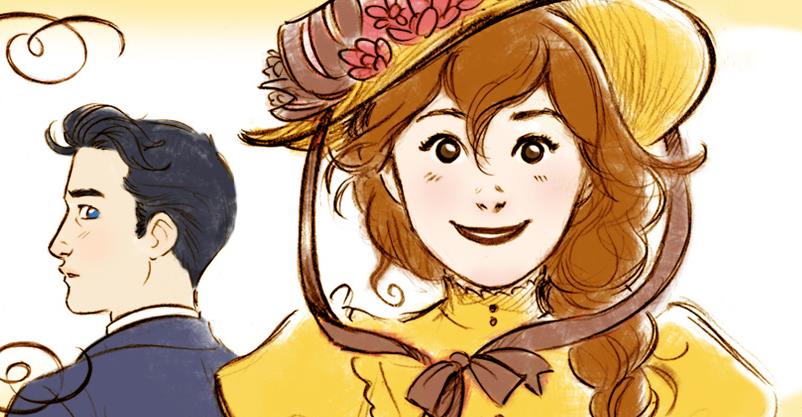 Webcomics come in all shapes and sizes. From stick-figure satire XKCD to international favorite SCANDINAVIA AND THE WORLD, there are any number of different webcomics to suit all tastes. But MISS ABBOTT AND THE DOCTOR, created by Maripaz Villar, is something you may not think of — a “Victorian rom-com.”

MISS ABBOTT AND THE DOCTOR tells the story of Cati Abbott and Doctor Andreas Marino as they fall in love. Their relationship begins with them being barely civil adversaries. Cati’s upbringing took place in the Amazon amongst anthropologists and indigenous cultures. She stands out in their small town as someone different — the opposite of Andreas, who is proper and upright. As the series progresses, however, we see that Andreas is not as humorless as he may seem and the former adversaries embark on a swoon-worthy romance.

In each weekly “episode,” Cati and Andreas embark on various adventures. In one, Cati rescues Andreas when he falls into a series of caves beneath the town. Other less thrilling adventures see the two navigating a town dance, nursing Andreas’ sick nephew, and dealing with unexpected “tachycardia” (hint: it’s not tachycardia).

MISS ABBOTT AND THE DOCTOR may not sound like your typical webcomic, but trust me, it’s worth a look (or five). The storylines are compelling, the characters endearing, and the adventures amusing. More than that, MISS ABBOTT AND THE DOCTOR tackles socially compelling issues like homosexuality and gender equality. Certainly not something you would expect in a Victorian setting.

READ: HYPERBOLE AND A HALF is a webcomic that’s not afraid to tackle difficult issues — like mental illness! Read more here!

I was able to speak with Maripaz about her comic and what she feels is so important about MISS ABBOTT AND THE DOCTOR; namely, the way that the comic allows her to comment on social issues still prominent today. This interview has been lightly edited for grammar and spelling.

ComicsVerse (CV): Where did you get the idea for MISS ABBOTT AND THE DOCTOR?

Maripaz Villar (MV): There was this contest at my old job (I worked in a small animation studio) to find a project for an animated TV series. I wanted to make something related to the stories I loved when I was a teenager: NORTHERN EXPOSURE, ANNE OF GREEN GABLES, MOONLIGHTING… so I came up with the story of an extravagant girl arriving in a small, quiet town and meeting a grumpy doctor. Long story short, I didn’t win, but that didn’t stop me from writing and drawing about these characters for the next [few] years.

CV: What is your process for making each episode?

MV: I write a basic synopsis and some ideas about what I want to tell and, when I can see the first scenes in my head, I start drawing and writing a first version of the dialogues on paper. Once the draft is done I “ink” it with a graphite pencil and scan all the paper sheets. Then I translate to English [Maripaz, who is from Spain, writes each comic in Spanish first] and type the dialogues, send them to my proofreader and finish the panels in Photoshop. It takes too long and I don’t recommend this method to anyone, by the way [laughs].

MV: I don’t think I get inspiration from any specific artist or style, but I guess my style is a mixture of what I enjoy reading (some kinds of manga and anything Alan Davis have ever done, for example) and the styles I had to adopt when I worked in animation. I don’t know if my style suits a Victorian setting, but I think it suits the playful tone of the story.

MORE: Check out CV’s interview with Chuckdrawsthings, where we talk about webcomics and mental illness!

CV: Your story is fairly progressive for a Victorian setting. Is it important for you to push boundaries of what people might expect from what you describe as a “Victorian rom-com“?

MV: Yes, it’s very important for me. I like playing with the classic tropes and changing them; it would be boring otherwise.

CV: You mentioned in an author’s note that you lost some readers after revealing that Rebeca is gay. How does that feel for you, as a writer?

MV: As a writer, I didn’t mind at all (there were four, maybe five, people complaining). As a person, I was upset because I couldn’t believe what some people said (that homosexuality is some kind of modern sickness, for example). Fortunately, almost everybody stayed and celebrated it, which was really great.

CV: Do you think that Cati’s unique background allows for more opportunities to discuss progressive ideals?

MV: Yes, she doesn’t see things like everybody else and allows the other characters to question themselves.

READ MORE: Cati could be defined as a “Strong Female Protagonist” — read our take on the development of the trope!

CV: Some of the issues MISS ABBOTT AND THE DOCTOR bring up are contentious today — for example, Cati and Andreas’s discussion about women’s clothing in Mr. Barone’s shop. Do you hope that your readers will learn from what you (or Cati) have to say?

MV: Well, I think it’s interesting to talk about certain issues if the story allows it. I’m not trying to teach anything: things come naturally. In that particular case I was writing the scene and thought it would be funny to see the doctor in a dress because he’s supposed to be stiff and has to maintain a reputation, but suddenly I realized it was an old joke based on a sexist point of view. And I made Cati realize it too.

Not everybody understood it, but what I wanted to show is that a man in a dress is no less of a man, the same way a woman in pants is no less of a woman. The reason we laugh is because everything related to women is considered less important, ridiculous even, and liking something targeted at women is a shame for a man. Movies, TV series, comics, and books made for and by women are seen as second-class products because women are considered second-class humans. That’s what the doctor understood and why he agreed to wear the dress.

CV: Would you consider Cati to be a role model?

MV: No, she’s nuts! [laughs] But I think she has some good qualities, like being true to herself.

CV: What do you hope readers take away from MISS ABBOTT AND THE DOCTOR?

MV: I’d like them to think that they don’t have to be or to do anything they don’t want to. We all have responsibilities and sometimes we can’t escape from our circumstances, but life is short and we mustn’t settle nor accept what hurts us. This applies to love, jobs, and life in general.

CV: How much of the story do you already have planned out? Having just started Season 2, do you have an idea of how long you plan to continue the story or are you planning to just keep writing until you run out of ideas/enjoyment?

MV: I’d love to draw this story forever and have several chapters in mind, but I want to end it with a good finale and not make meaningless chapters for the sake of making chapters. We’ll see.

CV: Will Rebeca ever get her magician butcher girlfriend?

Final Thoughts on MISS ABBOTT AND THE DOCTOR

CV: Do you have a favorite character?

MV: Cati is my favourite, but I love Andreas and the contrast between the image he has of himself and how he actually behaves.

CV: What would you say to someone considering reading MISS ABBOTT AND THE DOCTOR?

MV: The first chapters are basically one-shots and they might be confusing because you don’t know who these characters are, but we learn about them and their pasts while the story progresses and the chapters become longer and deeper. Also… ignore the typos and grammatical mistakes, please!!!

CLICK: Artist Shitty Watercolour is an inspiration! Check out our interview here!

CV: Do you have any advice for aspiring webcomic creators?

MV: Have fun or do anything else. Take your time, draw for you, and do it because you are enjoying the process, not because you think you have to do it.

Check out MISS ABBOTT AND THE DOCTOR at Line Webtoons, and support Maripaz Villar via her Patreon!