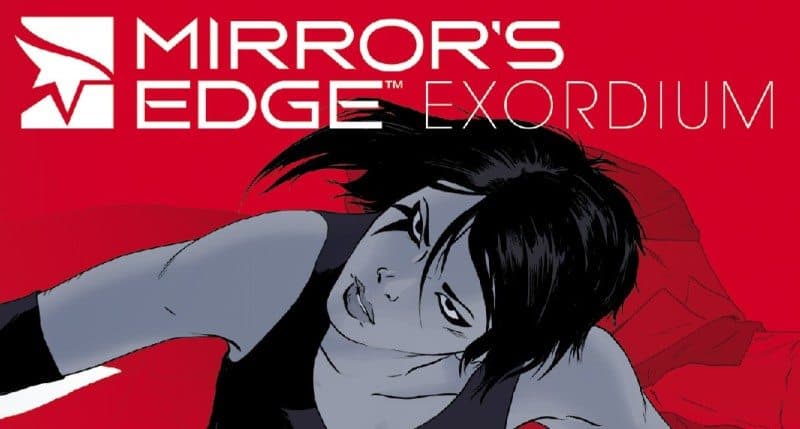 MIRROR’S EDGE was first-person free-running video game released by EA and DICE in 2008. While only a cult hit at the time, the game revolutionized the first-person gaming genre by taking the focus away from shooting and putting players in the shoes of a female protagonist. Now a new game in EA’s burgeoning franchise–MIRROR’S EDGE: CATALYST–is set to release in 2016. What better way to celebrate than with a tie-in comic book, right?

As it turns out, this was a good move!

Published by Dark Horse Comics, MIRROR’S EDGE: EXORDIUM is a prequel to the 2016 video game, itself a “re-imagining” of the 2009 title. Where the original game lacked for plot and character development, EA is pushing to revitalize the world of the Runners by adding new depth to its central characters. At its core this initiative is all about making Faith Connors–lead protagonist of the series–better, faster, stronger, more kick-ass. But before Faith’s fans get to take her for a run in 2016 EXORDIUM is here to tell us a little more about how the free-runner extraordinaire got to where she is.

Those experienced with the game will find Dark Horse’s prequel comic equal parts familiar and fresh. The high-speed chases, races, and rooftop antics are all there, but EXORDIUM also delves a little deeper into Faith’s world by including a host of supporting Runners, whereas the game only features a handful.

Faith is depicted here as a rookie still earning her way up the ladder, not yet the best-of-the-best Runner fans have come to know her as. Acting as bait on a data-grab mission she wasn’t authorized to participate in, she leads security guards on a chase that inadvertently leads all involved right into a secretive meeting criminal organizations on the rooftops. Captured and taken to a crime boss known as Dogen, Faith receives a job offer and picks up some information on her long-dead parents. (Fans will appreciate references to the November Riots here.)

Readers who have played the game will also notice Faith lacks her trademark arm tattoo. While speaking with Dogen she actually finds some manner of framed work that appears to be of the same design as the tattoo. Dogen claims it was created by Faith’s mother so naturally she attempts to steal it. She fails to escape with the object, however, and flees empty-handed.

Faiths gets a scolding from her superior and later bumps into a rival group of Runners lead by a familiar face: Cel, partner and resident traitor in the original game. We’re treated to a scene of the two ladies testing their speed against one another in a race, because that’s what Runners do when they aren’t fighting the good fight against corrupt politicians, dirty cops, and the widespread plague of greed and wilful servitude overtaking the City of Glass: they race each other like high school kids. It’s a cool scene, however, and hits several visual beats that should have gamers feeling nostalgic for the old game and ready for the new one.

The same could be said of this issue as a whole. It does a great job bringing a gaming franchise to comic book form, making fans like myself excited for the upcoming game by providing a nice slice of previously unseen character development and world-building. EXORDIUM also functions well as a stand-alone reading experience, something very few promotional tie-ins can do, so mad props to EA and Dark Horse for getting this right.

Being the first of a six-issue series, MIRROR’S EDGE: EXORDIUM #1 is just the start to an all-new chapter in what is shaping up to be an exciting franchise resurgence. I find myself excited to return to the City of Glass next month and learn more Faith and her companions–and also her rivals–and strongly encourage both video game and comic book fans alike to do so as well. Even if it does have EA’s name stamped on it.