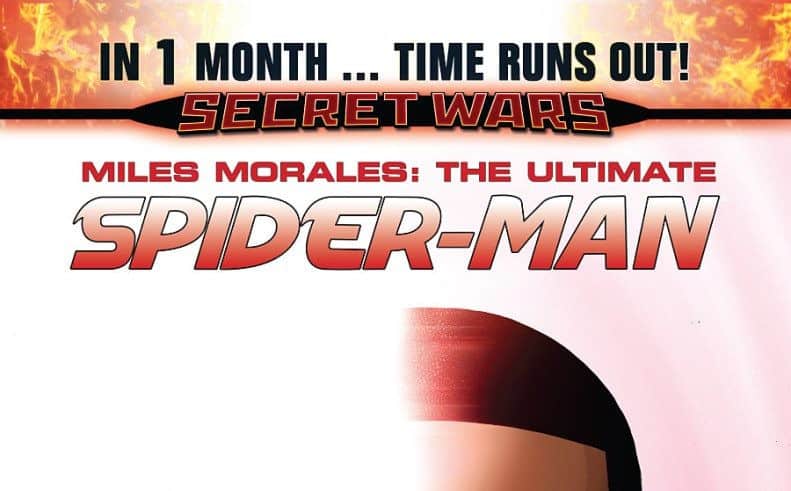 Miles Morales: The Ultimate Spider-Man Review- The End is Doom

Miles is going through one of the toughest times of his life! Hours after his father returns, he is kidnapped by Hydra, along with Miles’ best friend Ganke. His girlfriend and her parents turned out to be part of Hydra and have lured him into being captured. Can things get any worst?! Yes they can… in enters DOOM!

Bendis and Marquez have reached the end of their journey with Miles Morales. You can see through the characters’ dialogue that Bendis wanted to get straight to the point with the end of this arc. The character dialogues were short and sweet, and they delivered answers to most of  the unanswered questions of this series. The characters’ motivations were clear, especially Dr. Doom’s interest in Miles. Doom was not the only one to make an appearance; Bendis was able to get all of Miles’ immediate supporting cast to be part of the end. Everyone had a part to play, which I appreciated because it shows how intricate the story development was and that no characters were phoned in. Despite the series ending, Bendis open up new developments that I enjoyed, one being Miles’ other roommate Judge. I instantly fell in love with this character as he appeared more often, which left me wanting more of him. He had one of many humorous lines, such as this one about his opinion on Staten Islanders: “all they are is unusual”.

Marquez and Ponsor have given us their best during this series and this issue is no different. Marquez keeps the panels simple but fluid. Not only are the panels fluid, but so is his depiction of Miles’ movements. He has shown how much he has grown as an artist in his mastery of the spider-like movement, which conveys how much Miles has come into his own. Marquez gives us a beautiful send-off with a panel of Bendis’ and Marquez’s cop alter-egos in a warm handshake symbolizing the end of this partnership. He also adds humor to the scene by drawing a deranged Captain-Universe-dressed Jonathan Hickman admitting that it’s his fault (alluding to the series ending due to Secret Wars) while being arrested. It had me laughing for a while and could be one of my favorite comic moments this year. Ponsor’s colors felt even brighter during the dark-lit scenes, and he captures the lighting well when coloring Dagger. You can feel the intensity of the colors with each blast being shot. Marquez and Ponsor show us why they are a powerful team.

There were a few things that rubbed me the wrong way in this issue, but they mostly involved Dr. Doom. There is an understanding as to why he has appeared, which involves events that happen during Bendis’ other series, All-New X-Men. I am aware of some of it, due to staying informed about X-Men, but it is something that did not occur in Miles’ own book. The editor did miss the opportunity to place an editor note telling readers that Dr. Doom is referring to All-New X-Men #31-36, which is something readers who aren’t reading All-New X-men might need to know. There is also the showdown between Dr.Doom and Miles that was overlooked. We as readers don’t get to see the showdown, just the victory. It would have been an amazing fight if we got more of it, but this book comes with only 22 pages, so sacrifices needed to be made. There was one question that was not answer completely: Who are the Spider-Twins? We might never know, at least not in this book.

The end has come for Miles Morales and the Ultimate Universe. As the series comes to it’s finale, Bendis and Marquez continue to show us how great this series and the characters are. Miles never ceases to amaze me, no matter what challenges come his way. Give this last issue a read. Thank you for the memories, and I hope to keep making new ones soon.

Want to brush up on your comic book history? Click here for articles and blog posts!
For other reviews, including weekly video reviews, click here!