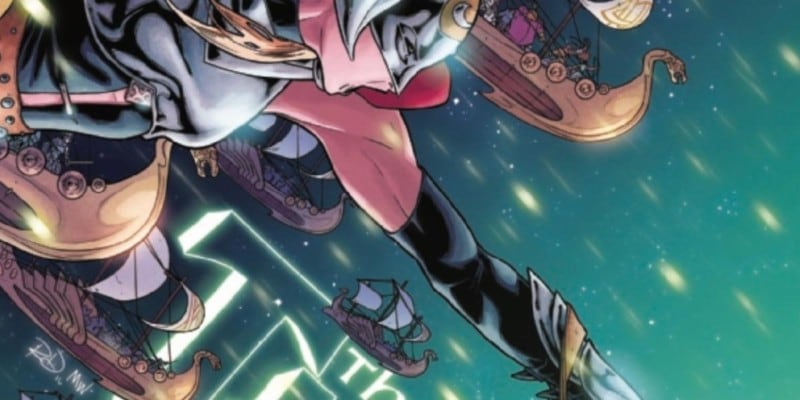 MIGHTY THOR #17 is enjoyable from start to finish. The issue begins in space, where two gods, Sharra and K’ythri, admire a supernova they turned into a “super comet” as it hurls toward a heavily populated system. As this happens, we see Thor racing towards the comet. Eventually, she turns the super comet back into a star. This feat is met with unsurprised dismay from the two gods.

I like how this opening introduced Thor in a more traditional superhero fashion. Why not have Jane depicted saving lives like it’s just another day in the life of a hero? I wish more comics went this route: make the job look routine from time to time! It’s a great way to build on both the character and mythos.

READ: New to the series? Here’s our review of MIGHTY THOR #1!

Regarding overall content, I thought the artwork carried the story. Artists Russell Dauterman and Matthew Wilson did a fantastic job with the cover and story art. The bright colors and sharpness of the characters contrasted well with the darker, softer color scheme of the backgrounds. I loved the attention to detail seen in Thor and the antagonists. Even minor details such as land masses, stars, and buildings have that little something extra about them. When you can get the reader appreciate the secondary features surrounding the main focal points, you know you have talent.

Writer Jason Aaron also did an excellent job in pacing the story, bringing it from a slow crawl to a full sprint by the end. He was able to keep the reader wondering what was going to happen next. For example, a man sacrifices his only son to Sharra and K’ythri in a scene straight from the Bible. Thor once again steps in and saves the day. And that’s that, right? Not exactly: Thor then looks to the skies and asks the gods to stop. Why is a superhero that powerful making such a desperate plea? It’s revealed in the following panel that Sharra and K’ythri weren’t just testing Thor’s worthiness, but her determination as well. Throughout the rest of this issue, we see a back and forth between the gods and Thor. I enjoyed this type of subplot implementation.

In an interesting scene, we see Loki kneel to the gods, begging for their assistance. We learn two important things from this. First, Loki needs the gods to aid him in opening up the black Bifröst that would take him home. Second, Loki sees Sharra and K’ythri challenging Thor as helping him buy time to gather his forces to continue his war. Loki is using the gods for his own means. Sharra and K’ythri don’t seem to care, as their characters are almost ‘obliviously arrogant.’ It appears Loki and the gods have a pretty solid partnership. I just hope we see more Loki, more action, and a lot less testing Thor’s worthiness just to prove a point. We’re seventeen issues in — does Thor need to keep validating herself? Let Thor stand on her own merit.

READ: Our thoughts on Dr. Jane Foster’s portrayal of Thor.

Overall, the issue is well-plotted, filled with drama, intent, and grudges. The gods tell Thor several times that she is beneath them. They won’t be satisfied until Thor kneels. This clearly brings the story along to what you know should be an eventual payoff — hopefully in the form of a battle so epic it can only be described as biblical! The issue ends with Thor gathering an army to combat Sharra and K’ythri. After challenges are made, teams assembled, and terms set, the final panels show an unknown, fiery “other-world.” I think this is a smart way to add some more drama and suspense: I am definitely interested in seeing where MIGHTY THOR leads. Jane Foster epitomizes how even something as horrific as cancer can’t weaken the spirit of the warrior that lies within us. Especially if that warrior is a goddess named Thor.