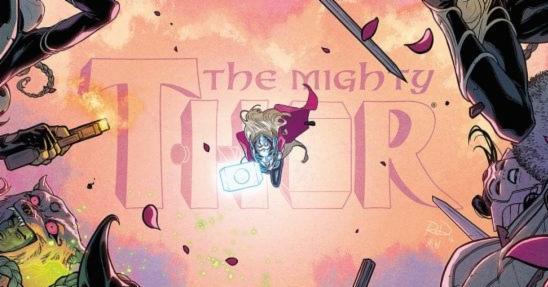 MIGHTY THOR #13 opens with a stark depiction of Jane Foster shaving the head of a fellow cancer sufferer, while mentally recalling her former ignorance of the Ten Realms. It’s a sobering sight but quickly forgotten, as the issue swiftly moves back into the mythological territory, with a covert attempt to rescue the Queen of the Light Elves from Malekith the Accursed. That actually sums up the issue pretty well, as we get a great Thor story that feels like a modern myth, but without the human elements that have helped to make Jane Foster a unique Thor.

The issue’s understanding of legend is its strong suit, as writer Jason Aaron spins another tale of modern-day Norse myth. Aaron has shown his talent in previous issues with the story of Mjolnir’s forging, but here he tells a tale of espionage that still feels like it stems from the time of Vikings (with a dash of Tolkien put in for good measure). Steve Epting’s art perfectly compliments the story, keeping the mythic look the story demands. Everything has a strong design that feels ripped from legend, from the characters to the look of the landscapes. Every detail is drawn just right, allowing the reader to see cracks in buildings without feeling like they’re seeing too much at once.

It’s also a great thrill to watch Thor and Sif reforming the League of Realms. Each one of the Ten Realms is represented, and it’s hard for anyone who’s ever played D&D not to geek out watching trolls, giants, and elves forming a group. Watching them trek along is also a highlight in itself; as Screwbeard (the dwarf) and Ud (the troll) bicker on their way through the palace, Angela smashes stuff, and Roz Solomon tries to keep the peace as they move forward to liberate Alfheim.

READ: Take a look at our review of the epic fantasy MIRROR!

The story largely works because it stays simple and tight, focusing on the mission and its implications. Sif establishes quickly that their actions are not known to Asgard or the World Congress. There’s no backup, no rescue coming for them should they fail. Yet everyone involved is willing to go forward, partly due to self-interest, but largely because the Congress refuses to see Malekith for the threat he truly is. It’s a great piece of real world frustration that everyone can relate to—taking matters into your own hands when the powers that be aren’t doing enough. Granted, they’re acting fairly responsible about the danger by acknowledging the truth, but this is something of a mirror to our own world. All this happens while still allowing for great action, such as when Thor slips Sif and Sir Honeyshot in with Mjolnir, or when their Giant ally breaks up a battle by launching a tree-arrow into the fray. This is glorious fantasy violence and anyone that’s come this far will be thrilled to watch it unfold. 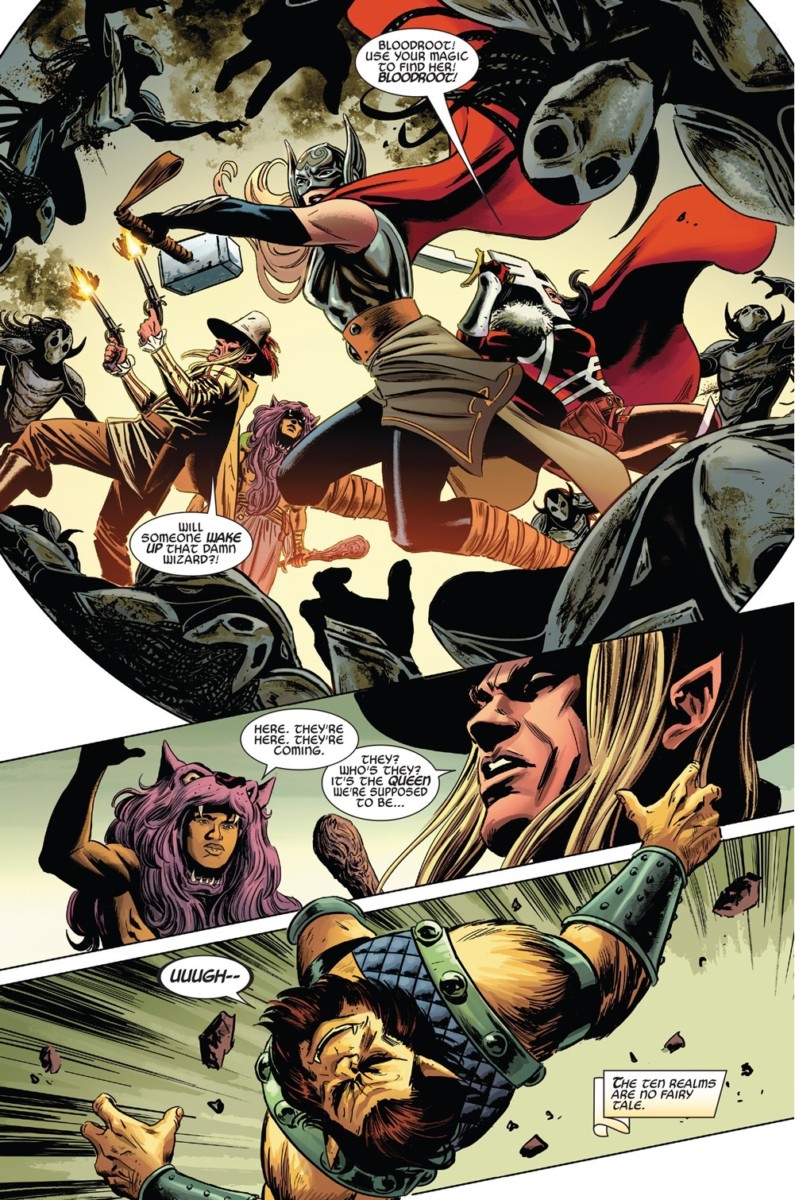 However, another piece of real-world drama fuels the only major problem with the issue—Jane Foster’s cancer monologue. When the character was first introduced as the new Thor the idea of her not only dying but that being Thor was speeding up the process felt fresh and worth diving into. Here, it’s just a few panels on how much Jane has had to learn, some thoughts on the hardship of disease, and that’s it. This unique perspective feels more like a check mark that had to be hit. It’s fairly small in the issue, but it takes the reader out of the story and gives very little back. It also begs the question of whether or not Jane Foster has just become the ‘standard’ Thor, having mythical adventures and fighting the same foes we’ve seen the original Thor fight for years while ignoring the human dilemma that made her unique. If that’s the case, is she losing her most interesting character trait?

READ: Why Jane’s cancer and how it’s shown matters to comic!

MIGHTY THOR #13 is a strong fantasy tale, with plenty of epic battles woven together by inspired storytelling and perfectly suited art. While its few ventures to normalcy feel out of place, the majority of the issue tells a strong, gripping story, with an ending that’s sure to please longtime fans and keep them eagerly awaiting the next installment. Still, Aaron would do well to keep Jane’s cancer a more dynamic presence in future issues, especially with Odinson getting closer to a new hammer of his own in UNWORTHY THOR. Because of the strong storytelling, MIGHTY THOR’s not in danger yet.