Since its first appearance in JOURNEY INTO MYSTERY #83, Mjolnir, Thor’s magical mallet, has been a staple of Asgardian mythology. Its origins have been touched on before, most notably in THOR ANNUAL 11 and THOR VOL. 2 #80. But as Jane Foster’s reign as God of Thunder continues, Mjolnir has developed (or is only now revealing) new powers. In THE MIGHTY THOR #11, it talked to Jane and even took on her appearance to divert suspicion from S.H.I.E.L.D. about Thor’s true identity. In #12 Mjolnir brings Thor to the Halls of All-Knowing, a cosmic library, where she learns details about her hammer’s history that provides some answers, but also highlights more questions.

READ: We take an in-depth look at the Mighty Mallet of Marvel, Mjolnir!

Jason Aaron is a spectacular writer; his grasp of story telling and character is deep and profound. His run on THOR has been exceptional, and with THE MIGHTY THOR #12, he brings yet another piece of lore to the Thor mythos. Using The Lord High Librarian as the storyteller, Aaron weaves a tale that feels like a story told beneath a stormy sky in the Viking Age. Odin fights a bloody battle against the trolls to protect the dwarves. In return, he receives a piece of Uru metal, a rare and precious gift. Though he initially scoffs at so paltry an offering, it becomes an essential part in his fight against the God Tempest, a storm the size of a galaxy. And there, in its aftermath, the idea of Mjolnir, a weapon made of Uru and sentient storms, comes to the fore. It’s a story big on fantastical ideas and myth. Something that Aaron excels at. 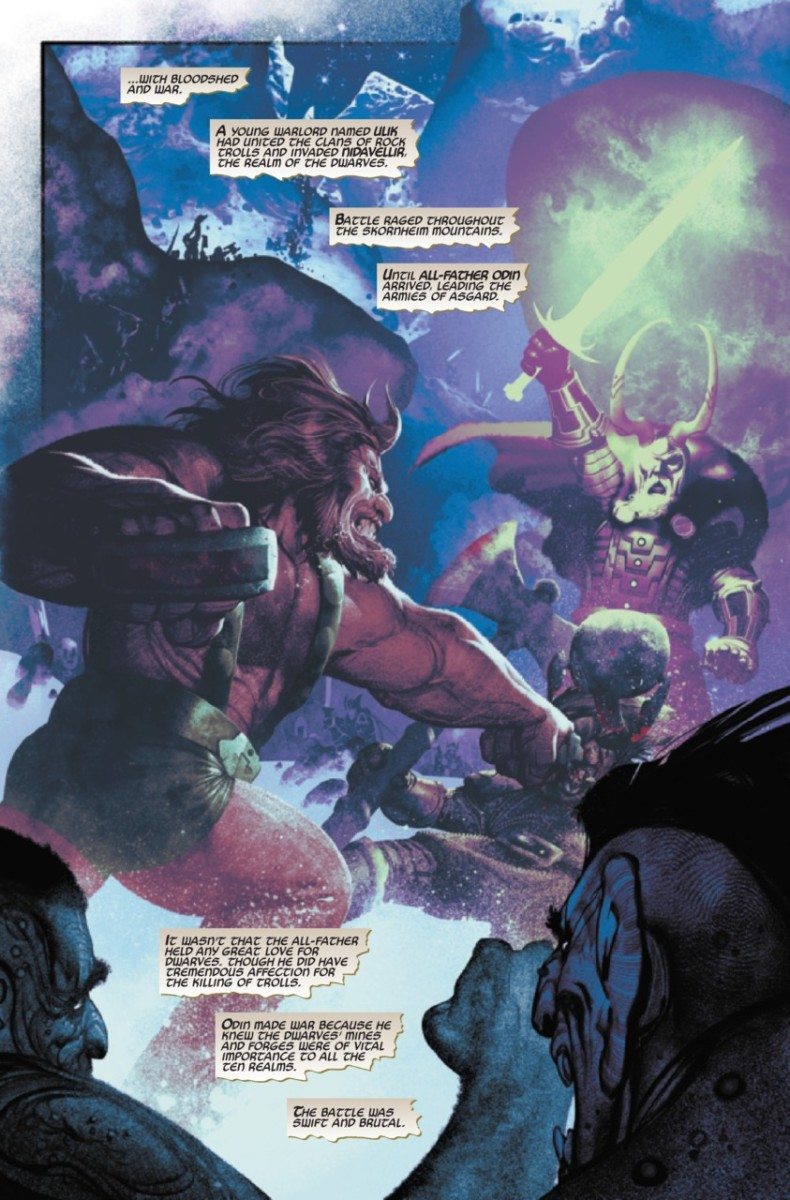 As much as I adore Russell Dauterman as the main artist on THE MIGHTY THOR, with Matthew Wilson on colors, Frazer Irving’s artistic style when the story jumps to old Asgard sparkles with cosmic energy and psychedelic colors. Irving’s art complements the tone of Aaron’s story, full of otherworldly light and storms that boil and crackle. He populates the panels with characters that feel real, their skin leathery and worn. To be honest, upon first reading this issue, Irving’s work took some getting used to, as it wouldn’t be a style that I usually go for. However by the time Odin faced off against the God Tempest, I was sold. Irving brings you to a different realm of reality, a world that is almost too bright, and too dark, to comprehend. There is some astounding imagery on show here, with one panel, the dwarves of Ivaldi hooking and dragging a star down from the night sky, summing up the fantastical elements of this tale.

By the end of the issue, there is a certain air of mystery about Mjolnir, and an almost heavenly glow surrounds it. As a standalone issue, it is an astounding throwback to Norse Mythology. The creative team cranks out an epic adventure that is bound to leave you breathless. THE MIGHTY THOR #12 is indeed a tale to astonish!