The original Pink Ranger is going solo, and this series proves that she does not need her colorful counterparts to shine. This series finds the perfect middle ground between the classic TV Shows 90s camp and the new angsty-teen movie reboot. MIGHTY MORPHIN POWER RANGERS: PINK SC captures everything you love about Power Rangers with way more character depth than you would expect. However, in some aspects, it feels like the Pink Ranger takes a backseat to less compelling story elements.

READ: For those new to Power Rangers Comics, Why Aren’t You Reading: POWER RANGERS?

The series begins with the retired original Pink Ranger Kimberly Hart pursuing her dreams of professional gymnastics. She is struggling with her post-Power Ranger identity. Kimberly is guilty about retiring from the team and shirking her heroic responsibilities. After her mother disappears, she gets back into action and must morph once again. The most compelling aspect of this series is the strange curiosity of seeing your favorite childhood TV show hero struggle with real world issues. The juxtaposition of the goofy Power Rangers brand with existential dread is a powerful combination. Tonally, this series volleys back and forth between classic Power Rangers storylines and updated character portrayals. It is a unique reading experience. The 90s kids who grew up with the Power Rangers as kids can now appreciate this more mature series as adults. It’s a great feeling to grow up with your favorite characters. 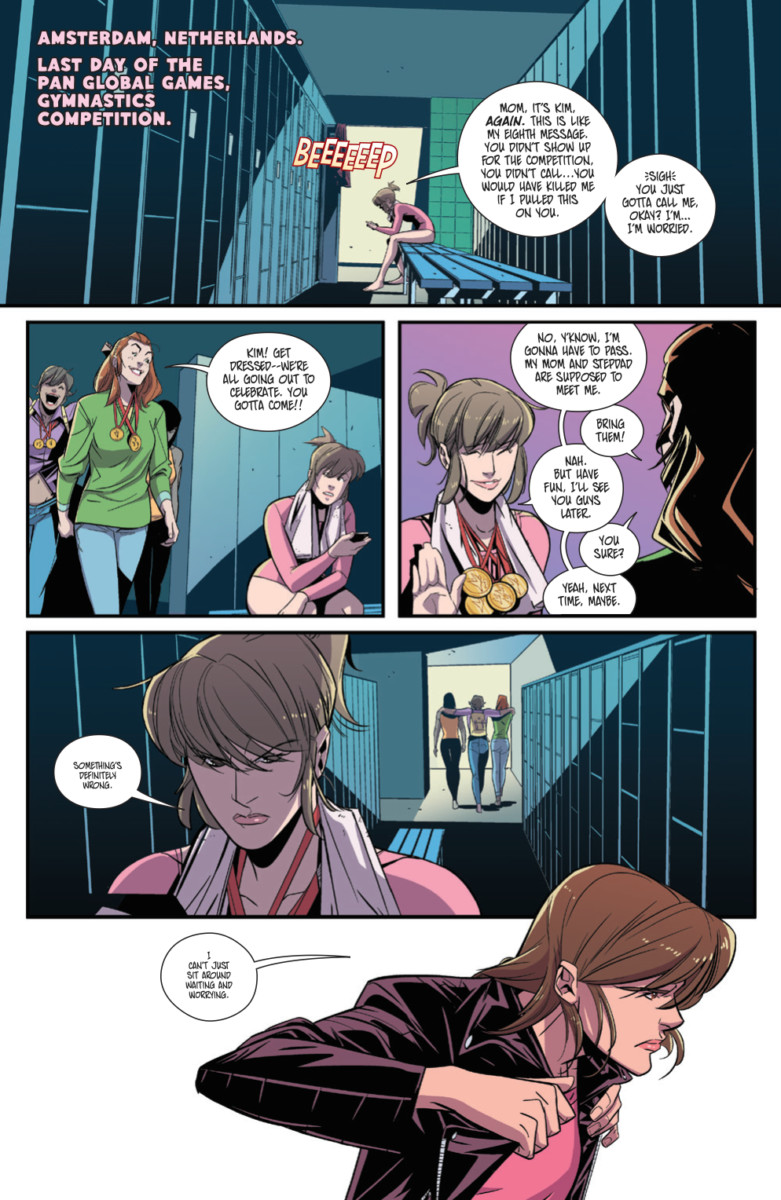 Getting the Team Back Together

The plot of the series is standard Power Rangers fare. The classic villain, Goldar, and his team of amphibious monsters kidnap everyone in Kimberly’s mom’s town. This task is too much for the Pink Ranger to handle on her own, so she recruits former and new Rangers. What ensues is a lot of Zord fights and dramatic posing.

The emotional heart and most interesting section of this book are in the first and last few pages. In those scenes, Kimberly is alone, contemplating her place in the world. Despite, an ongoing narration throughout the book,  Kimberly gets somewhat lost in the fray amongst her team. The book is foremost a fun and action-packed throwback, so this shift is understandable. MIGHTY MORPHIN POWER RANGERS: PINK SC keeps the fights, monsters, and quips coming and there are definitely enough classic Power Rangers moments to satisfy any fan. However, it is somewhat disappointing that the titular Ranger is not given as much focus as she deserves at the expense of more action.

The Pink Ranger is also overshadowed by the incredible portrayal of the villain Goldar. This formerly one-note villain sidekick receives an entire arc and has some greater banter with the Pink Ranger. He even struggles with killing his enemies, which is a meaty issue for The Power Rangers to tackle. We see hints of his dissatisfaction with his boss, Lord Zedd. MIGHTY MORPHIN POWER RANGERS: PINK SC gives its villain room to breathe. It is fascinating to watch him ruminate over his choices from panel to panel. 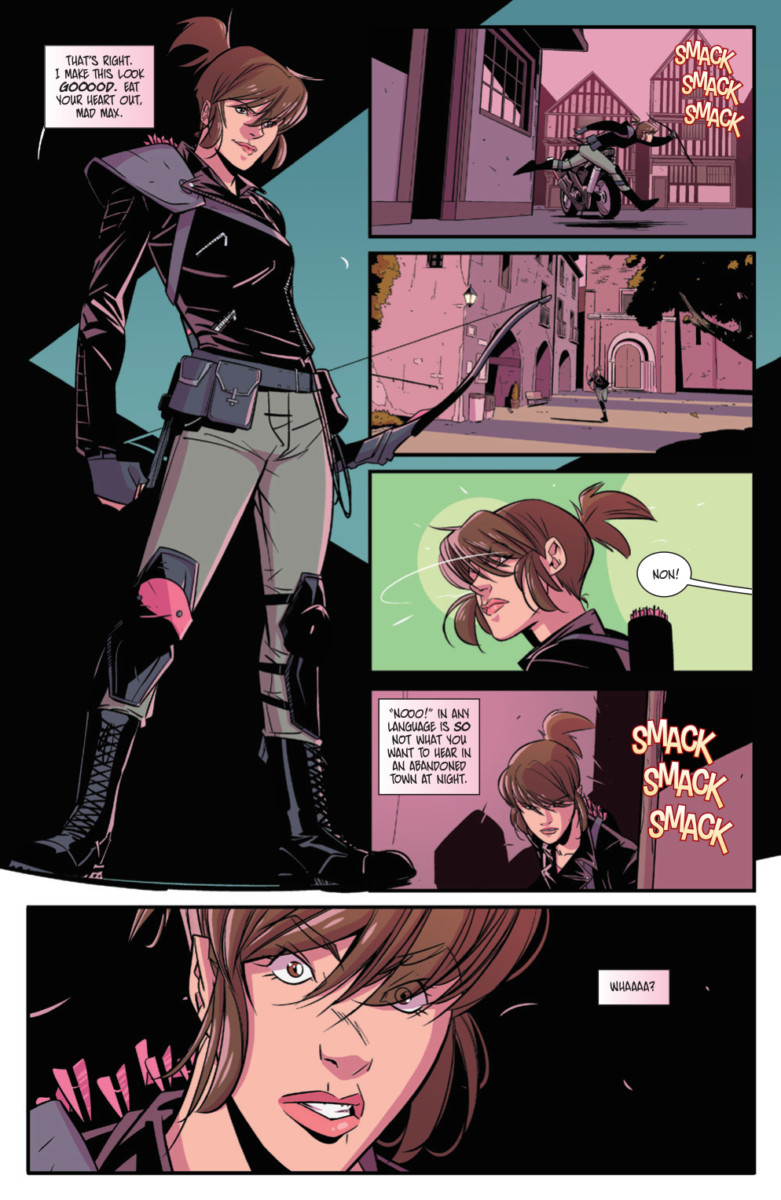 Daniele Di Nicuolo’s art is poppy and fun. The exaggerated and anime-infused style perfectly suits the big bloodless action set pieces. There is a flurry of movement in every panel, which is an excellent pairing to the kid-friendly action. Di Nicuolo has mastered the pose-heavy fighting style of the original series. You will feel like you are back in the 90s playing with your action figures and watching the Power Rangers on a Saturday morning.

The monsters in MIGHTY MORPHIN POWER RANGERS: PINK SC have that same blend of creepy awkwardness that the original series did so well. The Mighty Morphin Power Rangers TV Show had a lipstick monster, a pumpkin rapper, and a robot goat. Goldar and his Creature-from-the-Black-Lagoon-inspired henchmen have that same foam-rubber, lumbering look. Di Nicuolo did a great job re-designing and translating the 90’s cheesiness to the page. 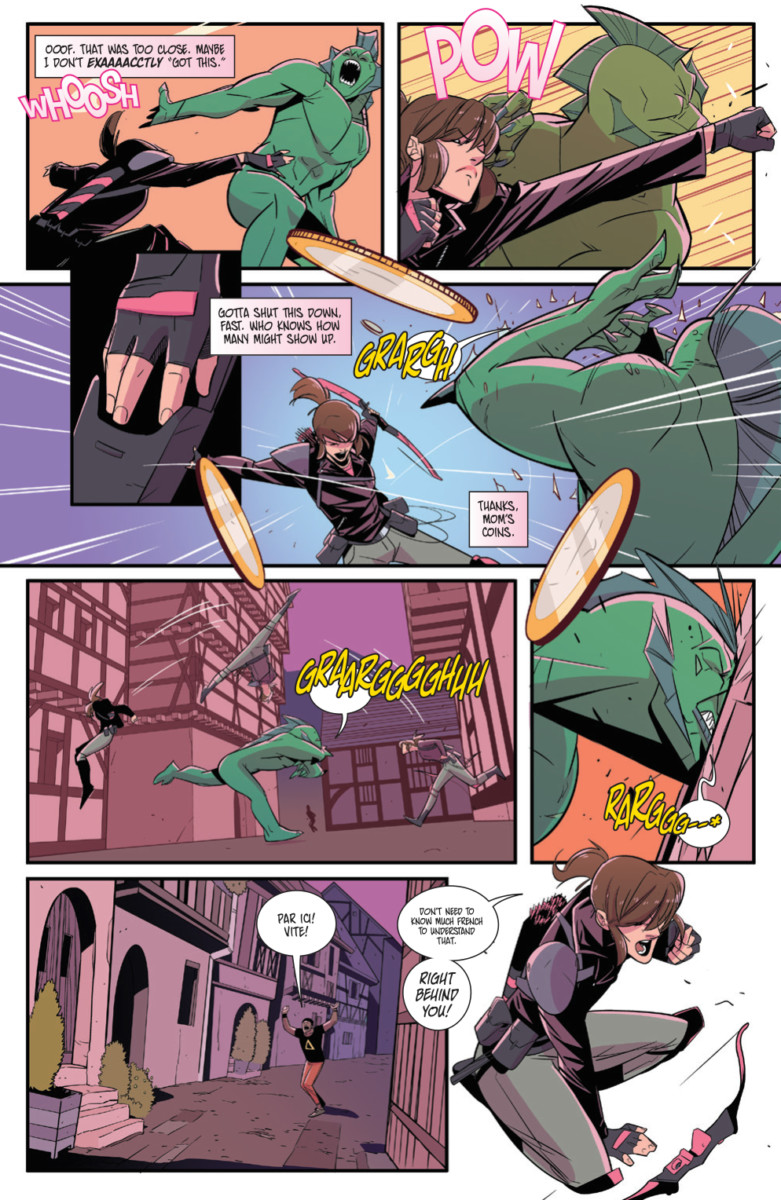 MIGHTY MORPHIN POWER RANGERS: PINK SC is a fun dive back into 90s nostalgia with more character exploration than you would expect. Despite a watered down focus on the Pink Ranger herself, this series will definitely make her your favorite ranger. It’s a wild ride throughout. It will be interesting to see how other Power Rangers characters are similarly fleshed out in future series.