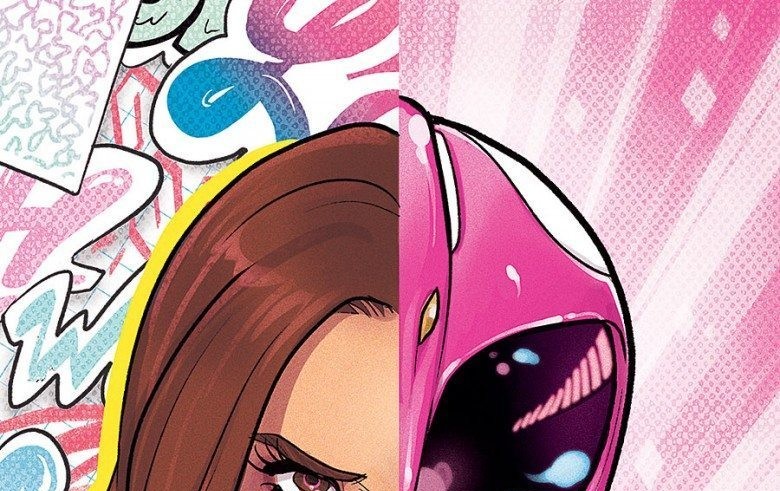 Earlier this year, Boom Studios launched a new version of the MIGHTY MORPHIN POWER RANGERS with a great deal of hype. The title more than lived up to expectations, becoming a critical and commercial hit. With its success, many thought it would be inevitable that the company would begin branching into other eras of the franchise’s twenty-year history. Boom’s first step in that direction comes in MIGHTY MORPHIN POWER RANGERS: PINK #1 from the writing team of Brenden Fletcher and Kelly Thompson and artist Daniele Di Nicuolo. The mini-series follows original Ranger Kimberly Hart (played in the television series by Amy Jo Johnson) after the character left the series in the third season to participate in the Pan Global Games.

The issue begins with Kimberly, fresh off another gymnastics victory at the Amsterdam-based Games, attempting to contact her mother and step-father with no success. Worried, she bolts off on her motorcycle to their French home reminiscing about her lost Ranger power along the way. When she arrives at the village of St. Moineau, she initially finds it deserted. After investigating her parents’ home and arming herself with a bow and arrow, she comes to the aid of a young man being attacked by two sea-monster looking creatures. After saving him, the man identifies himself as Serge and explains that weeks ago the creatures overtook the town and people have been disappearing ever since.

Seeing that the situation is out of her control, Kimberly uses her old communicator to call Zordon for help, hoping he’ll send the Rangers. However Zordon informs her that the Power Rangers are off-planet fighting Lord Zedd. He instead offers to temporarily reactivate Kim’s Ranger powers. After momentarily debating, she accepts and is granted a new Pink Ranger suit. With her new powers and information from Serge at her disposal, she tracks the creatures to a cavern, only to discover her mother captured by a villain she recognizes all too well.

As a longtime die-hard fan of the franchise, MIGHTY MORPHIN POWER RANGERS: PINK #1 sounded like it would be a dream comic book for me when it was first announced. The idea of picking up dangling plot threads from the series, especially regarding actors who left the show, was one that I was really hoping Boom would tackle. There was perhaps no character that fans were more curious about than MMPR original Kimberly Hart. Beyond that, the book brings together two of my favorite current creators in comics: Brenden Fletcher (GOTHAM ACADEMY, BATGIRL) and Kelly Thompson (A-FORCE, JEM AND THE HOLOGRAMS), who both excel at writing female characters. I’m happy to report that the issue not only lived up to that hype, it surpassed it.

As would be expected, the issue is built around Kimberly and does a fantastic job with her character. Fletcher and Thompson smartly establish that Kim’s been incredibly successful at the Pan Global Games, while at the same time showing that she’s still nostalgic for her days as Ranger. This makes continuity sense given the conflicted feelings that the character had when she left the show during the “Another Shade of Pink” arc on the TV series. I particularly enjoyed Kim’s inner monologue about buying a motorcycle because it reminded her of riding her Shark Cycle. It fits perfectly within the story, but at the same time is a nice nod to the fandom who will get the reference to the little-used vehicle. Little touches like the bike and Zordon’s use of the Sword of Light to restore Kim’s powers are nice callbacks for fans, but don’t feel overtly fan-servicey because of how well they’re written. In fact, even with those callbacks, the book completely works as a standalone read that non-fans can enjoy. From a plot standpoint the issue is a bit light, focusing more on Kim as a character for most of its duration. However, the mystery works, and the reveal at the end is fantastic. The villain makes total sense, has a personal history with Kimberly, and is a favorite of longtime fans. 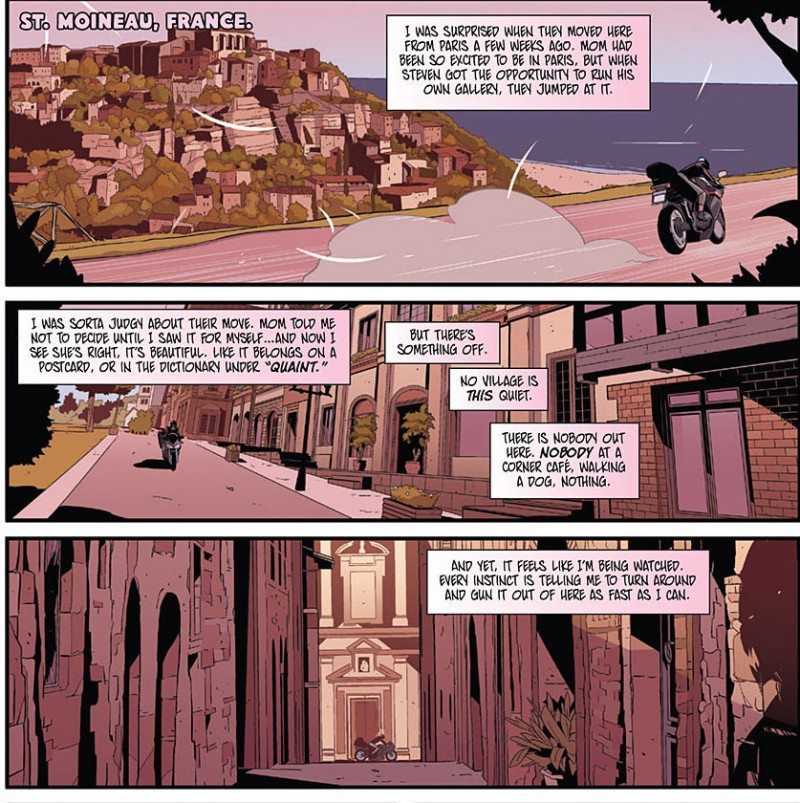 Artistically, I was a big fan of Di Nicuolo’s work on this book. Kimberly herself looked great, capturing the essence of Amy Jo Johnson while still looking like a fleshed out comic book character instead of a photo-realistic version of the actress as happens in some licensed product adaptations. I particularly liked how her outfit had hints of a Ranger suit, a subtle hint to Kim’s desire to get her powers back. Speaking of outfits, Kim’s redesigned Pink Ranger costume looks great. It’s instantly recognizable, while at the same time clearly different from a normal suit, emphasizing its temporary status. I would also be remiss if I didn’t bring up how beautiful the book’s European landscapes look. The writers made a smart choice basing the series there as the locale has rarely been seen in the franchise, and Di Nicuolo completely nails them.

I can’t recommend MIGHTY MORPHIN POWER RANGERS: PINK #1 enough. The story is welcoming to new readers hungry for a well-written female protagonist, while at the same time acknowledging long-running loose ends from the series in a way that die-hard fans will enjoy.