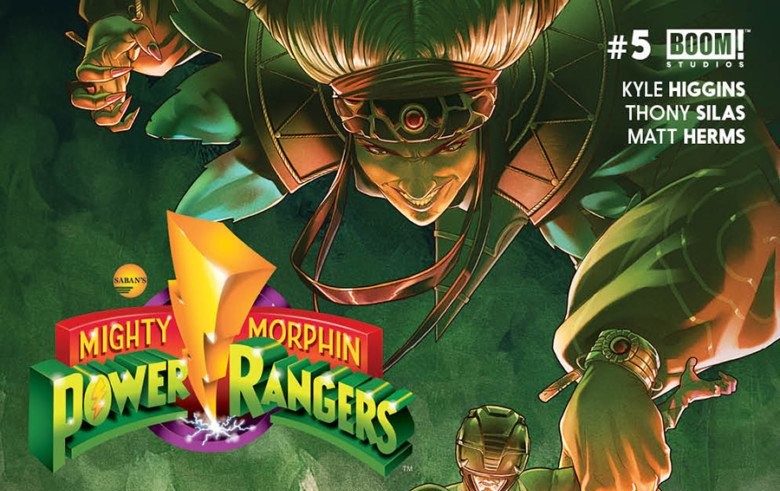 The first four issues of Boom Studios’ MIGHTY MORPHIN POWER RANGERS series have all been part of the same story arc and time period. Set within the show’s first season, the comic has told a linear tale centered around the formerly evil Green Ranger, Tommy Oliver. However, writer Kyle Higgins and guest artist Thony Silas flip the script with the fifth issue, venturing back into POWER RANGERS mythology for an untold story that still ties into the book’s on-going narrative.

The issue begins in Italy, one month before Tommy came to Angel Grove, with a speech from the Italian Prime Minister vowing that his country will not cower in fear to Rita Repulsa. His resolve is quickly put to the test as Rita releases a giant monster on Rome. The Rangers arrive prepared to battle the monster but are initially out-gunned. They prevail after some quick-thinking from Zack; however, the Black Ranger is overshadowed by praise for Jason in the battle’s aftermath. Sensing Zack’s jealousy, Rita abducts him and brings him to her Moon Palace. She attempts to convince Zack that she’s simply misunderstood thanks to manipulation from Zordon. 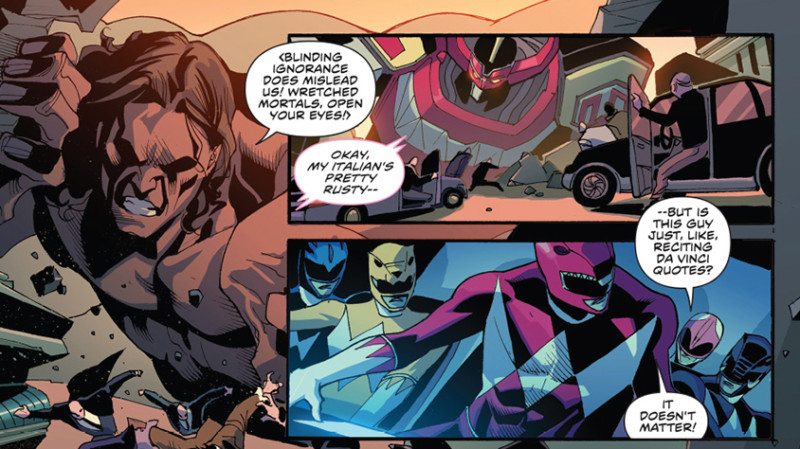 Once Zack lets his guard down, Rita offers the teen the Green Ranger’s powers and command of her forces. Zack plays along until he can escape. He warns Zordon of Rita’s plan to create her own Ranger, but the two decide not to tell the team. Meanwhile, Rita ruminates on her failure before discovering Tommy and deciding to bestow the powers on him, setting “The Green Ranger Saga” and the first four issues of the comic in motion. However, a mysterious presence at the end of the issue seems to foreshadow the devastation that hit the Rangers at the end of issue #4.

As a major fan of the POWER RANGERS franchise, I’ve been exposed to a lot of Rangers-related media over the years and I can honestly say that MIGHTY MORPHIN POWER RANGERS #5 stands out as one of my favorite pieces. The conceit of the story is brilliant. Higgins takes advantage of the comics medium to go back and play with the timeline here, while not retconning anything out of continuity. It’s a tip of the cap to longtime fans who know the history by heart. At the same time, there’s no foreknowledge of said continuity needed to enjoy the story. Anyone who’s read the previous issues of the series will understand everything that happens here. It’s essentially a perfect use of fan service. 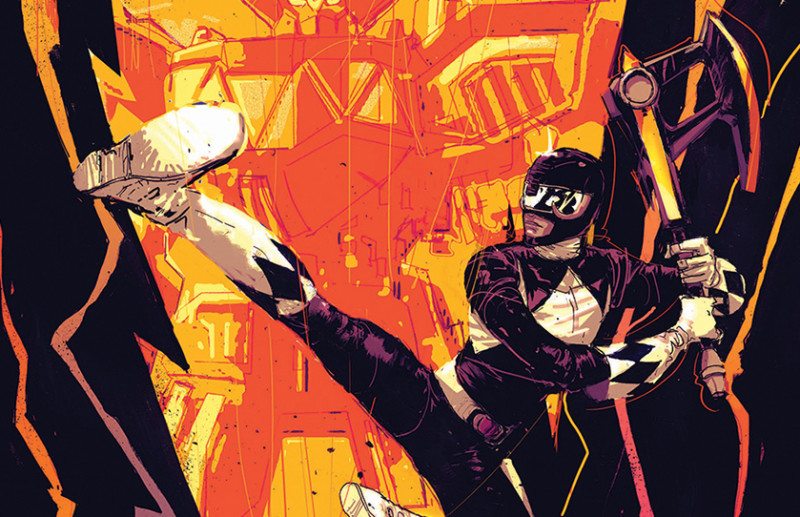 LISTEN: Check out our latest Podcast episode focused on SAGA!

Beyond continuity, the idea that Rita would initially have tried to recruit one of the original team to be her Green Ranger just makes for a good story. For starters, it makes sense that she would initially want to give the powers to someone who’d proven they could survive using Ranger-powers. On top of that, early on in the series all of the Rangers had doubts about what they’d gotten themselves into, so again it’s fitting that Rita would think she could get into one of their heads. Rita’s failed temptation of Zack also provides a reason why Rita recruited a total unknown like Tommy to adopt the powers, a plot point that was never really explained despite the character’s long history in the series.

While I’ve been a big fan of what Kyle Higgins has done in the first four issues of the series, character-wise they were focused almost exclusively on Tommy. Therefore, it’s a welcome treat that MIGHTY MORPHIN POWER RANGERS #5 focuses of Zack. Higgins uses the opportunity to dig into what makes Zack tick on a couple of levels. His jealousy of Jason is an interesting wrinkle to give the character but makes sense given Zack craves attention from audiences. Furthermore, this desire to do more for the world is some really nice foreshadowing of the character’s eventual departure from the Rangers to attend a peace conference. 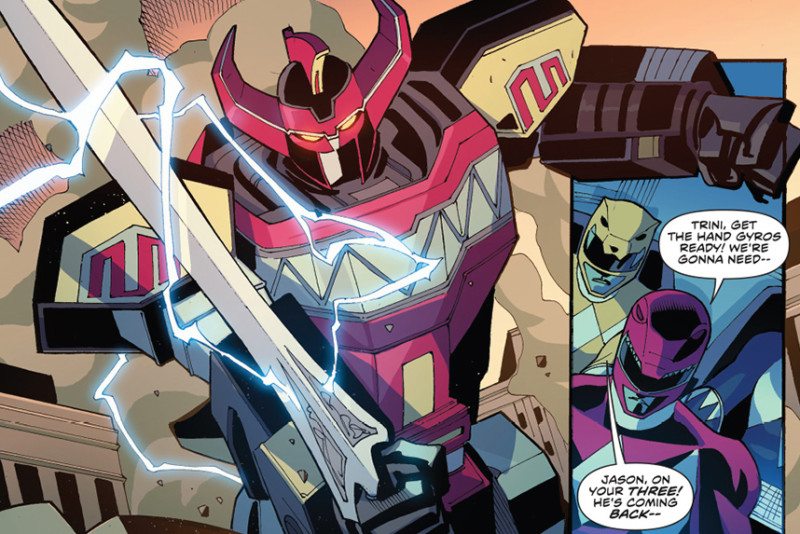 Artist Thony Silas fills in for regular series artist Hendry Prasetya and does a pretty solid job. The Megazord fight scenes aren’t nearly as crisp as Prasetya’s, but they’re only a small part of the issue. A majority of the issue features an unmorphed Zack dealing with Rita through conversation, and Silas (who provides his own inks) really executes these scenes well. The fact that his Zack is more expressive and emotive than Prasetya’s version of the unmorphed teens helps tremendously.

MIGHTY MORPHIN POWER RANGERS #5 is a fantastic read. Kyle Higgins and Thony Silas craft a tale that will delight longtime POWER RANGERS buffs while still appealing to fans who’ve only read the previous four issues of the series.