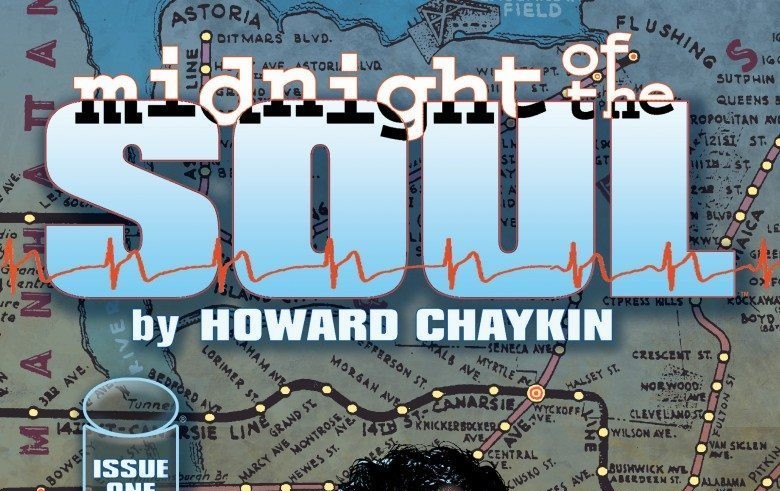 MIDNIGHT OF THE SOUL is a brand new series by Howard Chaykin that finds its home among adult readers. Its mature subject matter and setting may not be relatable to the younger audience, but the older readers and history buffs will surely find the series intriguing.

Set in 1950, MIDNIGHT OF THE SOUL #1 functions primarily as an introduction to the character Joel Breakstone. For the last five years, Joel has been living a stagnant life with his wife in an unidentified suburban town. He is a World War II veteran, and since the end of the war, his life overall has been pretty pathetic. He is a shut-in, living in a house that he signed over to his brother-in-law for the money. Joel considers himself a writer, but his story about an alternate reality where the Nazis win WWII (kind of like the TV show MAN IN THE HIGH CASTLE) is not attracting publishers. If that’s not depressing enough, he wallows in self-pity and seems to only finds solace at the bottom of a liquor bottle. 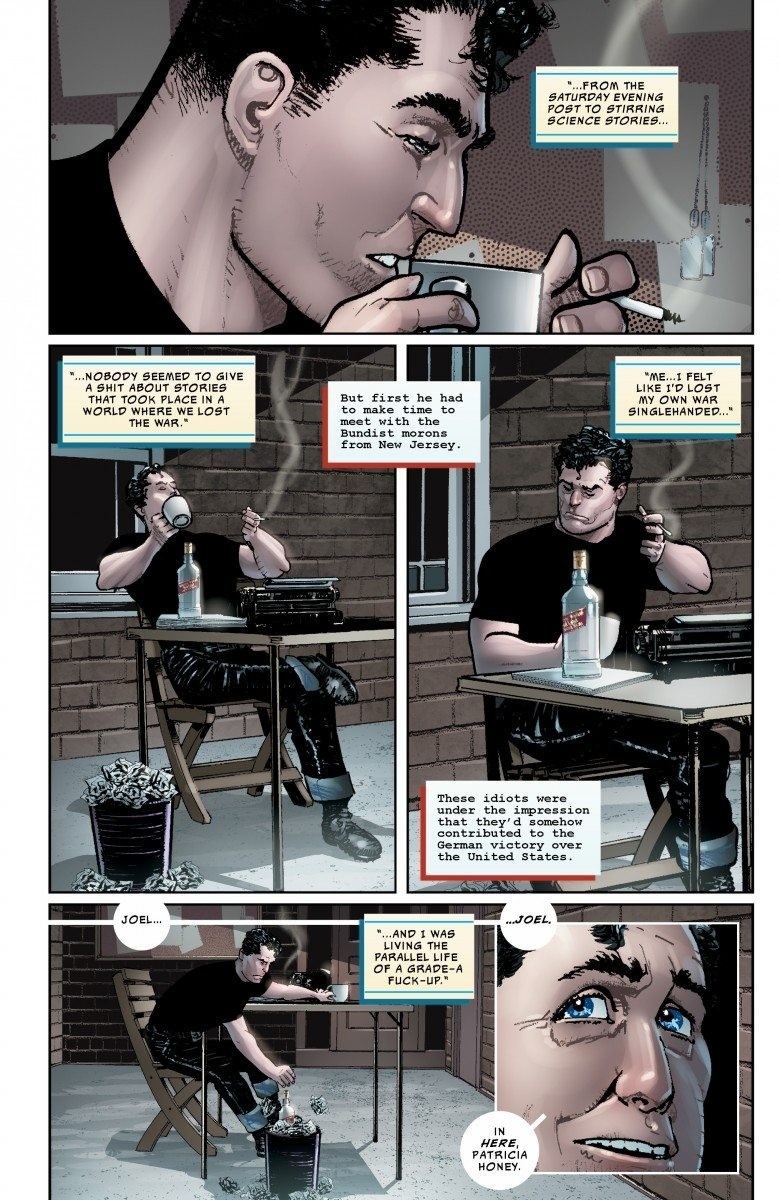 I like where Chaykin is going with the development of Joel Breakstone, and he does a lot to get his point across. Normally, I like characters to have a lot of background and be well-characterized, and I found this to be the case for every main character in this comic. However, Chaykin beats the reader over the head with the sullen life that Joel lives and the past horrors he has faced. There are a lot of pages and panels dedicated to Joel’s problems, which in itself is a problem because the “hero” begins to feel annoying rather than sympathetic. The early part of MIDNIGHT OF THE SOUL #1 focuses on Joel’s time in the war. This would be fine, except it continues to the present day with images of Joel drinking liquor added into the panels. The emotional overkill continues in scenes describing Joe’s relationship with his wife. It would be enough for Joel and his wife to have a verbal fight, but afterward, Chaykin includes Joel’s hostility with his brother-in-law. 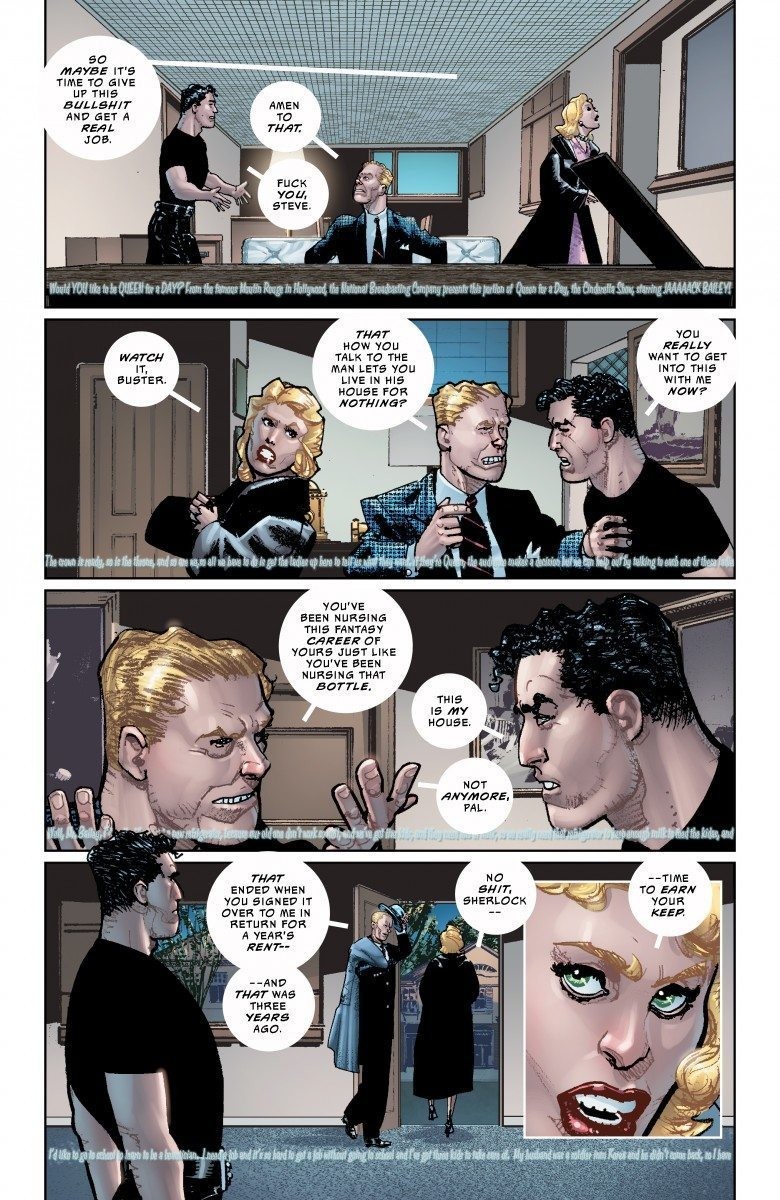 Even though there are some things that could have been left out of the issue in terms of character development, the direction of the story is great. After establishing the terrible and scarred life that Joel lives, Chaykin uses Joel’s alcohol addiction to lead to the turning point of the series. Joel goes looking for hidden bottles of booze and stumbles upon something that his wife has hidden from him. This pivotal moment feels natural and fits nicely within the established narrative, which deserves praise.

READ: Image Comics keeps getting better. Learn how they became a top publisher!

The art, which is also by Howard Chaykin, is well done. The art in the panels flows together to show how troubled Joel is and how lost he is in his own mind. For example, there are a few panels that show a record spinning on a record player, then transitioning to Joel driving in circles on his lawn that are the same size as the record. It is hauntingly beautiful. The transition feels almost cinematic in its progression and gives the sense that the spinning record dissolves into the circles on the lawn.  Though the direction is great, I do have a gripe with the inconsistencies that appear in the drawing of the characters. While his art is generally strong, Chaykin falls victim to the lack of consistency in facial depictions that often appears in his work. 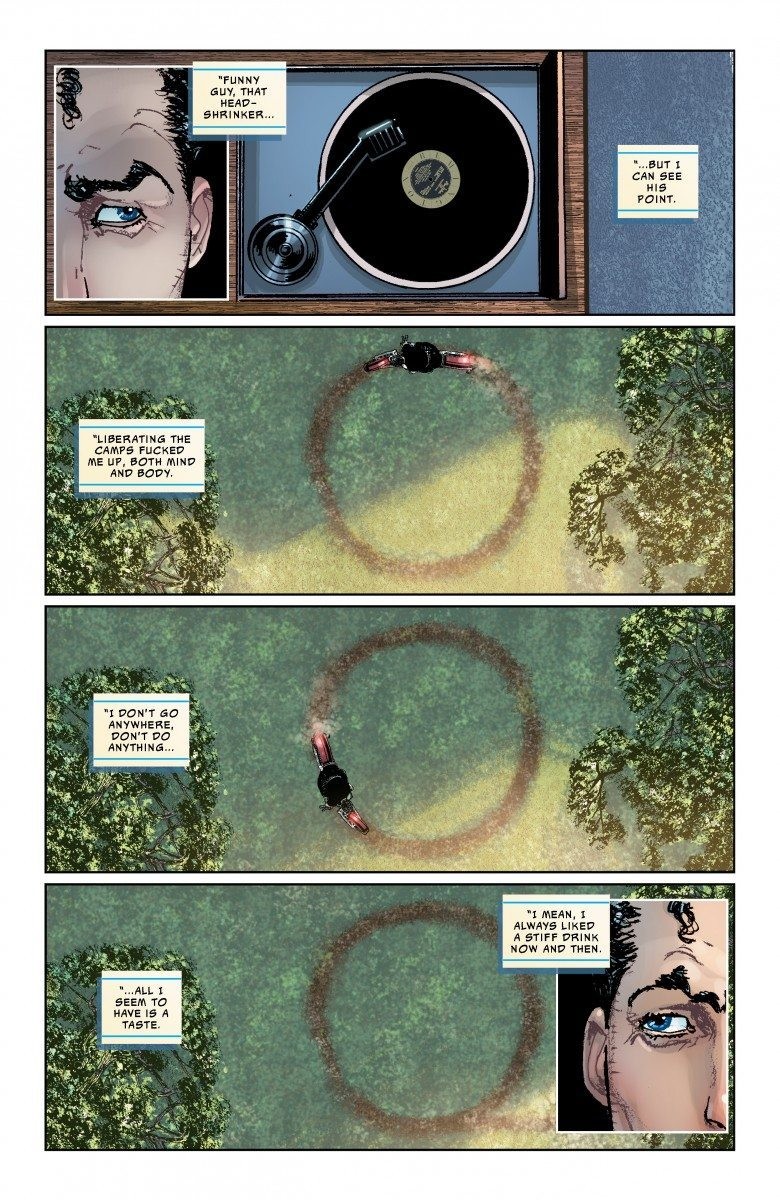 Overall, MIDNIGHT OF THE SOUL #1 is an interesting, mature take on the life of a post-war soldier. There may be too much exposition of Joel’s character, but the story that leads into the next issue is intriguing enough to warrant a read. I do hope MIDNIGHT OF THE SOUL #2 backs off of the references towards Joel’s past and current pathetic life, as I can see it becoming very boring very fast. Instead, I would like to see the main focus on Joel’s new adventure as he finally leaves the house. I want to see him in action! He now has a problem with his wife that needs to be taken care of, and hopefully that’s what we focus on in the next issue.