Deadpool: The Merc With a Mouth, The Crimson Comedian, Wade Wilson. As of late, it seems that he is getting the “Wolverine” treatment. Wade appears in numerous books each month. At this point, it doesn’t look like it’s going to end anytime soon. Yet another monthly book has been announced and follows Deadpool’s adventures teaming up with various characters from throughout the Marvel Universe. Following the success of the Wolverine movie, Deadpool will soon star in his own movie! Where will it end for the Merc With a Mouth? Is he overexposed to the point where fans will soon start to despise him? 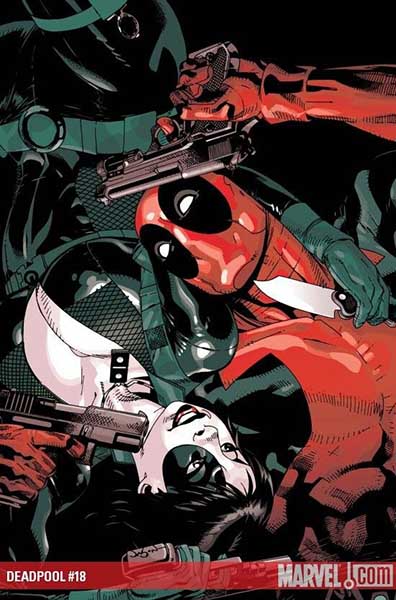 The fanboy in me says that Wade’s exposure is a great thing. The more monthly books and appearances, the better! But is this truly the case? Could three monthly books, various cameos and a major motion picture spell disaster for everyone’s favorite merc? The fate of Mr. Wilson lies squarely in the hands of the brain trust at Marvel. Marvel typically uses Wade as a B-list character, never involved in any major storylines until recently. The first issue of DEADPOOL showed that Wade played a huge role in the Skrull invasion. Now, rumors exist he’ll be a part of upcoming storylines involving both the X-Force and the Uncanny X-Men.

Deadpool’s history with Marvel isn’t on his side. Every time he gets close to stardom, Marvel pulls the plug on his book. Although I don’t see that happening now, it still has to lurk in every fan’s mind. Sales numbers, although not confirmed, have been rumored to be high for every Deadpool book. That alone means that the Deadpool craze will continue. If the current craze continues we could very well see Deadpool’s mug right up there alongside Wolverine, iron Man and Spidey as the face of Marvel Comics. 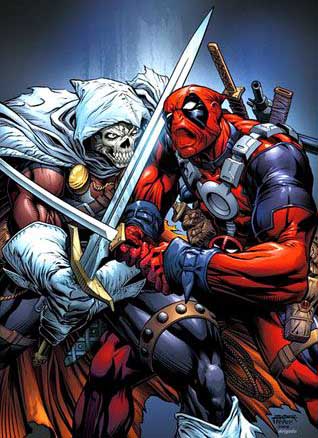 The million dollar question is could we honestly see a mercenary with a penchant for sexual innuendos and murder become the face of a comic company recently bought by Disney? In society today, the answer is a resounding YES! Society is much edgier than when Marvel first started and Deadpool is the perfect character to lead them into the changing times. Pop culture embraces other characters with sexually-charged and/or violent characteristics, so why not Deadpool? Deadpool is the perfect mix of comedy and action that Marvel needs to really push forward. In a nation obsessed with celebrities, sex, and war, why not have Deadpool leading the comic charge? It only makes sense.

The news of the Deadpool movie has only fueled the Deadpool fire. With Ryan Reynolds playing the leading man, it’s sure to attract both casual and hardcore fans. Hardcore fans will watch to see their favorite merc in live action and the casual fans will watch, because well, it’s a Ryan Reynolds movie. Is Ryan Reynolds really the right guy to play Wade though? Sure, he’s got star power and will help attract both the ladies and casual fans, but does he have the chops and the attitude to really pull off the mouthy mercenary? In my heart of hearts, I believe he will do great. I mean the looks don’t matter because, duh, Deadpool always wears his mask and judging from the Wolvy movie, Reynolds has the physique to pull it off.

IMHO: DEADPOOL, MERC WITH A MOUTH

In my honest opinion, I think they have hit the nail on the head with this choice. I can’t think of a better actor to play the Crimson Comedian. His brief stint in X-MEN ORIGINS: WOLVERINE showed that Reynolds can pull off the attitude necessary to be the greatest mercenary alive. Even better, Reynolds himself is a huge Deadpool fan and that by itself leads me to believe that he is the perfect choice for the character. Fanboys and fangirls alike are salivating at the thought of a Deadpool movie and only time will tell if Ryan Reynolds can truly portray the Deadpool that we know and love.