In recent years, female nudity has been a centerpoint in many movements. Go to a Slutwalk, and you’ll see topless women holding signs that say “Still not asking for it.” There’s also #FreeTheNipple, an online campaign on the double standard where men can be publicly shirtless but women cannot. We also have some reactionary movements, such as increased focus on female dress codes in schools. School officials claim that a girl’s bare shoulder or thigh would be so distracting that male students wouldn’t be able to focus on their studies.

What do all these movements have in common, whether radical or conservative? They all focus on the cultural belief that female bodies are inherently sexual and male bodies are not.

Der-shing Helmer’s ongoing webcomic THE MEEK also tackles this subject. THE MEEK is the story of Angora, a girl with mysterious powers who has grown up in the jungle on the outskirts of two warring empires. Like most teenage girl fantasy protagonists, she is a rebellious but kind-hearted chosen one who must go on an epic quest to save the world. Unlike most teenage girl fantasy protagonists, she chooses to do this without wearing a shirt. 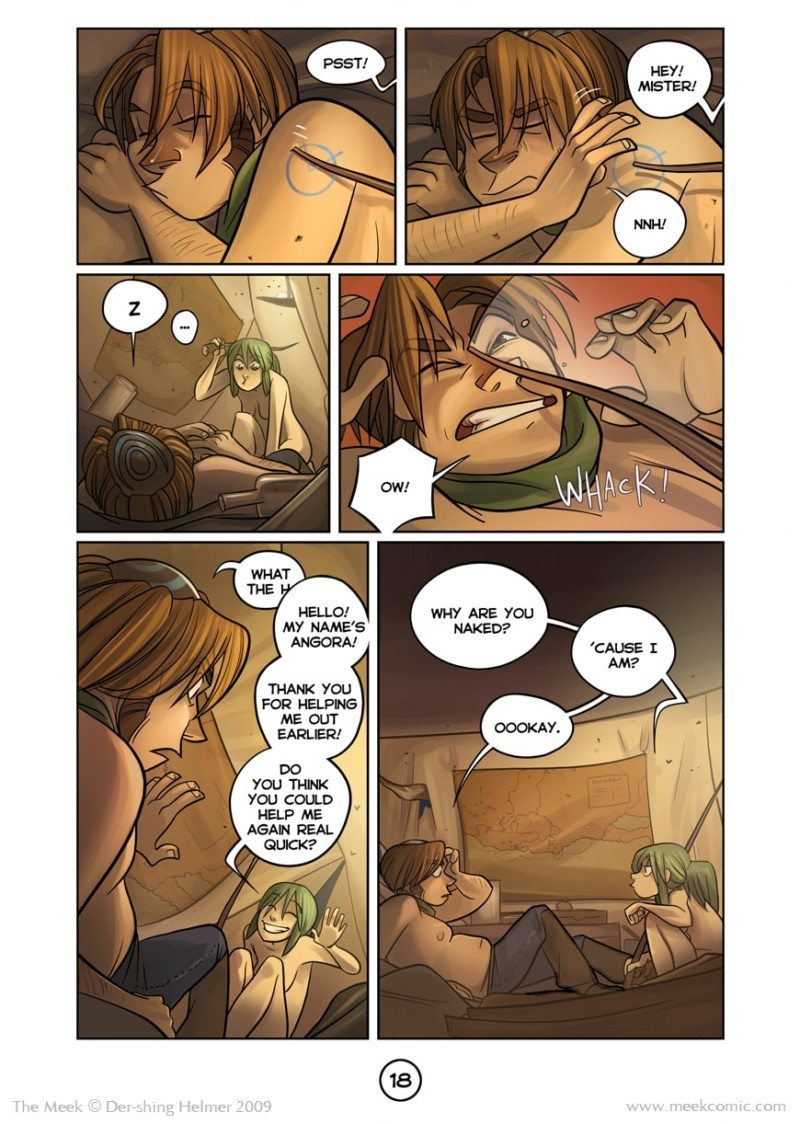 It’s not that Angora actively chooses this as a political statement, however. The thing is, Angora has spent years of her life in the wilderness with no one but animals and mythical beasts to keep her company. She didn’t grow up with humans and thus has not internalized the message that she must always cover herself up.

However, whether or not Angora has internalized that message, other characters transpose it onto her. For instance, in the very beginning of THE MEEK, Angora has reemerged to society completely naked. She knows that she must go to the capital city to help stop a powerful monster there. However, when she asks a group of male workers at a campsite for directions, they assume from her nakedness that she is propositioning them for sex.

They start chasing her and ignore her increasingly negative reactions to them, treating her as a piece of meat they have to hunt down. Angora is aware that these men are dangerous and asks Pinter, a nearby mapmaker, to help her. Luckily, Pinter distracts the men, allowing Angora to escape. 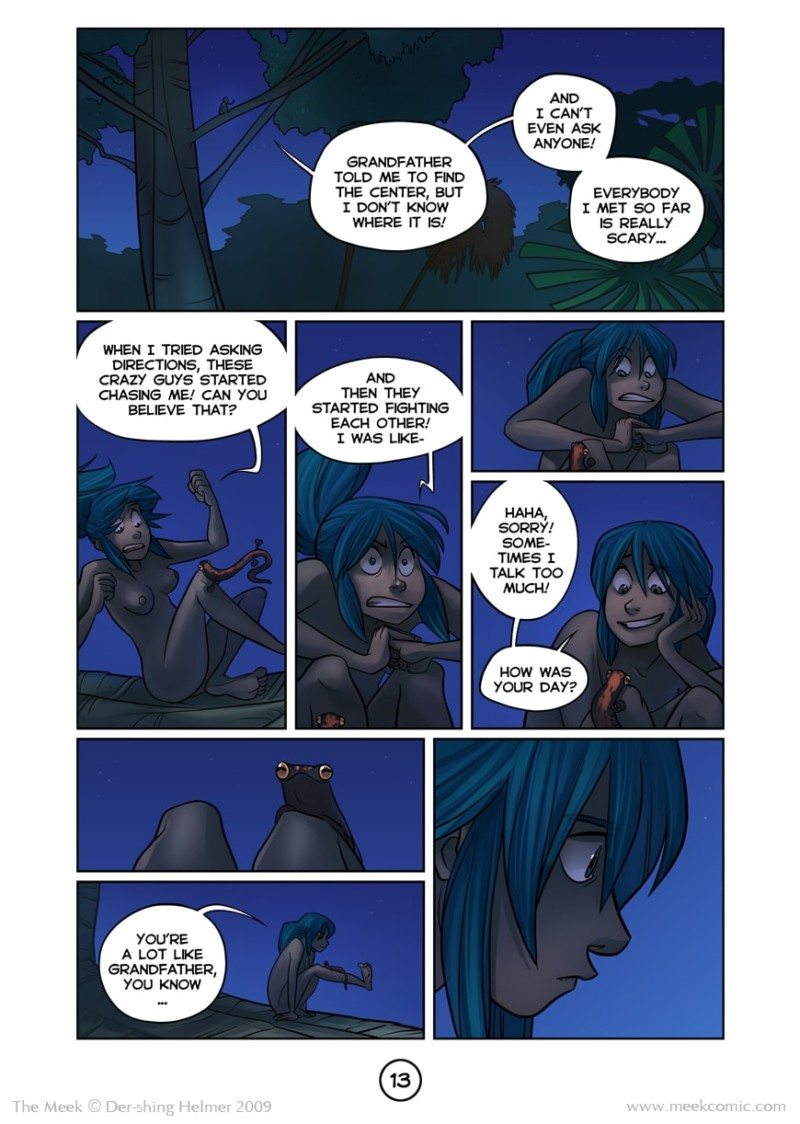 Angora has no real awareness of what just happened. She calls the men “crazy” for chasing her and keeps making jokes about how weird they are. If she had any concept of the fear of rape, she probably would have been way more scared than she appears to be. In Angora’s mind, there is no correlation between her nakedness and the men’s aggression towards her. And why would she have made that connection? The concept that women provoke men into a state of wild, animal-like behavior based on their dress doesn’t reflect the real wilderness at all. Real animals are all naked, and they’re not constantly having aggressive sex. Why would it be any different for humans?

Angora’s lack of awareness of rape tells us a whole lot about the socially constructed nature of rape culture. Rape culture paints rapists’ actions as “natural” and shifts the responsibility of those actions onto the survivors of sexual assault. By this logic, whenever women wear revealing clothing, they are “asking for it,” taunting the natural instincts of men to rape. However, in THE MEEK, there is nothing natural about this at all. Angora knows natural. Flowers bloom in her hair. She can heal people with moss. She has been naked in the wild for years of her life and not once has been sexually assaulted.

It’s only when she reenters civilization that the threat of sexual assault becomes present.That means that rape isn’t a part of nature – it’s a part of human society. And even there, it’s less a part of human nature and more of a weapon. After all, Pinter is literally an alcoholic, and, so far, not once has he infringed on Angora’s boundaries during their quest. It’s only characters that are already cruel and want to find an excuse for their behavior that threaten rape. Clearly, men actually can control themselves if they want to! There is no deep animal instinct that leads men to rape. Men do it because they’ve been taught that women’s bodies are sexual property to be obtained.

READ: Here’s how the phrase “boys will be boys” promotes rape culture!

Certainly the men of THE MEEK think of women as property. The male workers see Angora platonically discussing with Pinter how to enter the capital and assume they have been having sex. These workers then harass Pinter for it, saying he is “stealing our women.” The implication here is that Angora isn’t a person; she’s a body that has one meaning and one purpose only. Later on, a religious couple that Angora and Pinter encounter on their quest scolds Pinter for Angora’s appearance, asking if this is “his doing.” And Pinter himself tends to act as though it is. He constantly begs her to wear more clothing, worrying that people will think she is doing this in relation to Pinter. He fears that Angora’s choices about her own appearance will affect how people might think of him. In this way, he acts as if Angora’s choices are his responsibility, not hers.

The implication in all of these instances is that Angora’s body is not her own. Instead, her body suddenly belongs to Pinter and can be bartered among other men. The second that Angora reentered society, she became sexual currency. 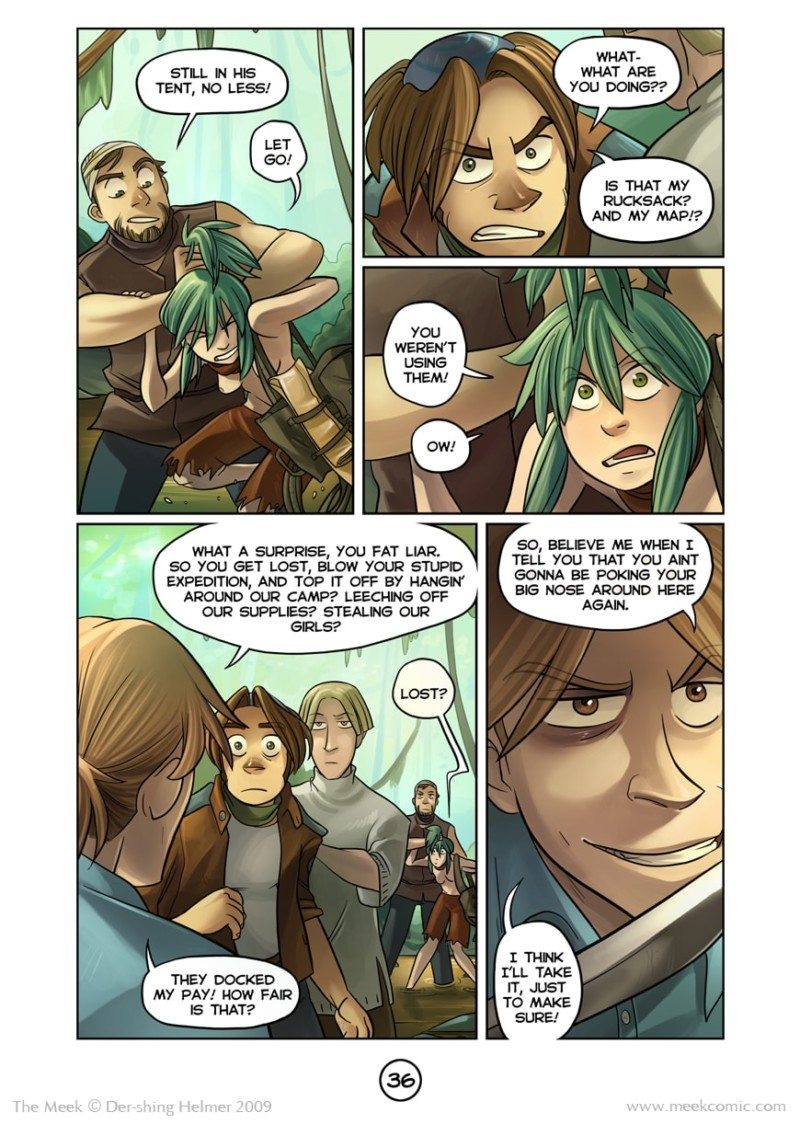 Let’s talk about sexual currency for a second. In patriarchal society, women’s bodies have values associated with them based on how “pure” they are. A pure woman, also called a good woman or a virgin, is one who does not act on sexual urges, who has no agency over her body, and only reveals herself to a good, deserving man after marriage. An impure woman, also called a bad woman, a slut, or a temptress, is one who acts on sexual urges, has agency over her body, and is “tainted” by awareness of sexuality. For this, society deems her as arrogant and needing to be punished.

Either way, women are objects with arbitrary values placed on them solely via appearance. In this model, there is no room to ask Angora how she defines herself and why she dresses the way she does. Her thoughts and words have no value.

Instead, other people’s interpretations of Angora’s clothing speak over her. Other characters believe that, by revealing herself, Angora is a bad girl who belongs to bad men. Any cruelty done to Angora is easily justifiable; she was “asking for it.” 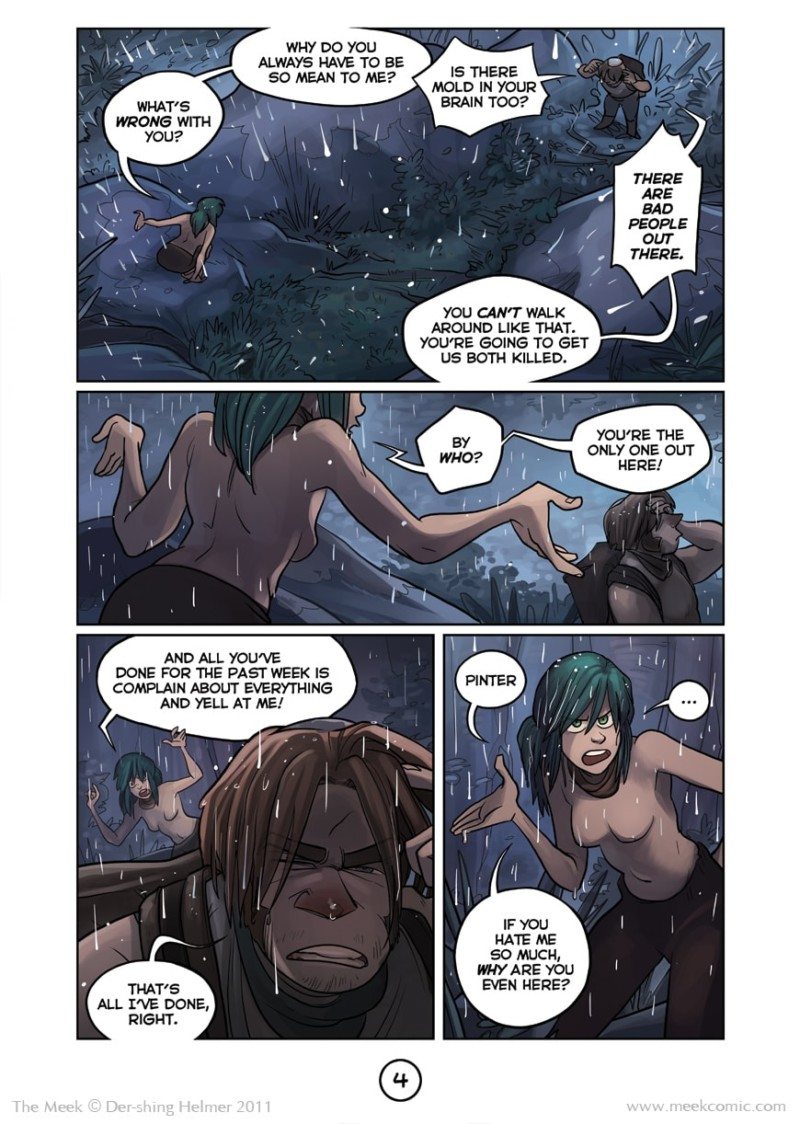 At one point in the comic, a religious woman violently kicks Angora away from a campsite, claiming that Angora’s healing powers are dark magic due to choosing a path of wickedness and debauchery. Angora tearfully protests, saying “Why are you all so obsessed with how I look? I’m a good person!”

Here, the main commentary is made clear. Angora believes in Goodness, the way it applies to men, who can wander around shirtless and still be kind, courageous, and heroic. However, society believes in the ideal of the Good Woman, which is a completely different concept. Being a Good or Bad Woman is entirely about your appearance and has nothing to do with your actions.

READ: Check out CV’s analysis of fanservice and the objectification of women in FAIRY TAIL!

In this way, Angora unintentionally sheds light on how arbitrary and fake society’s ideas about female sexuality are. As a character heavily associated with nature, Angora has a strong internal moral compass, and the supposed “morals” around female sexuality do not register on it at all. Furthermore, they just plain don’t apply to her character. Angora’s nudity is nonsexual. Heck, she might not even know what sex is in the first place.

If any of the characters making quick judgments about her appearance actually talked to her, maybe they’d realize that she’s not simply a Slut or Breasts or a Naked Body – she’s Angora, a hero who will save them all.