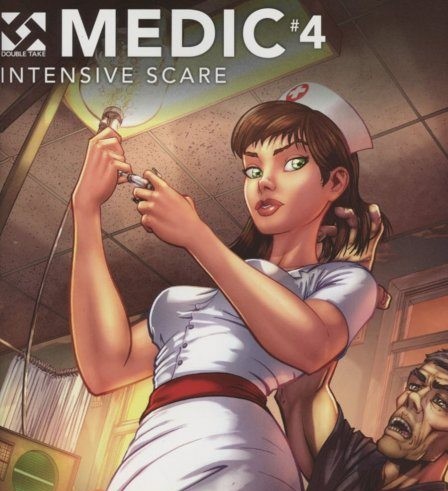 As has been documented on ComicsVerse in the past, Double Take uses a vastly different release structure than most other comics publishers. Instead of monthly issues, the company releases 10 issue “Genesis” packs every few months. The latest, GENESIS IV came out in May, appropriately featuring the fourth issue of each of their ten series. Today we’ll be looking at the fourth issue of MEDIC, the hospital-centric series written by Stan Chou, Michael Coast, Bill Jemas, and Brian Finkelstein with art from Chou and Andres Ponce.

The issue begins with a non-sequitur sequence that appears to take place outside the narrative. After this odd beginning, the issue goes through the usual Double Take intro giving quick visual identifications of the characters, then running through some 1960’s based health information. The story proper begins with the team of research scientists seen in previous issues removing their hazmat suits and contacting the government to share what they’ve learned of the virus they created that reanimates the dead. One of the scientists, Angela Kifo, discovers the secret of how the virus spreads.

Meanwhile, the hospital itself is overrun with injured residents of the surrounding Pennsylvania town who’ve been attacked by the “living dead.” Those who aren’t immediately put down by the government task force endure terrible pain as the understaffed medical professionals attempt to help as many patients as possible. Amidst the chaos, the team of scientists begin enacting a plan to close off the hospital to the outside world. 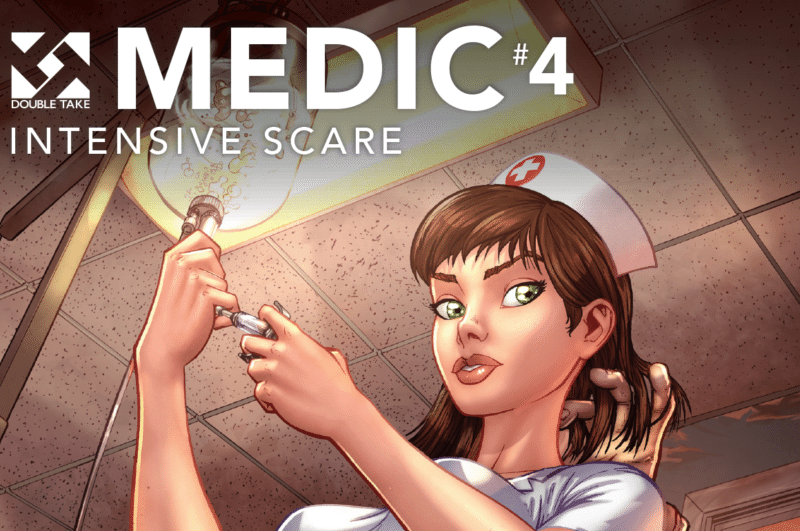 MEDIC #4 was one of the more interesting Double Take titles in this latest wave. The best comparison I can come up with is that it felt like I was surfing through cable channels and caught a small portion of a zombie movie that had already started. That’s not a bad thing, however, as the issue itself is a very entertaining read. There’s a pervading sense of dread throughout. It builds as the scientists slowly figure out how the virus spreads, then crescendos when all hell breaks loose at the hospital. As infected patients are killed, and those seemingly uninflected are left to suffer, readers can feel just how desperate the doctors on the front line are becoming. 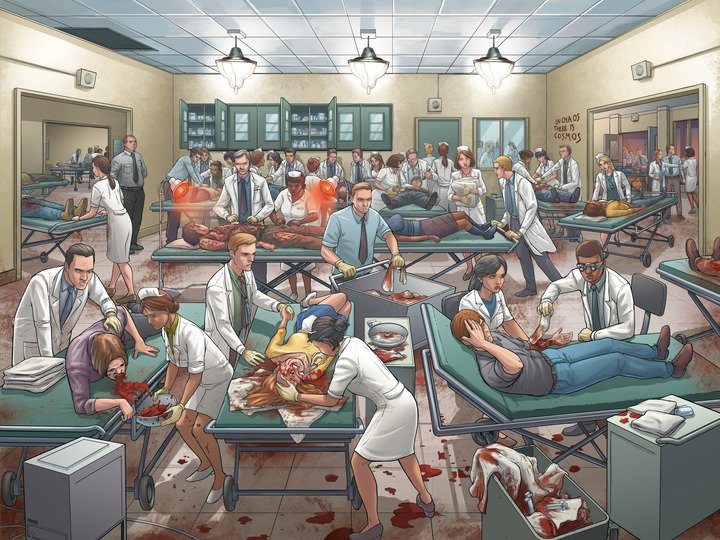 The art from Stan Chou and Andres Ponce, with colors from Marta Martinez, is a strong point in MEDIC #4. The characters are well-defined with well-proportioned body types that are a welcome change from the comic book norm. The panel work is cinematic in nature, with several of the transitions reminding me of the kind of quick cuts often seen in zombie/horror films. The highlight sequence for me was the hospital scene late in the issue. Chou and Ponce capture the frantic nature of the moment and  injuries to the victims without turning the sequence into a grotesque gore-fest.

MEDIC #4 is well-paced comic that I would definitely recommend fans of Double Take or the zombie genre check out. While the characterization leaves a great deal to be desired, the engrossing plot and nice artwork overcomes that for the most part.