“What if reality (as perceived) were simply an extension of the self? Wouldn’t that color the way each individual experiences the world?…”

ASTERIOS POLYP by David Mazzucchelli is an emotionally deep yet visually fun comic. It tells the story of Asterios, a middle-aged man living in regret. He and his wife are divorced, none of the buildings he planned as an architect were ever built, and, to top it all off, he loses his home in a fire. The story itself explores different ways of perception. By incorporating Greek mythology and art history, Mazzucchelli is constantly influencing how you think and feel about Asterios’ situation. The most striking theme in ASTERIOS POLYP is how Mazzucchelli uses elements of art to play with the reader’s viewpoint. Mazzucchelli uses line, color, and form to influence readers’ opinions of each character.

“…That might explain why some people seem to get along so effortlessly, while others don’t…”

To describe Asterios and his wife, Hana, Mazzucchelli uses different types of lines to represent each character. Asterios is an architect — he is particular about how things are to be done. This is seen in the story through his role as a teacher. He is detached when addressing his students. As a person, he is level-headed, unemotional, and straightforward with his opinion. When Asterios is with Hana, Mazzucchelli draws Asterios with clean blue lines. Each line has a purpose, there is very little detail, but everything is very direct, just like Asterios.

READ: Interested in comic art? Check out Art and Such with Shitty Watercolours!

In contrast, the style used for Hana is more impressionistic. Hana’s profession consists of taking things most people see as garbage and creating sculptures with them. The linework used to draw her character contains more detail, but your eye is distracted within the image. The lines are racing from side to side, forcing the viewer to pan the image quickly and frequently. Her lines contain emotion and movement by forcing the viewer to frantically move around the image. By drawing Hana impressionistically, Mazzucchelli enforces the notion that Hana focuses more on detail compared to Asterios’ big-picture point of view.

When Asterios and Hana get along, the sketchy lines that make up their world come together to become a whole picture. Mazzucchelli uses these lines to show how clear the world becomes when they aren’t fighting. The couple have very different ways of perceiving the world. Only when they can see things from their partner’s perspective does the world become clear and concise. However, this also indicates how each person perceives the world around them: where Hanna sees possibility and details, Asterios only sees the big picture.

“…Yet, despite such predisposition, maybe one person’s construction of the world could influence someone else’s…”

Color is a significant element in ASTERIOS POLYP. Mazzucchelli uses color to create unification between characters. When in their minds, Asterios perceives the world in blue, while Hana sees the world in red. When cooperating, however, the pair has a clear picture of the world in a shade of dark purple. The use of the dark purple shows the couple are viewing the world as one.

Together, their world contains every detail you would expect from a comic. The panels are more concise, shading is present and, most obvious, the page is more colorful. Objects in each panel are more identifiable. However, when Asterios and Hana get into a fight later in the story and Hana begins to get upset, her red scribbles slowly separate from Asterios’s clean outlines. As Hana starts to overpower him in their argument, the red engulfs the room, leaving Asterios the only blue figure. Yet, towards the end of the fight, Hana gives up. The room is all blue, with her the only character that appears in red. 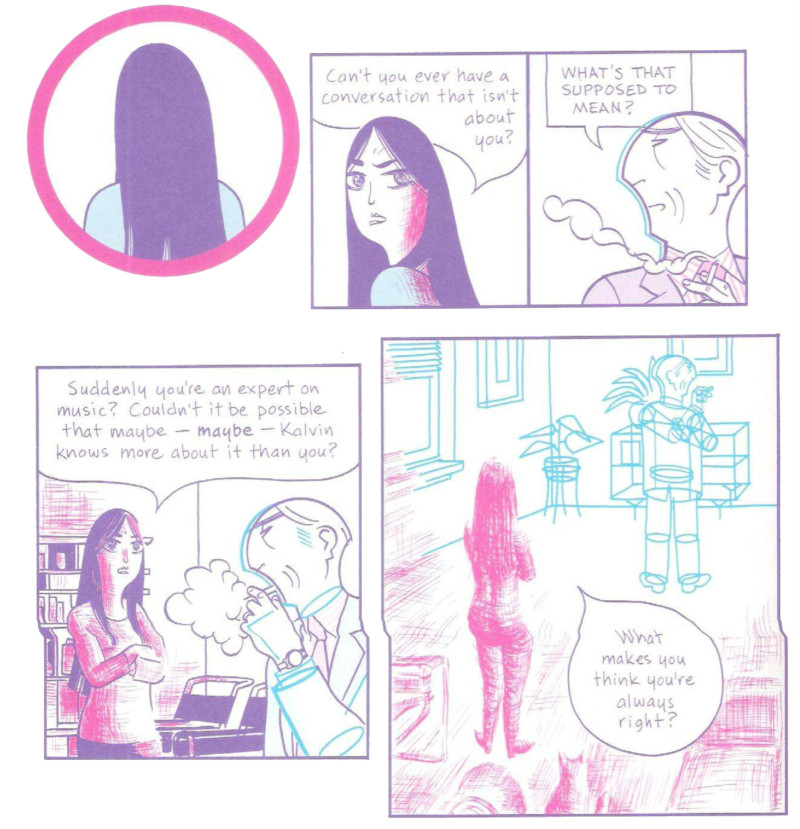 Mazzucchelli uses color to show how each character interacts with another and their larger world. When they get along, Hana and Asterios have a complete picture in purple. But, when one character cannot see the other person’s perspective, the purple disappears. The character’s color becomes dominating. The shade of colors that Mazzucchelli uses also strongly speaks to the characters’ personalities. Asterios’s blue is cool and relaxed while Hana’s red is energetic and bold. When combined, the shade of purple Mazzucchelli uses is cool yet bold. It combines elements of each character, which is indicated by their colors.

“…You would have to imagine that these constructions, whatever their origins, are not immutable…”

It’s also important to note that black is nowhere in the comic. Mazzucchelli avoids black, going only as dark as purple. Mazzucchelli chooses each color carefully. The dark purple gives ASTERIOS POLYP a softer feel but the book makes stand out artistically from other texts. Black within this text would have been too overpowering. Black would have created an imbalance within each frame. Without black, the text has a softer tone to it. To be able to create a visually exciting comic without the use of black is no easy task. However, Mazzucchelli makes it look easy.

READ: For a completely different art style, check out SANDMAN: A GAME OF YOU – A Hero(ine)’s Journey! 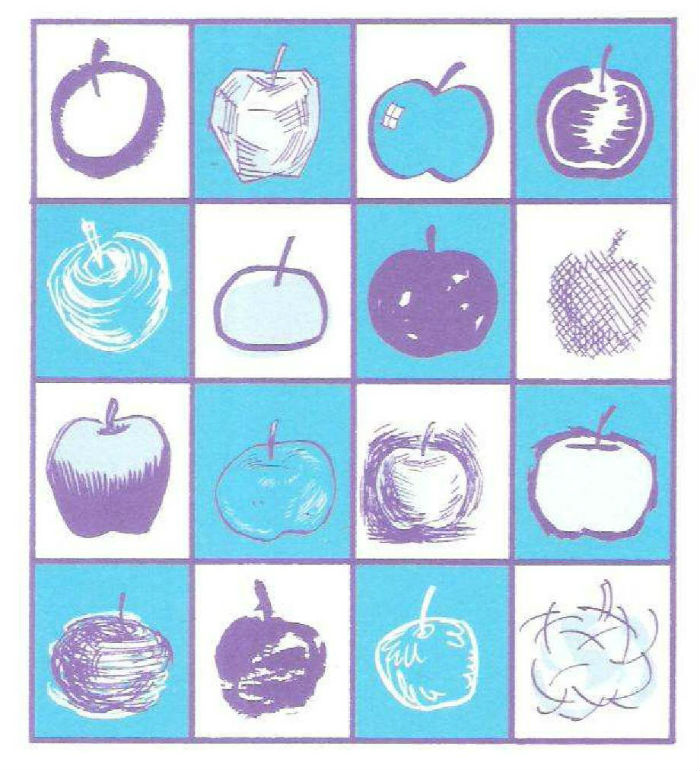 On the other hand, white is one of the dominant visuals of the text. Mazzucchelli uses space to his advantage. Since Asterios is an architect, Mazzucchelli uses each bit of space on the page to further his narrative. It provides moments of emptiness but also gives readers a glimpse into the next chapter.

Each chapter (if that’s what we can call them) begins with not a title but rather an image. For example, the beginning of one chapter contains a series of apple drawings placed into a vast, empty page. The first line on the following page is “What if reality (as perceived) were simply an extension of the self?” This is fitting for an architect because it brings consistency to the book. Asterios is a man that is in constant need of a purpose: no lines are drawn without a reason. The function of the white space is to make sure the reader’s eyes are focus on one, very important image.

Form is also a dominant element in the comic. The whole book is based on the idea of perception. Therefore, each character’s form exemplifies a personality trait of that character. Hana’s world is seen through a two-dimensional perspective. Her perceptions are flat but more detailed than Asterios’s. Asterios, by contrast, sees little detail, but his world is in three dimensions. He has a more rounded worldview than Hana, creating a space for her abstract detail to fit into and fill in.

READ: Looking for comics with a different art style? Check out Kickstarter Comics That Need Your Support: An Eclectic Trio!

The complete picture in ASTERIOS POLYP reinforces the idea that the two should be together. One influences the other to see the world more fully. Their perceptions are limited, but when the two are together, their world becomes deeper. The pair have communication issues, but it’s only because they see the world differently. 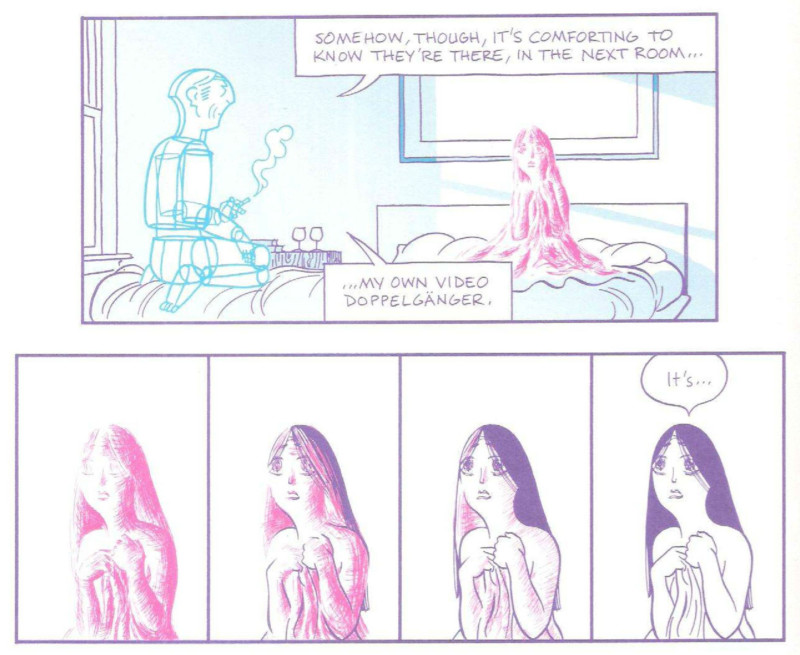 Mazzucchelli uses ASTERIOS POLYP to explore how people’s perceptions of the world can influence others. With line, color, and form, Mazzucchelli creates a narrative art that is head and shoulders above the competition. Through carefully chosen elements, Mazzucchelli influences how the reader sees and thinks of each character. He uses these elements to explain why some people seem to get along effortlessly while others struggle. His art is impeccable, pulling from different styles and movements to create a comic that gives the reader something new every time. David Mazzucchelli’s ASTERIOS POLYP is a must-read for artists, readers, and comic book lovers alike.

“…Wouldn’t that be nice?” -Ignazio Polyp