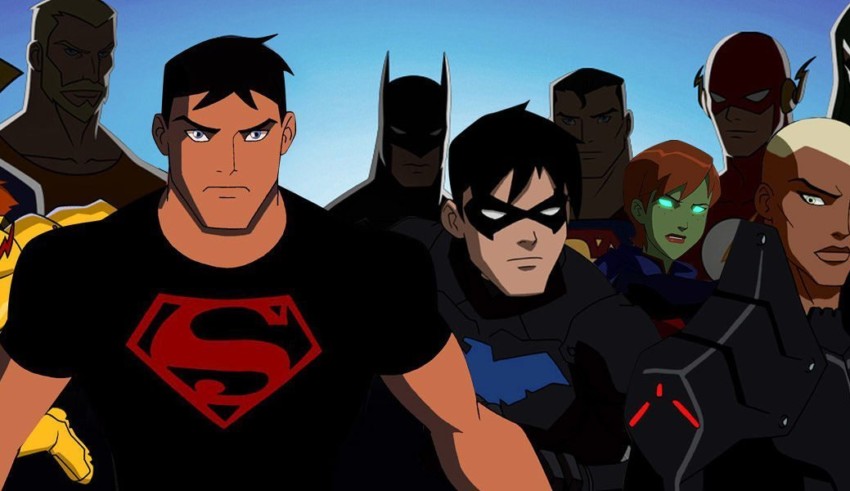 With a lot of modern-day animated shows, there are clear divides between children and adult programming. They are either geared towards younger children (UNCLE GRANDPA or CLARENCE), or meant for adults only (RICK AND MORTY or THE VENTURE BROS). However, amidst the one-tone shows, there are cartoons that strike a wonderful balance and cater to both age ranges. Through themes or character actions, these shows tread the line between staying child-friendly and approaching adult concepts. By doing this, they can explore content you wouldn’t normally see in a show for children. Since they are not catering to children exclusively, by assuming they can only handle crazy random humor, these shows expand upon their initial potential and become interesting shows that viewers of any age can enjoy.

One prime example of this thematic balance is the recently cancelled cartoon YOUNG JUSTICE, which followed a team of DC superhero sidekicks. In a lot of ways, YOUNG JUSTICE was a standard kids action show—packed with humorous antics, school dances, and dog sidekicks. The series was definitely geared towards children, but it also contained a lot of mature ideas and dark concepts. It found a balance between being as silly as SCOOBY-DOO, but not as grave as CW’s ARROW. YOUNG JUSTICE knew when to be goofy and fun, and when it could get more serious in nature.

For instance, in the episode “Failsafe,” the team takes up the helm of Earth’s primary defenders as all the members of the Justice League are killed. Within the short span of 22 minutes, every member of the teenage team is killed fighting alien invaders, the episode ending with Miss Martian’s supposed death at the hands of Martian Manhunter. As it turns out, the entire scenario is a psychic simulation, created by Manhunter, but taken to extremes by Miss Martian. Once she witnesses the death of her Young Justice teammate, Artemis, Miss Martian’s emotions rise and overpower Martian’s control. This leads to the simulation feeling incredibly real, and is why all the others nearly died.

Not only did the adult heroes thrust them into a situation designed for them to fail, but Miss Martian’s fear and sadness nearly sent the whole team into permanent comas. It was a massive shake-up moment for the team, and the next episode had each member going to a therapy session with Black Canary to recover from it. Think about that—a bunch of teenage superheroes, spending a whole episode in therapy. You might see that in an adult sitcom, but almost never in a superhero cartoon. For a show about kid superheroes, YOUNG JUSTICE was not afraid to tackle the grim realities of death—yet never lost its grasp of the child-friendly genre.

READ: Like the sound of YOUNG JUSTICE? Here are five great reasons the show’s worth a watch!

In many ways, YOUNG JUSTICE was as willing to embrace the darker elements of crime-fighting that many comic books do. Being willing to tackle these more grounded, gritty issues garnered YOUNG JUSTICE a larger, adult audience. Not because gritty is better, but because it didn’t have to dumb itself down. The series let their teenage protagonists develop in ways that parallel the way real people develop, giving the show a much more realistic and mature feel. Letting an inherently child-based show go to more grown-up places makes more interesting television for both ends of the age spectrum. It says a lot that you can have an episode which contains multiple therapy sessions and Superboy & his pet dog fighting alongside goofy, tech-y Viking alien people, and, yet, still feel natural.

Comparing YOUNG JUSTICE to the more childish TEEN TITANS GO! provides a clear contrast between animated shows that successfully add maturity, and those that don’t really try to. Many people were unhappy with the revamped TEEN TITANS programming, as it was lighter in tone than the original cartoon. Rather than try and incorporate darker elements, TEEN TITANS GO! is content to be a light-hearted romp of humor and superheroics. It’s not a bad show, but it’s certainly not held in as high esteem as the original. Staying true to what a “children’s show” is isn’t bad, but it turns away older viewers. TEEN TITANS GO! effectively shuts out those who are searching for a show more akin to the cartoons they loved as a kid. This avoidance of maturity makes the show more accessible to children, but it loses an element of nostalgia.

Unlike TEEN TITANS GO, THE LEGEND OF KORRA fed off the nostalgia from its parent show AVATAR beautifully. KORRA worked because it was never afraid of putting more serious content in its storytelling. In the third season, Korra has to fight for her life against Zaheer, almost dying twice. The fourth season then picks up a few years later, where her brush with death is sen to have majorly messed with her psyche, making her angrier and more volatile. She effectively can’t be the hero she needs to be, hence why she leaves the Avatar lifestyle behind. Korra grappling with such a morbid reality is something you’d only expect in adult shows. Yet, the show also never looses the humor or light-hearted feel it started out with. Much like YOUNG JUSTICE, THE LEGEND OF KORRA found a way to work adult themes into a child-friendly story.

That idea is what makes maturity work for some cartoons, but not for others. Maturity in cartoons works when it doesn’t shut adults out from shows they enjoyed as kids. Not every kids show needs adult approval, but it’s wonderful to see a cartoon enthrall an older audience. Nickelodeon’s LEGEND OF KORRA works because it creates a great kids cartoon and gives older fans a dose of nostalgia. YOUNG JUSTICE avoided the overly childish tone of TEEN TITANS GO, while never going as adult as ARROW. You can either get a taste of the more mature-leaning program, or you can fully embrace childlike, good-natured fun. When cartoons strike this balance, they broaden their narrative horizons.