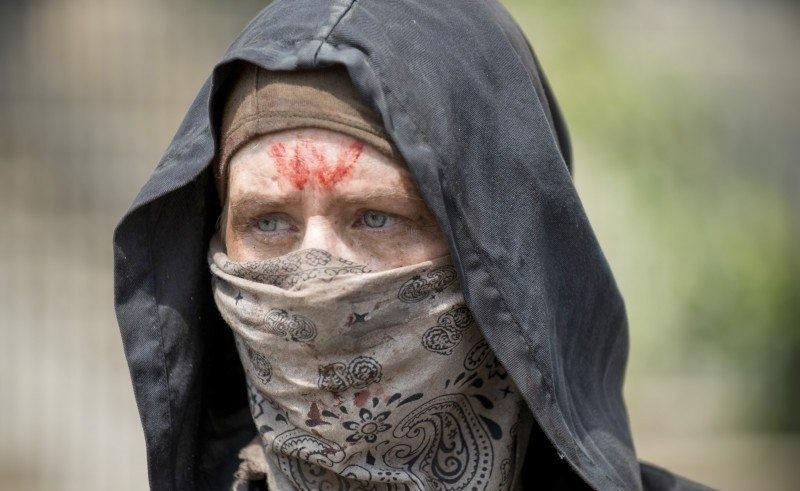 I don’t usually do this, but due to fantastic directing, top-notch writing and worthy suspense, horror and action to boot, I’m just saying it right now – this week’s episode, aptly titled “JSS – Just Survive Somehow” – was a 5/5 in my book. “JSS” cranked up the chaos and fully committed, all the way through. It was a great hour of television.

We’ve certainly come a LONG way from Season Two, which I lovingly refer to as “The Talking on a Farm”.

We left last week’s episode on a major cliffhanger; Who the flying ZOMBIE BOOBS was honking that damn horn!? With the majority of Team Grimes shepherding thousands of walkers away from Alexandria, a not-so-far off car horn sounded, effectively ruining their risky (albeit absolutely necessary) diversionary tactic.

As always, turns out it was just some dead guy!

That dead guy, of course, resulted from the Alexandrians fighting back against an ambush beset by The Wolves, who are at long last starting to show off their true colors. The attack kicked off with one of my favorite directing moves of the series to date: Carol is quietly baking a casserole, and watches out her window at her Alexandrian neighbor; it seemed as though this would just be another quiet episode of character development while Rick and his crew handle 10,000 walkers not so far off when WHAMMO! Carol’s neighbor gets destroyed by a man wielding a machete.

The Wolves are officially here… and in a very sad reveal, it turns out this attack may have actually been Aaron’s fault (as you may remember, Aaron left his backpack behind while he and Daryl were trapped by the Wolves last season. Aaron’s backpack contained photos and information on Alexandria). He didn’t deserve that reveal – but alas, this is the world we live in.

LISTEN: You know you love a good post-Apocalypse! Check out our podcast on Kelly Sue DeConnick’s BITCH PLANET!

This week’s episode was interesting in so many ways. For instance – there is no longer any question as to how legitimately under-prepared the Alexandrians have remained up until this point. Rick Grimes, even with his crazy cranked all the way to “11”, continues to be right. This safe-haven is one big, fat, sitting duck! While the bodies piled up under the weight of the Wolves’ siege – it was Morgan and Carol who did most of the heavy lifting – even with Deanna bailing in the 11th hour (and with the death of both her son and husband in recent past, I guess we can’t blame her).

One of my favorite elements of this episode was actually just that – The “B-Team” was left in the spotlight to handle an immense threat. Rick, Michonne, Daryl – I would consider them A-Team players – the Alphas of Team Grimes. But they’re currently preoccupied. This left many of what some might consider the “B” characters on their own to handle the onslaught of Wolves attackers, and so, as an audience, we really got to see how they handle themselves without Rick’s direct leadership. It turns out, they’re all leaders in their own right.

On another level, the Wolves are clearly a formidable threat, and yet we STILL don’t truly comprehend the magnitude of their forces. They were able to get in undetected, and kick up some SERIOUS s***, with not that many people. If it wasn’t for Carol being The Master of Disguise and cleverly donning a Wolves’ disguise, or Morgan shredding up Wolves with his bo staff, I fear the Wolves could have EASILY overthrown Alexandria. I mean, Carol even made time for a mercy killing or two during the siege for f***’s sake! She’s just THAT good at slithering through the chaos.

There were several intriguing character threads planted throughout this episode; Denise, the town’s newly appointed doctor, who despite being in over her head managed to find the courage to fight to save someone’s life during the attack, even though success at doing so was a moot point. Carl, being left on his own to protect his baby sister and bond with Enid – whose tragic and horrifying origin story was revealed (TL;DR – Poor girl witnessed her parents being eaten alive, and was forced to live on the road eating raw turtles before discovering Alexandria).

But none of the character vignettes were worth more investment than the sequences that highlighted the warring ideologies of Morgan and Carol. Just like one of the final shots of the episode, Morgan and Carol start out at opposite ends of the street, but in certain ways replace one another by the end of their walk through “JSS”.

Carol starts off as her undercover-Stepford-Wife-self, and as soon as the Wolves’ attack begins, she flips the switch to Rock And Roll. She’s popping on disguises, she’s mercy killing, she’s saving asses, and she’s not afraid to do it. The Wolves’ attack was fast and ruthlessly set in motion. We found Carol ending Wolves without a moment’s hesitation – a characteristic that, though brutal, has become seemingly integral to surviving the world of THE WALKING DEAD.

Morgan on the other hand, wants to do things as morally clean as possible – he won’t kill unless he absolutely needs to. For instance, we witnessed him dispatching a gang of Wolves without killing a single one of them, only to later be forced to kill a member of the Wolves he actually let survive in a previous episode. Sick irony at it’s finest. This is minutes after he spoke with Carol and reminded her that she doesn’t need to kill people, reminding her that “she doesn’t like it.”

The episode concludes with Morgan and Carol crossing paths on Main Street Alexandria and going their separate ways. Carol distraught, having broken into tears for the first time in a LONG time, after killing several Wolves without blinking. And Morgan, surely questioning whether or not he should be so merciful anymore. It’s an interesting dynamic watching two strong characters question their own headlining philosophies.

In the end, I’ll reiterate, this was a tense and committed hour of television. The character arcs were well written, the action and violence top-notch, and the emotional weight of seeing even just a few of our characters acting on and questioning their own codes was enough to carry us through. And as a HUGE bonus, we totally got one of Carol’s Famous Casseroles at the end!

Whether it’s seeing 10,000 walkers turn into a non-issue, or finding an end to the elusive and dangerous Wolves, we’re only two episodes in, and it’s already plain to see that we’ll have a lot to root for this season.