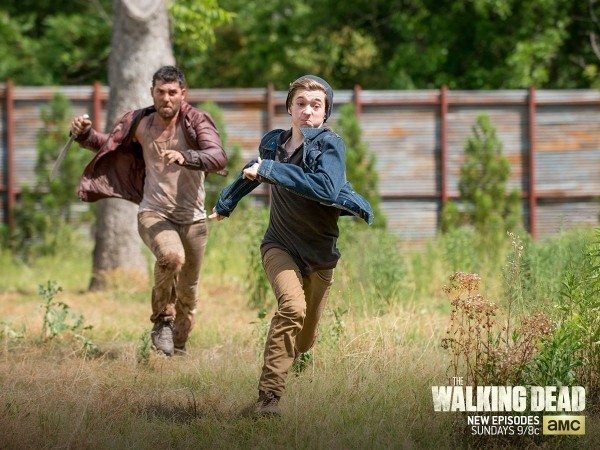 WARNING – SPOILERS AHEAD. Big ones… too…

Nothing has been more prevalent this season of The Walking Dead than the following message; The world is judge, jury and executioner in the zombie apocalypse. It will claim anyone it wants, and can – at any time.

From the quarry walkers spilling out to what we’ve witnessed in last night’s episode – titled “Thank You”… no one is safe, despite any loving connections you may have made to any one character.

READ: Our review of this season’s premiere!

Anyone who has stuck with me, and read my reviews to this point, knows that I can be a bit of an ass-clown. I like to have fun. I like to dilute the palpable tension and tragedies that this show brandishes with jokes… because, I fear, if I didn’t, we’d all be focusing too much on what makes this show difficult, at times, to watch – from an emotional standpoint. There really is so, so much to admire with this abjectly morbid show.

But … I have to admit – with this review, I can’t do it. I can’t just be funny about this episode… This was yet another tense and committed hour of television, and this season has a foundation built on big, bold, swings. We’re now THREE episodes in and we’ve seen more walkers, and possibly more heartbreak, than we’ve seen in any previous episode – marked by a major, MAJOR character death. 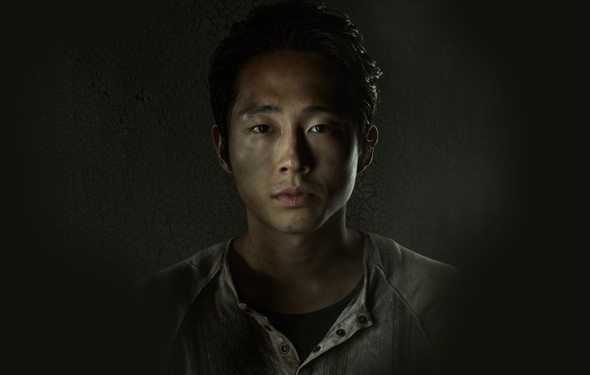 They pulled a similar stunt a few seasons back when, about three or four episodes in, they killed Laurie. Point blank, the show doesn’t pull any punches… it will kill your darlings.

So… we’re seeing this massive Hail Mary of a plan to save Alexandria from an army of the undead fall completely apart. We’re seeing Carol and Morgan question their own motives entirely. We’re seeing Rick get trapped by an insurmountable number of walkers inside of a shitty R.V…. needless to say, this past few episodes – though enjoyable – have been very tense… nearly to a fault. The edge of my seat is starting to dig into my ass, for Pete’s sake. The episode ended with Rick literally trapped in a Winnebago as about a million walkers descended on him, this – just MOMENTS after he also thwarted a sneak attack by the Wolves.

The main reason, however, tonight’s episode was so taxing is because Glenn has died. Or so it seems… As a viewer of the television show, I’m very angry. Glenn… seemingly didn’t die the death he deserved.

READ: Our review of THE WALKING DEAD comic!

As well – the show’s producers (and even just the way his ‘death’ was filmed) are being very cloak and dagger about the whole affair. I only SAY Glenn is dead… because that is CERTAINLY the way they made it seem. However, if this is some sort of long con, where we’re lead to believe that Glenn is dead when he isn’t… I’ll have to admit, I’ll be glad to have him back – but I would find that to be a cheap move.

To backtrack just a little – tonight’s episode picks up after the horn sounds off at the end of the first episode of the season. Whereas episode two picked up back at Alexandria – episode three continues Rick & Companies’ story on the road – trying to divert the swarm of walkers. 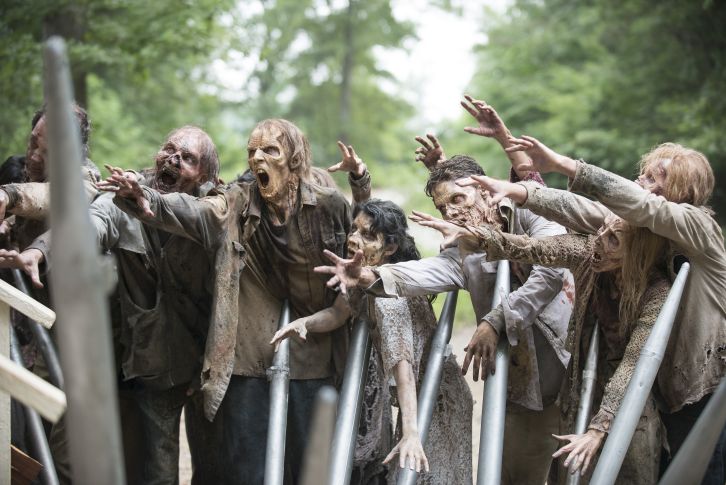 As the group gets separated while attempting to pick up the pieces of their catastrophic plan… the stakes go from high to HOLY SHIT. Rick goes off on his own to head off the diverted herd of walkers, and to post up while Michonne and several others – including Glenn – fight their way to his location. Meanwhile, Michonne and company end up totally blocked inside a store – forced to wait out a passing mob of walkers. Sadly, before long their cover is blown… that’s when things really heat up. The group attempts an escape – several nameless Alexandrians get wiped out (about damn time) and we find Michonne stuck in an alley with Heath – and Glenn stuck in an alley with Nick. There’s seemingly no escape for either of our heroes… luckily, Michonne makes it out of her tight corner.

Glenn however, is a different story…

The last thing Glenn sees before he collapses into a mob of about 100 walkers is Nick blowing his brains out while standing on top of a dumpster. Not a glorious demise for one of the show’s best characters. Absolutely brutal.

Nick, as you may remember, is a character that only just recently tried to kill Glenn. Glenn, as he was prone to do,  gave him another shot, however… he gave Nick a chance to become a character so much more important, so much bigger, than when we first met him. Because that is who Glenn was (is?).

In any case… Nick kills himself, and Glenn gets wrapped up in his collapsing body, falling into a veritable swimming pool of walkers. Again, this was filmed in a very specific way – we don’t KNOW if Glenn is dead… were those his guts being poured all over the pavement by ravenous walkers – or were those Nick’s, whose body is now lying on top of Glenn? We just don’t know… And the mystery of it all is as intriguing as it is frustrating. 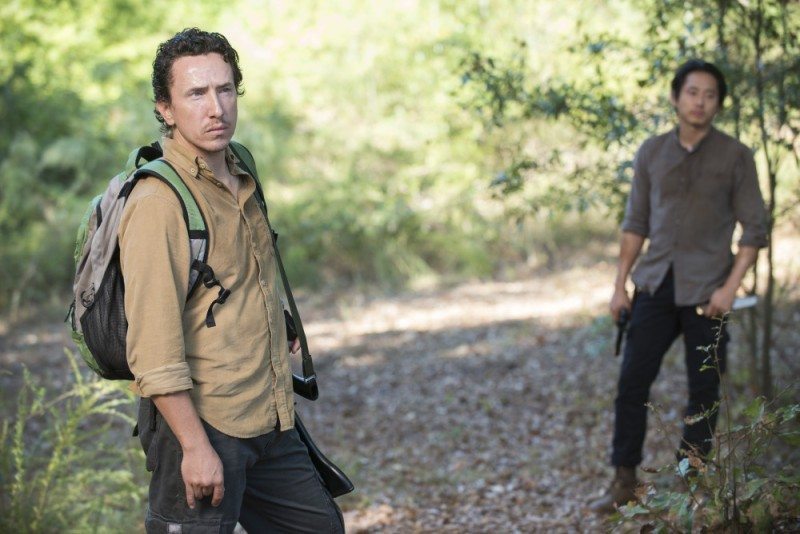 More to the point – readers of the comic will remember in precise detail the iconic way in which Glenn met his demise… Glenn is actually one of the first, if not THE first, major casualties we witness at the hands of Negan. Negan killing Glenn, with his signature bat Lucille, literally solidifies Negan as one of The Walking Dead’s all-time biggest baddies in one foul swoop. Pardon the French but it’s a fucking SHOCKING moment.

But now, if Glenn is going out like this – I feel as though we’ve been ripped off, a little… We missed out on seeing this insanely iconic moment actualized on screen.

READ: Check out the IF ANTHOLOGY – when science-fiction comes to comics…

To give this episode anything less than a 4.5 would be criminal. The acting was incredible, the gore – as always – superb. The tension was electrifying. But, again, I can’t help but shake the feeling that we’re either being set up for a cheap parlor trick – or that a major character met his demise in a way that could have been handled a bit better. The world is cruel and swift in The Walking Dead… but that doesn’t mean our heroes don’t deserve a just ending. Maybe… that’s the point. But damnit, Glenn is better than this! *stomps feet like a 5 year old.

The world this show lives in is cruel… that’s for damn sure. I can only imagine what will happen next week…

– God, what the hell is Maggie going to do… in the comic, she’s devastated. And rightfully so…

– Rick looked so panicked tonight, while that R.V. wouldn’t start up – over a chorus of walkers moving in… phenomenal acting by Lincoln.

– Heath being judgmental of the crew, and then Michonne putting him in his place. So badass.