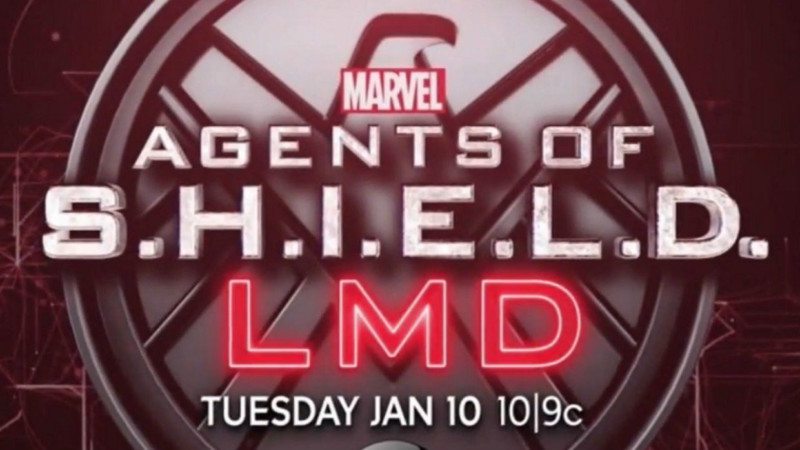 With the latest episode of MARVEL’S AGENTS OF S.H.I.E.L.D. comes the conclusion of the first half of the season, which heavily focused on Robbie Reyes as the Ghost Rider. But the show keeps the momentum going as soon as Robbie’s arc ends by immediately transitioning into the newest theme, L.M.D.’s, or Life Model Decoys.

The Ghost Rider storyline seemed to end rather abruptly after a standoff between Eli Morrow and his nephew Robbie Reyes the Ghost Rider. Robbie struggled to break free from Eli in a containment field which was also a nuclear reactor. Eli’s powers were revealed more, in that he can control elements from the periodic table. In any event, Robbie took Eli with him presumably to hell or another dimension to save everyone in the vicinity of LA. As was mentioned above, it seemed rather abrupt for Robbie to get rid of Eli so quickly without a true resolution. After all the buildup, it doesn’t make much sense for it to end just like that in an instant. Therefore, it makes sense to have Robbie reappear in the second half of the season (maybe as an L.M.D. Yeah, right, like Aida could grab a Ghost Rider). Perhaps he can be of assistance in determining who is an L.M.D. and who isn’t. Hopefully, it isn’t done in a tasteless Deus ex Machina sort of way as that would ruin the kind of writing this show is known for. Either way, they may be saving him for the second half of the show, or he could reappear in a show of his own featuring other Ghost Riders.

With that in mind, Coulson actually makes interesting marks regarding Ghost Riders (that’s right, it’s in the plural). Coulson says two things. The first being when Daisy asks him if Robbie will make it back. His response? “The last Ghost Rider did.” He then goes on to say “I don’t think we’ve seen the last of Mr. Reyes”. It makes sense that he would know since Robbie told his origin story while in the containment box on the aircraft, and it’s likely Daisy told him what happened to Robbie then. Or Coulson could have done his own research and found out about Ghost Riders on his own after coming into contact with the Darkhold. Either way, Coulson knows, and hopefully that knowledge comes in handy down the line sometime soon (in fact Daisy leaves a chain in Robbie’s car, so foreshadowing? Most likely).

Click: For more MCU goodness, check out this GUARDIANS OF THE GALAXY VOLUME 2 reaction post to the 1st trailer!

Lastly, Aida is seen to have become a troublemaker after all. After last week’s episode where she is seen examining a model of a brain, we can confirm her Ultron-esque intentions. After reading the Darkhold, we can assume it tempted her with knowledge and somehow corrupted her, effectively making her evil. This in turn, has caused her to replace agent May with an L.M.D. for who knows why. Online people have been arguing that her sense of protecting others is in play here and has been warped and that she actually still wants to protect others. However, if this were true she would not have snapped Agent Nathenson’s neck while he was gathering things from Dr. Radcliffe’s lab in order to do his android testing under S.H.I.E.L.D. Therefore, Aida has clearly become an enemy and is operating under some new evil directive. It’s doubtful that Radcliffe was involved in this, although he did seem shady when Director Mace was talking to him about the android project. We will need to wait and see how this one pans out, as it could go anywhere (fingers crossed for a Grant Ward robot that can terrorize some more).

Other important events that happened within the episode involve minor things. Director Mace dons his sleek new outfit for the field, reminiscent of his comic book character, the Patriot. Hopefully, this means we get to see Mace in action more with the team instead of behind a desk with PR worrying about his hair. Mace also makes Daisy Johnson or Quake an agent once more. This is important because Daisy was hesitant to join back after what happened to Lincoln in the last season, although she seems fine to join back up (how shocking. Get it?). It’s oddly suspicious and probably has to do with Quake missing her “family of friends” who she has known for way longer than Lincoln. Mace has also accepted the possible consequences involved with Senator Nadeer, who held blackmail about Daisy and Robbie working for S.H.I.E.L.D. over the director’s head. Knowing the Senator’s character, Mace and the agents will undoubtedly have hell to pay for crossing her with or without Robbie to soak up the flames. Also don’t forget that she still hates Inhumans and is still allied to the Watchdogs, the militant anti-Inhumans group.

All in all, this episode comes to stir the pot more instead of tying up loose ends. Although Robbie’s storyline is somewhat resolved, it does not feel like it’s over by a long shot. Additionally, with Aida’s evil intent now known completely, another plotline has surfaced just in time to give us more questions to scratch our heads about. Even if that’s so, at least there won’t be such a long break to wait for the second half of the season. MARVEL’S AGENTS OF S.H.I.E.L.D. will return January 10th with the arrival of the new mini plot of L.M.D.’s. so grab your android doubles, because things are going to get confusing.

CLICK: To know more about MCU films and their formulas!