This week, after much fanfare, a new trailer for GUARDIANS OF THE GALAXY, VOL. 2 was released. And just like I expected, it featured great action, humor, the promise of an awesome new movie, and the revelation that Star-Lord’s father… is Kurt Russell. 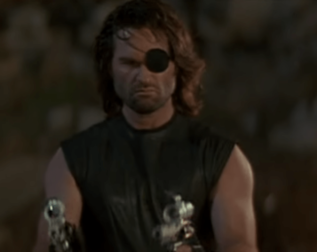 It’s amazing news, but it’s also another sign of Marvel placing a strong emphasis on youth in its films. Think back to early Marvel films like THOR and CAPTAIN AMERICA. Both films focused on actors that were relatively new to mainstream audiences (Chris Hemsworth and Chris Evans) in title roles. And in both films, the leading men were supported by at least one veteran actor. CAPTAIN AMERICA had Tommy Lee Jones as Colonel Phillips and Hugo Weaving as the Red Skull. These are both actors with decades of films and critical acclaim under their belts. Yet they both played smaller roles in a film to help create a recurring role for an up and coming actor. It’s not only a testament to both actors, but it shows Marvel’s commitment to younger talent when they have such established names attached only to a single film in a much bigger series.

READ: Interested in the best young super teams? Then check out our essential reading for TEEN TITANS!

THOR is no different; while it only had one major actor, it was a doozy — Sir Anthony Hopkins, arguably one of the finest actors in film history. Hopkins has been in acting for over fifty years, has won numerous awards, and has portrayed one of the greatest villains in the history of cinema. Yet, he accepted a role in THOR that could’ve easily been pitched as “you’re in the movie for fifteen minutes, and you’ll be asleep for six of them.” Hopkins not only accepted, but he is set to resume the role of Odin for a third time, in the series that helped launch the big name careers of both Chris Hemsworth and Tom Hiddleston. The list continues on from there — Michael Douglas in ANT-MAN, Glenn Close and John C. Reilly in GUARDIANS OF THE GALAXY, William Hurt in THE INCREDIBLE HULK and CAPTAIN AMERICA: CIVIL WAR, Tilda Swinton in DR. STRANGE, Jeff Bridges in IRON MAN, and Marissa Tomei in the upcoming SPIDER-MAN: HOMECOMING.

At the same time, Marvel could easily be criticized for their approach as well. The studio earned a reputation in its early days for being cheap, and a film like IRON MAN is a good argument for this. While Robert Downey Jr. is a huge star now, he was down and out at the time of the film, having dealt with drugs and a jail sentence. Marvel signed him to a four picture deal that would take him through the AVENGERS, likely knowing he had no major offers at the time. Downey was not a new star, but his signing set a precedent for Marvel signing star actors for less (or for long film contracts) while having big name actors in a supporting role. This would make Marvel’s youth focus seem more like a corporate strategy, save for one thing — that the youth focus also appears in their comics.

READ: What could GUARDIANS VOL. 2 be like? We speculate!

Marvel has dropped a large number of young heroes in the mix across its comic pages in the last few years. Most prominent is Kamala Khan, the Muslim-American teenager who took up the role of Ms. Marvel. But there are other young characters taking the mantle of established heroes. Miles Morales (Spider-Man), Amadeus Cho (Hulk), Sam Alexander (Nova), Riri Williams (Ironheart), and even Vision’s cybernetic daughter, Viv Vision, have risen up to continue the legacy of established heroes (in most cases, their predecessors even act as mentors). Many of these heroes have joined together in the super team Champions, attempting to find their own method for heroics apart from their predecessors.

There are also Marvel’s original young super teams, like Young Avengers and Runaways (who will soon be made into a series on Hulu), or the casting of less established actors to lead Marvel’s Netflix series. Meanwhile, Marvel’s rival DC, which has a longer track record of legacy superheroes, has spent more time trying to retool their classic heroes for a younger audience (see NEW 52, where the Justice League is dressed in new ‘cool’ outfits) or focusing on more established actors in their films (Ryan Reynolds as Green Lantern, Josh Brolin as Jonah Hex, Ben Affleck as Batman) to mixed results. Marvel has shown more strategy by focusing on younger actors and characters, while being sure to utilize more established names to both legitimize their product and give older fans something to enjoy.

So with their well-thought agenda, Marvel has found a formula that may have some corporate strategy to it, but ultimately is able to utilize one generation to prepare the next across two mediums. It’s an impressive feat and one that will keep fans guessing well into the future as to who will be ‘snared’ next.  Personally, I’m waiting for Meryl Streep.

Then again, who isn’t?