Yes, Marvel Fans, your day in the sun has finally arrived. One month ago the sequel to the next-gen release title mega hit Marvel Ultimate Alliance arrived on store shelves. Marvel fans everywhere flocked to their local gaming establishment to dive into their favorite characters universe. It has been nearly four years now and it is now safe to say that there are certainly high expectations to be met. Marvel Ultimate Alliance 2 meets all of their predecessors accomplishments and keeps the gaming experience exciting throughout.

The first thing you need to know is that this game is very similar to the first Ultimate Alliance. The basic designs of both games are structurally and fundamentally alike; you will select from a wide roster of your favorite Marvel Super-heroes and villains and fight your way through Marvel Comics style story meanwhile upgrading your characters powers, and intangible boosts. This keeps true in the sequel as the action is very fast paced and enjoyable. The character modelâ€™s and cut scene graphics have been improved from the first installment and the voiceover work is solid. If you have not played the first Ultimate Alliance you can be in store for an arcade style dungeon crawler title that takes the better elements of both effectively combining them for a solid experience for young and old.

As I am sure you are aware from all of the commercials plugging this game, the most obvious improvement to the franchise is its story. Players will be taking part in a re-imagining of two Marvel Comics story-arcs, the Secret War and the Civil War. These allow the user to feel like they are right there with the characters they know and love fully immersed in the Marvel universe. As you first boot up the game you will find yourself in the Secret War Arc along with Nick Fury and four of Marvelâ€™s MVPs. Basically you will be invading Latveria on a “National Securityâ€ style mission where you must sneak in and stop weapons trafficking. The issue soon comes up if Fury was sanctioned to take military action against another country and goes underground for most of the game. Now the heroes are left to contemplate whether or not they have done the right thing by fallowing Fury without question. After a debacle by one superhero, a bomb is set off from within a residential area and the casualty count mounts to six hundred. Just as in the story arc from the comic books the government soon pushes for a bill of Registration. This Bill will demand that super-heroes become deputized with the government informing them of their real identities and any super-human powers they may posses. Just as their comic book counterparts do, Captain America and Iron-man disagree on the issue. This prompts a split between the super-hero community that the player is caught up in, and they must choose whose side they are on. This gives you the option of running through the game at least twice once choosing to register and fighting with the old shell head, and once with Cap. 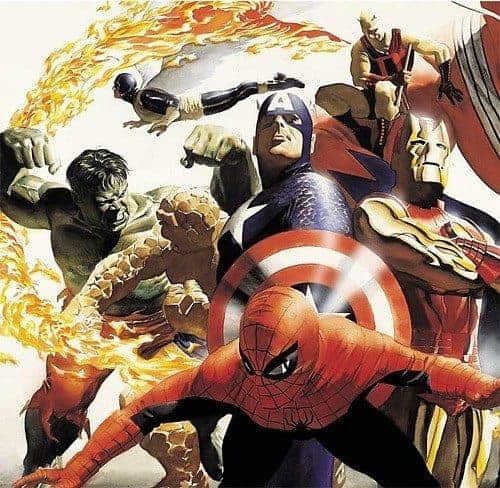 The story is not the last thing that was overhauled in this title. When choosing a side in the Civil War story arc you can receive certain boosts that only help Anti-Reg heroes and certain boosts that only help Pro-Reg heroes, the bottom line is that it is up to the player to decide how they want to play the game. I found this part of the game to be a huge draw and as the oracle so correctly stated: “the problem is choiceâ€. Now finally the big draw to the game is the “Fusion Powers.” This is a new system devised for the game where you and another super-hero (or friends playing the game) literally combine their super powers for an ultimate omega super attack that wipes out half of the enemies on the screen. In fact the game encourages you to try every single Fusion Power feature that the game has to offer. This was a great idea that is brilliantly executed, bravo Activision. The user will build up a meter by landing consecutive attacks on enemies, eventually when this meter fills up depending on which console you are playing on you will press a series of buttons to choose which power to use and with whom. This system forced the developers to balance all of the characters so that no matter what line up you use players should have an effective team. (This means that Storm actually works in this game) There were four main power types available, clearing Fusions, Tanking Fusions, and launching fusions. Have fun discovering all of the powers that your favorite super heroes offer to crush your enemies.

So what is the final verdict? I really enjoyed this game, it was well though out, well designed, well balanced, and heck of a lot of fun. I myself am a Marvel fan and itâ€™s nice to see so much effort put into a game to make the fans enjoy it. This game is not just for the fans however, if you have someone who is not really aquatinted with all of these characters and the Marvel Universe, and are interested in both, play this game with them. In fact I found this game is the most fun when four people play together. Not only did I enjoy this game I spent a lot of time collecting all of the Easter eggs and achievements throughout the entire game. Activision tried as hard as they could to make the game feel as if you werenâ€™t repeating the previous game. However some may feel that they have done much of this before but without Fusion or a deeper story. So on that note if I had to give it an unbiased score, I give Marvel Ultimate Alliance 2 a 4/