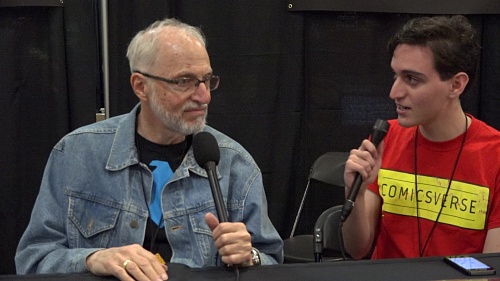 Recently, ComicsVerse had the incredible opportunity to interview legendary comics creator Marv Wolfman for our podcast. Even still, he’s such a prolific creator that we had questions left over! We caught up with him again at East Coast Comicon in New Jersey to ask him a few more questions. Watch the video above to see what we learned in our second Marv Wolfman interview.

We talked to Marv about the new DC Comics show TITANS, which was recently announced for DC’s new online streaming service, and whether he’d consider writing for a similar show. Then we followed up with him on some more CRISIS ON INFINITE EARTHS questions. Lastly, we heard his interesting take on why he doesn’t like to say what he’s working on now.

Marv Wolfman is perhaps best known for THE NEW TEEN TITANS, but he also had acclaimed runs on DAREDEVIL, SPIDER-WOMAN, FANTASTIC FOUR, and many more series. He is also responsible for the masterwork CRISIS ON INFINITE EARTHS, the original universe-altering event comic from which all the others derive. He created numerous characters, including Raven, Starfire, Cyborg, Terra, and Deathstroke for DC, and Nova, Bullseye, Blade, and Black Cat for Marvel. Many of these characters went on to become iconic, even moving from the page to the screen. Deathstroke, a Teen Titans antagonist, is now a fan-favorite with his own ongoing series. Raven, Starfire, and Cyborg are thought of as core members of the Teen Titans. Cyborg has moved on to join the Justice League and will appear later this year in the JUSTICE LEAGUE movie. Marv Wolfman’s importance to the comics industry we know and love is immeasurable.