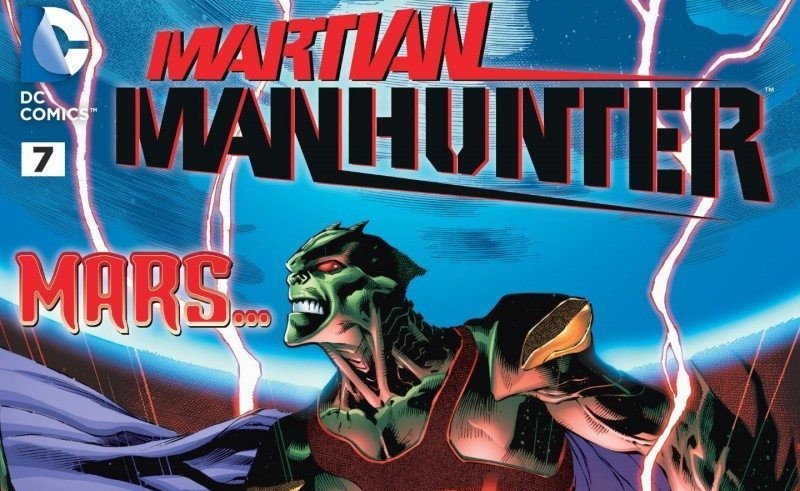 MARTIAN MANHUNTER #7 brings a lot to the table. The series so far brings a mixed bag of intrigue, mystery, creativity, and confusion. As a big J’onn J’onzz fan, it’s great to see his solo series. Martian Manhunter is a very overlooked and underrated character, often seen as a Superman rip-off, but his history runs deep in the DC universe, which includes being a founding member of the Justice League of America.  In fact, a whole article could be used to discuss J’onn J’onzz’s history and development as a character, and luckily ComicsVerse will indeed do just that, but in the form of a podcast, so keep your

eyes peeled for when that comes out! 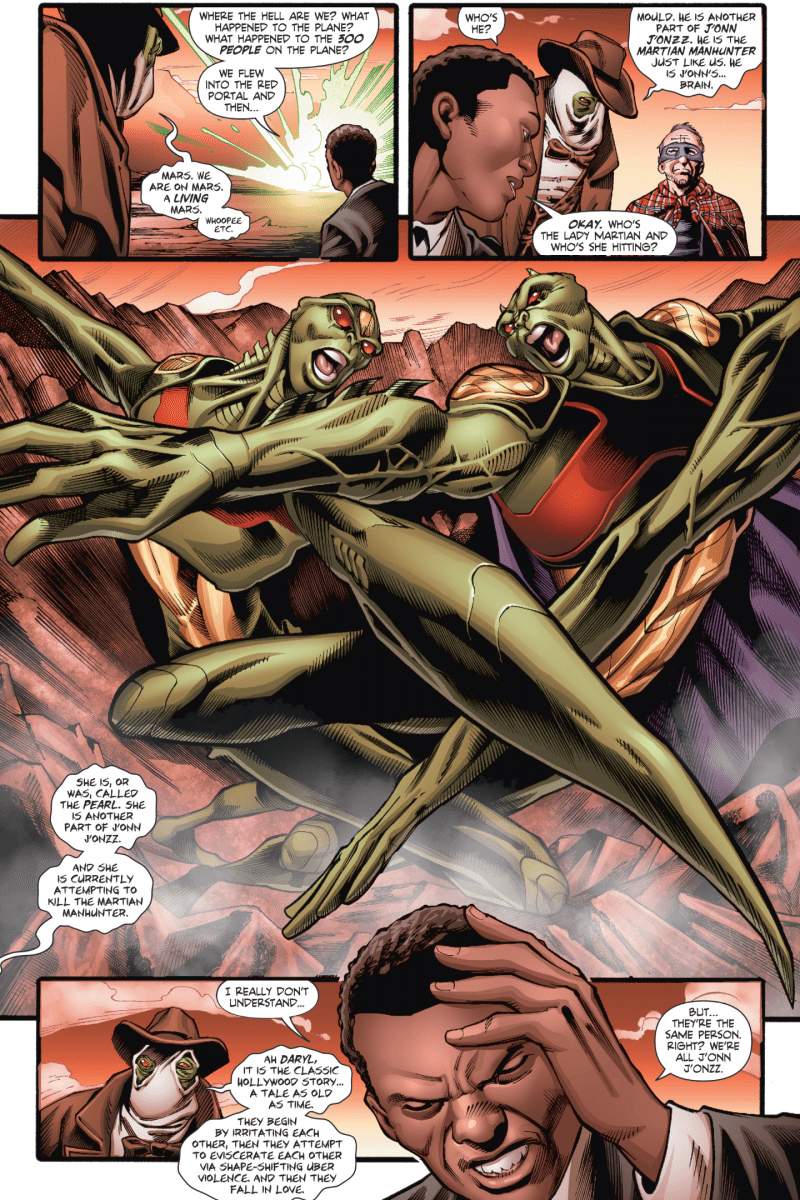 The artwork throughout the first seven issues has been pleasantly consistent.  The colors are vibrant, the lines are thick, and the scenery is detailed

. The visuals of this book make one feel transported into the Martian Manhunter’s world. As far as the depiction of characters goes, I believe there is a decent split of realism and an animated like quality.  Muscles aren’t crazily defined, and there isn’t a lot of sexploitation in the characters.  There are quite a few diverse looking characters to include and stay consistent with, so it’s a very admirable task in that respect.  The juxtaposition of panels is fluid and allows for nice transitions, as well. Overall, it’s quality work that hasn’t slipped up when it very easily could. 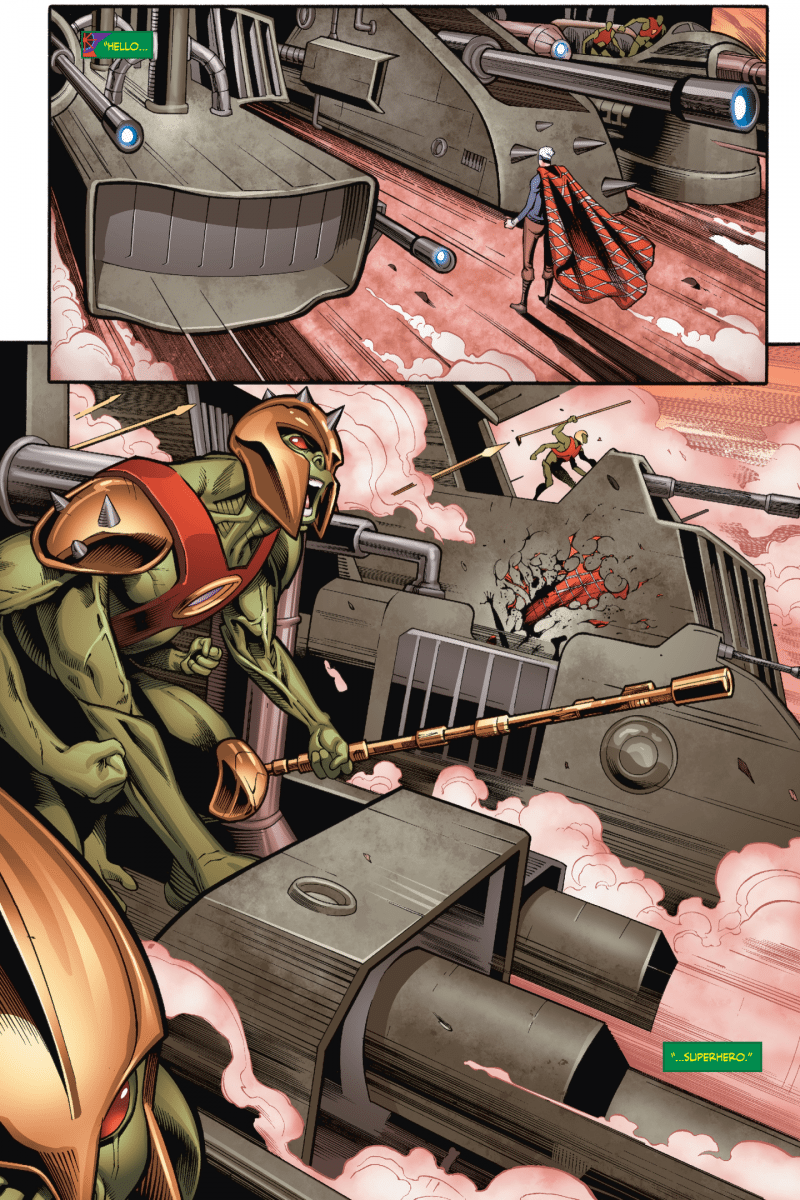 LISTEN: Looking for something new? Check our podcast on THE CARTOON HISTORY OF THE UNIVERSE! And stay tuned for the MARTIAN MANHUNTER episode!

The story Rob Williams has constructed has brought an array of emotions.  I can’t quite comprehend the plot yet; which, in turn, is impacting my decision to form a solidified opinion on it. It’s a similar feeling to Christopher Nolan’s Inception.  I’m trying to weigh if it has a good complexity to it, or if it’s just unnecessarily convoluted. However, Williams has crafted an arc that is unique and ambitious, as much as it is ambiguous.

Basically, J’onn J’onzz discovered that the Martian race is planning on using him as a weapon to destroy Earth and bring life back on Mars. To prevent this, J’onn split his personality into multiple beings, some resemble humans with implanted memories, others like the humourous Mr. Biscuits is a deformed green martian. The humans are diverse in ethnicity and lifestyle.  There’s a male African American F.B.I. Agent, a female Middle Eastern thief, and an older Caucasian male.  Each one represents a different aspect of the Martian Manhunter’s personality and often

think independently.  It’s a lot to take it, but as confusing as it may be, it’s actually really refreshing.

Each personality/person/martian/J’onn/who-the-heck-knows has been growing and expanding as the series goes on.  The female thief has transformed into a Martian named Pearl and fights with another piece of J’onn that ultimately decided to use himself as the weapon that Martian Manhunter tried to avoid by splitting himself up in the first place. The book

gets more complex as Alicia, a child that Mr. Biscuits and company befriended and helped save

in an earlier issue, shows up ready for battle now as an adult.  There are so many twists and very exciting cliff-hangers, and as confused as I am, the book succeeds in keeping me entertained and eager for the next issue.  What happened to Alicia and the timeline? What’s going to happen to Earth and Mars?  What the heck is going on with all these personalities?

WATCH: Love the art of MARTIAN MANHUNTER? Check out our interview at NYCC 2015 with another lovely artist, Sean Von Gorman!

Because of the complexity of this series, it would be hard just to jump into, but luckily it’s still fairly new and attainable at this point.  There is plenty this book is accomplishing:

I may be asking ‘What?’ as I read MARTIAN MANHUNTER #7 and the series as a whole, but it’s definitely got me hooked from a uniqueness and eager-to-discover standpoint. Overall, I recommend it!