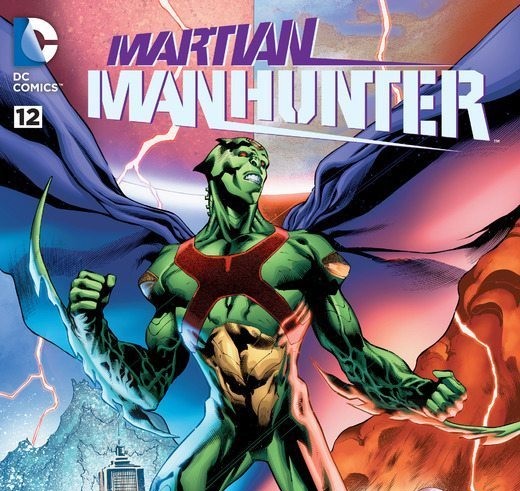 MARTIAN MANHUNTER #12, written by Rob Williams and drawn by Ben Oliver, is the final piece to the most recent J’onn J’onzz saga. In this issue, everything that has been muddled, mechanized, or murdered gets resolved. We learn

the fate of Mars, Earth, Alicia, and Pearl, and it’s not a typical superhero happy ending. Far from it, in fact. This extremely peculiar Martian Manhunter series has seen J’onn split himself into multiple people, and then transform into a massive humanoid vessel, all from trying to save

two worlds on the verge of colliding; or so he thought. The story was very nutty and at times, confusing trying to figure out what each personality meant and what exactly was going on. In fact, you can read my mid-series review here! 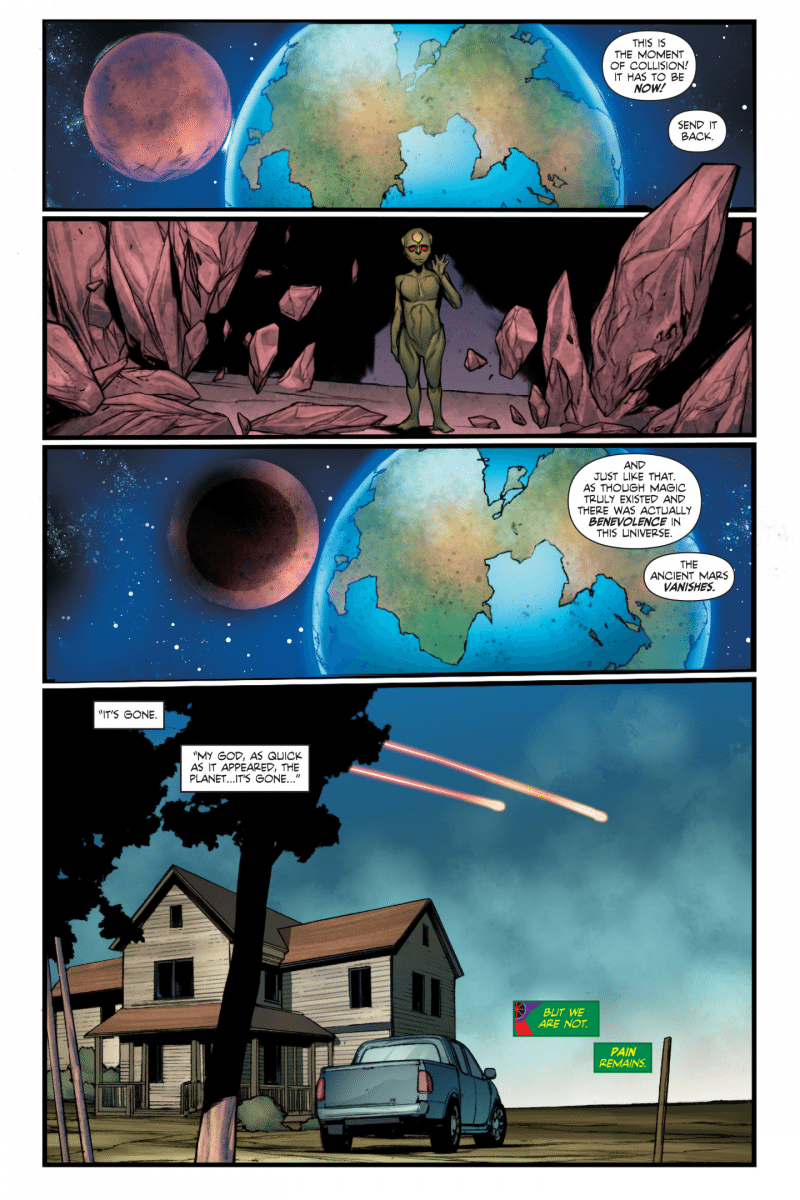 This issue is impossible to discuss without spoilers, so tread carefully if you haven’t read the book

yet. All the nuttiness is answered with what truly lies within Martian Manhunter’s core: sadness. J’onn’s anguish has manifested into a psychosis. Every Martian that has been shown has been conjured up, including the villain Ma’alefa’ak. He even absorbs Pearl, after he comes to grips with reality. As he reflects on how this could occur, Alicia and the humans get sent back to the present through a portal and all the Martians are sent to the past. His memory molded

these creations, which was a result of a millennium of loneliness.

READ: How was Martian Manhunter handled in SUPERGIRL!?

To be honest, I’m not the biggest fan of stories where the main character ends up crazy. It’s a device used too often to shock the audience; however, if there was any character where that characterization works

, it’s J’onn. Also the chaos surrounding him, which was different, engaging, and complex, changed his origin and make-up. I was a little uneasy about that, so the fact that Martian Manhunter was indeed under immense psychological torment was an odd relief. His essence wasn’t altered; rather, it was explored, making this book

, and series for that matter, quite beautiful

to finish. A somewhat confusing saga ends up being rich in depth and emotion, and it’s worthy of applause.

READ: Looking for another unique superhero comic? Check out our review of THE VISION #1!

art, but it still flows and evokes J’onn J’onzz’s powerful emotions. It’s a great reflection of the story and by no means a crutch. It’s a pillar. It holds up the written word with detailed 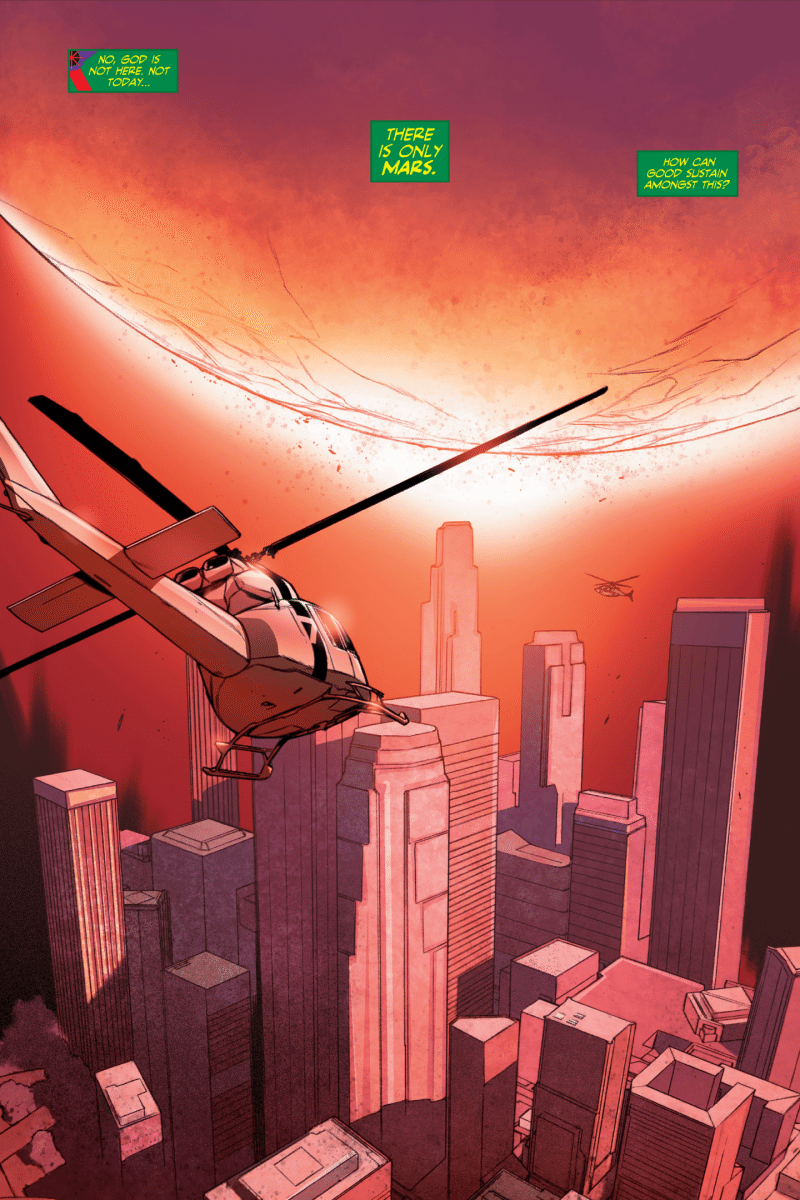 Rob Williams’ characterization of J’onn, Wessel, Pearl, Daryl, Mr. Biscuits, and Alicia has been fascinating to watch envelop issue after issue. The fact that they could each have distinct personalities and have their own unique vices with overarching growth is massively impressive.  I’ve said before in other reviews and in The Martian Manhunter Podcast that J’onn is a character full of depth. He’s crippled by severe depression

and loneliness unknown to any human being, and yet still strives to be a hero. This book and series is a culmination of the green martian’s soul. He’s fighting to be a hero while battling himself. That is what makes him an immensely tangible character because among all the zany action lives, there is an inner demon that is vastly more important. People can relate to his struggle and his fight for happiness. The pain he bestows is universal, yet rarely developed or discussed in superhero comics. It’s a shame to see Martian Manhunter have his run

end. Hopefully, DC will give him another go. J’onn is a character that should be showcased. He’s different, he’s raw, and he’s damaged. It ain’t easy being a person. It sure ain’t easy being green! 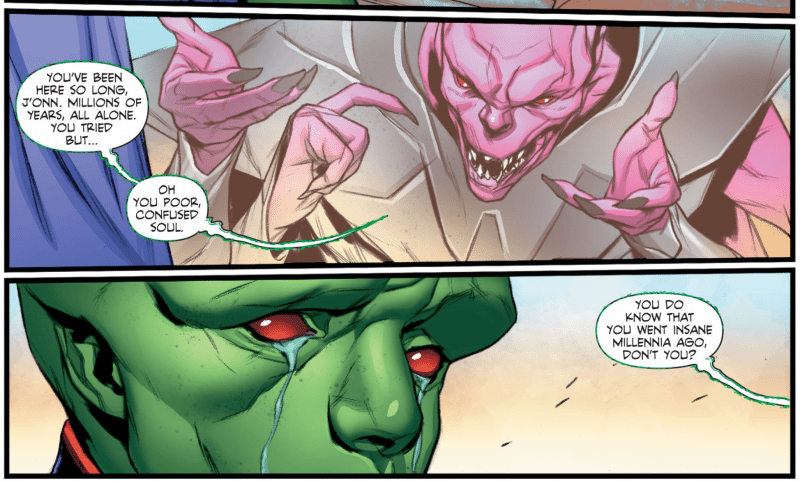