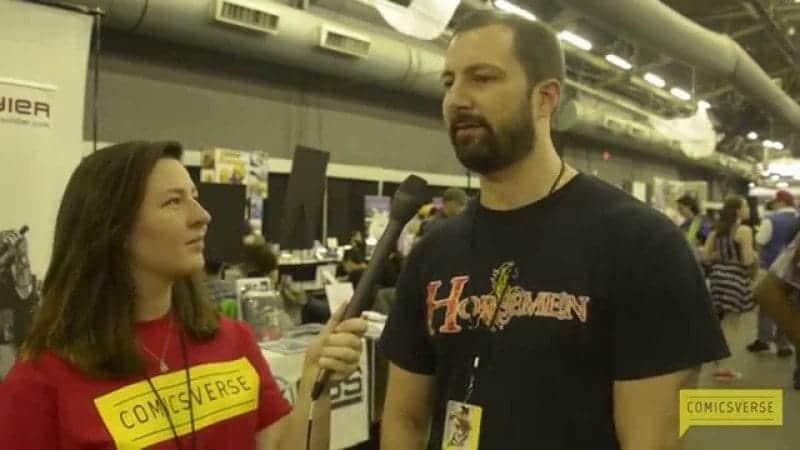 Whenever the team got to Special Edition: NYC we had a list of people that we knew about and had to interview. We scoured the con for them. We were intimately aware of their work from reading it for years. Mark C. Frankel was not one of these people, on my list, but I couldn’t have been happier to get pulled into a conversation with him. The creator of HORSEMAN and SIGNED C: THE MISSING in addition to being the CEO and CO of Wayward Raven Media, Mark C. Frankel is not new to the world of comics, but is certainly breaking onto the scene in a new way with a fresh perspective for anyone who is getting tired of only reading long running superhero comics with extensive back stories.

How do you distinguish your stories in a world saturated by superheroes that never seem to die or are never allowed to really change too much because they are connected to a million different arcs and universes? You do the opposite. “Dead is dead,” as Frankel says. There is no possibility for Jean Grey to come back, and no cast announcements that reveal your secret plan to bring back Jon Snow. Because of this Frankel and his company have allowed themselves total creativity to take their stories wherever they desire within shorter limited runs from five to seven issues.

Coming from a background in writing plays, Frankel came to the world of comics because it allowed him to do everything that can be done in a movie or a stage play, but with fewer limitations. These comments echoed a very popular sentiment that came up in almost every interview I did: comic books are a medium not a genre. And going even further with that comic books are not just about superheroes, which Frankel’s company, Wayward Raven Media, certainly embraces with open arms.