With March Madness just around the corner, we here at ComicsVerse thought it’d be fun to pit some of our fav (and not-so fav) Spider-Man villains against each other, March Madness style! Created by ComicsVerse writer Tim Stevens and run by ComicsVerse’s Editor-in-Chief Jordan Parrish, it’s a team effort. Due to the sheer number of Spider-Man villains out there, we weren’t able to fit all of them into this one bracket, but we got a lot of them!

So, *drum roll* with no further ado here is the 2019 Spider-Man Villains Bracket! 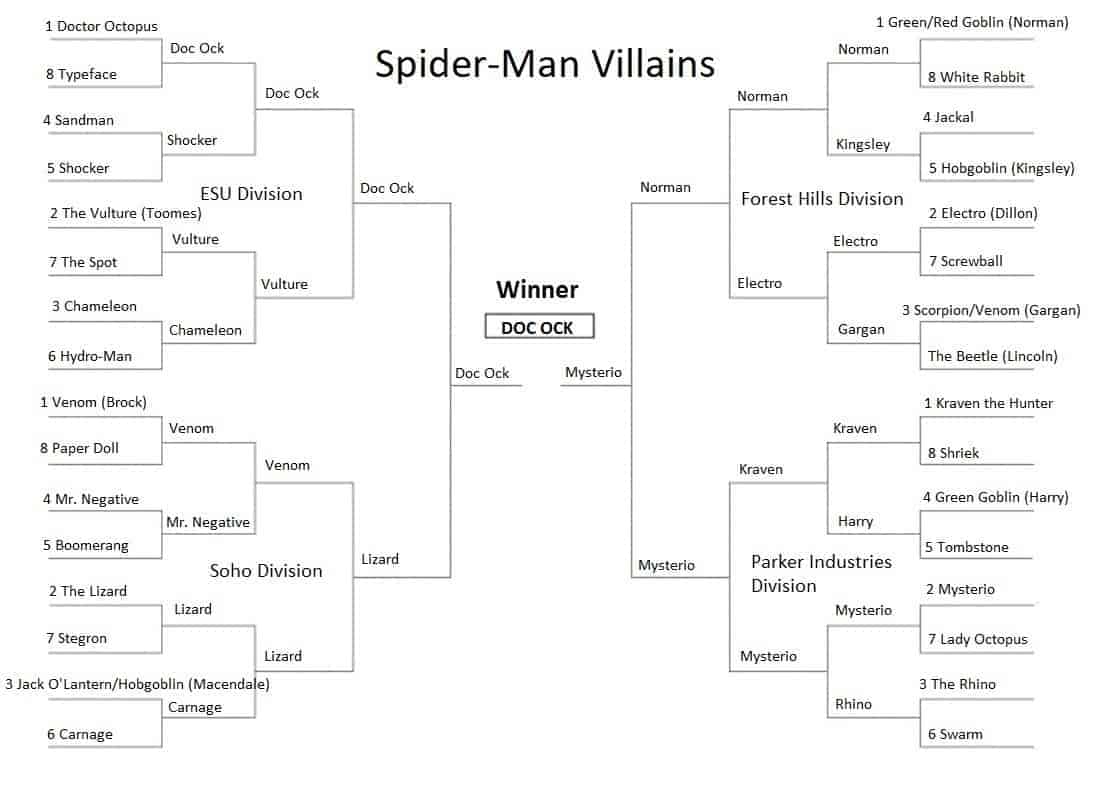 How did this tournament work?

We’re had you, our loyal readers, decide how each match-up ends up. Every day we need new contests to vote on you you all showed up in droves! You never missed the chance to support your favorite villain.

We updated the bracket every day and provided commentary on each round as it wrapped.

Thank you so much for doing this alongside us! Check out below for all the commentaries including the final round reveal of our champion!

The story of round one was higher seed dominance. Of the 16 match-ups, the lower seed only triumphed in three of them — Number 6 seed Carnage, and Number 5 seeds Shocker and the Roderick Hobgoblin.

The closest match by a wide margin proved to be Shocker’s 58-42 percent victory over Sandman. The widest margin came between Number 2 seeded Mysterio and Number 7 seeded Lady Octopus with the Criminal King of Special Effects securing a whopping 97% of the vote. On average, the winner scored over 60% more votes than their vanquished foes with a handful having over 90% more votes.

If you thought Round One was relatively free of upsets, please allow me to introduce you to Round Two. Not a single upset in the bunch. At the end of two rounds, as a result, it is the top seed against the second rated seed in each Division.

However, that’s not to say the matches did not have some thrills. In the match between Kraven the Hunter and the Harry Osborn Green Goblin, Harry jumped out to an early lead and held it for just over 12 of the 24 hours of voting. However, Harry’s reservoir of support dried up then and it was all Kraven the rest of the way. In the end, the Hunter cruised to a 71% to 29% victory.

Harry’s dad, on the other hand, crushed his opponent, the Kingsley Hobgoblin. Doc Ock followed suit, trouncing the Shocker. Both victorious villains ended up with over 95% of the vote in each case.

On Day 2, Lizard nearly emulated Harry Osborn as the reptilian rogue’s early in the day lead steadily eroded as time wore on. In the end, Lizard managed to hold off Carnage 64% to 36%, but if the polls were open a few more hours and the trend held? Who’s to say?

The closest competition on either day proved to be Electro against Mac Gargan. The leader changed at several points during the voting period with a late in the day rush finally lifting Electro about the Scorpion’s whipping tail. Final tally? 57 to 43%.

The Elite Eight proved a tale of two results. On one side, Green Goblin and Doctor Octopus utterly dominated their competitors. Going into the last two hours, it appeared we were going to get our first shutout as no one had pulled the lever for Vulture. By voting’s end, it was not as dire, but only just. Doc Ock sauntered to victor with 96% of the vote. Goblin did not prove as dominant but still was never threatened by Electro, ending up with a strong 88% of the votes.

On the other side of the ledger, the other two contests were neck and neck struggles with plenty of lead changes. With a half hour left, Venom and Lizard were literally tied. A few last minute voters flipped the lead between the two until the dust settled, giving Lizard a single vote victory. Kraven the Hunter and Mysterio’s match-up did not end up being as close with Mysterio winning 59% of the votes. However, they traded the lead early and often. It was only in the final three hours of voting that Mysterio pulled ahead to stay.

The Final Four, thus, ends up being two contests featuring a Number 1 seed from one division who easily won facing off against a number two  seed from another division who had to fight and scrape for every last vote.

With an hour left, Doctor Octopus and the Lizard were tied and Green Goblin held a one vote lead over Mysterio. Doctor Octopus dragged himself to victory, finally securing a 54 to 46% margin over his reptilian rival. Meanwhile, Mysterio fans went on a last minute — almost literally — voting spree and turned the whole contest upside down. By the time the bell rang and polls closed, Mysterio had gone from one vote down to a 18% margin of victory, 59 to 41%.

Now after 4 rounds and 30 match-ups, it all comes down to this. Doctor Octopus, the metal armed madman vs. Mysterio, the special effect super villain. One way or another, in under 24 hours, only one of these baddies will be hoisting the trophy as the victor of the first ever March Maliciousness!

Just past the halfway point in the final round, I sent out a note thanking my ComicsVerse colleagues for their involvement in March Maliciousness. At that time, Mysterio held about an 18% lead in the voting.

Now, at the end of polling?

DOCTOR OCTOPUS has proved victorious by a 70% to 30% margin! Just goes to show you, it is never over until it is totally over.

And that, of course, means that Doctor Octopus is your pick for past Spider-Man villain and the first ever winner of March Maliciousness! We honor his evil and kneel before his might!

See you all next year!

In the meantime, please feel free to comment below or drop us a line on Twitter to let us know if you think the right bad guy took the tournament!