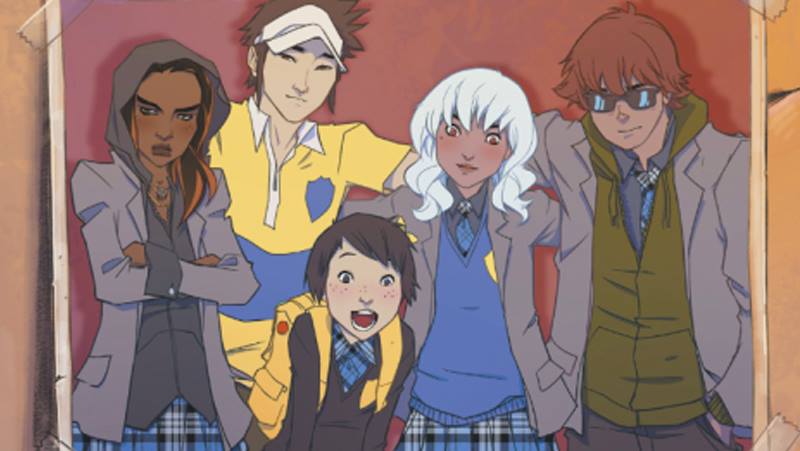 In comics, we constantly find ourselves surrounded by characters who remind us of people we know in real life. Your friend may not be the fastest man alive, but they are pretty light on their feet. Your professor may sometimes remind you of the cunning Lex Luthor with how they run their class. Maybe you, yourself, have an incorrigible white knight syndrome like Superman.

It’s always nice to see these bits of reality within our favorite fictional stories. But every once in a while there comes a character that you wish you had in your own life. Someone who you would love to have alongside you as you face your own not-so-super life.

That’s exactly the type of person GOTHAM ACADEMY’s Mia “Maps” Mizoguchi is. She’s gained the love of fans everywhere, but why? Here are my five reasons for why Maps is the one person you truly need in life.

I trolled around the reviews section of goodreads.com and amazon.com, and one thing most agree on is how Maps’ quirkiness is endearing.

“Maps (Mia) Mizoguchi is probably going to be a favorite character of many readers.” – Reading Bifrost, amazon.com

“I had a soft spot for Maps Mizoguchi, Olives ex-boyfriend’s little sister, she felt very much like Jubilee from X-men and I love her. Maps is sometimes too curious for her own good, very brave and I just can’t help to like her. She is just a perfect troublemaker and I can’t wait to see what the future will have in store for her.” – Magdalena, goodreads.com

“I loved the cute Maps character (the little freshman, Kyle’s little sister) who follows Olive around everywhere and talks constantly about her adventures playing D&D… She was adorable.” – Carmen, goodreads.com

She’s a total nerd, and has no problem letting everyone know. It’s always good to have a diverse group of friends and adding a geek just provides a new dynamic. They introduce you to concepts, fandoms, and a whole new “nerdy” culture that may have seemed too daunting to dive into in the past. Most importantly, by letting her freak flag fly, Maps creates a comfortable atmosphere. Her friends aren’t as self-conscious about their own weird personality traits.

A born explorer with an insatiable curiosity, Maps is also the one who ends up excitedly dragging Olive on missions through the secret passageways of Gotham Academy. And she’s totally unapologetic about being the pushy person in their relationship. Instead, she cares more about the adventure. Once again, this showcases a friend who continually adds new experiences to your life.

Having a friend who’s always down for something new, whether it’s intellectually interesting or of a humorous nature, is something everyone could use in life. We need people who push us to do the things we need to. Maps doesn’t believe in a life half-lived and would make sure yours was as full as can be.

This may seem like a given, but Maps is the ideal best friend. I know this term is fluid – there are so many types of best friends that we come across – schoolmates, hometown bff’s, work partners. Some people are lucky to have many people they consider best friends.

But Maps is a very specific type of best friend. She’s the ideal cheerleader – the one who is always supportive, but also knows when you need some “real talk.” This means that sometimes she has to play devil’s advocate and show her friends that what they’re thinking or doing  might not be what’s best for them. Sure, she supports them, but she won’t sit around and watch them self-destruct. And that’s exactly what she does for Gotham Academy’s leading lady, Olive Silverlock.

They may have had a rocky start, after all, Maps is the younger sister of Olive’s ex-boyfriend Kyle, but they manage to forge their own solid friendship through mischief-making and mystery-solving (just ask the ghosts they follow or the headmaster they torture). At first, Olive looks at Maps like she is just another wide-eyed freshmen. But before long, Maps is her most trusted confidant. Some fans even connect them to the Dynamic Duo.

“I can understand why Cloonan/Fletcher have put these two together in a Batman-themed comic: they’re the tween girl equivalent of classic Batman and Robin. Olive is quiet but clever, headstrong, and resourceful (Bruce Wayne/Batman) while Maps is the bubbly talkative sidekick who helps draw out Olive from stewing in her own head (Dick Grayson/Robin). They’re both amateur sleuths and Olive saves Maps and others when trouble arises. Ok.” – Sam Quixote, goodreads.com

Even with the drama between Kyle and Olive, Maps never stops rooting for her best friend to always do what is best for herself, no matter what boys get in the way or what Batman says to dissuade her.

READ: If you like DC analysis, check out this article about The Batman Gambit!

And while we may not all fight bad guys, we do know the meaning of having your friends’ backs no matter what. In Issue #8, when Olive’s mother dies, Maps’ brother Kyle is the one everyone looks to comfort her. But he’s her ex, and even if they’re still sort of friends, they’re not close anymore. No one points this out except Maps. She tells Kyle that Olive needs her and is the first person to cheer Olive on when she gets back to herself. Cheerleader best friend, back at it again.

3) She’s an expert at breaking down walls

When he first pops up as a transfer student in Gotham Academy Issue #7, Damian Wayne was not looking to make friends, let alone develop feelings for anyone. But unfortunately for him, things don’t always work out the way we want them to.

Similar to how Olive’s cautious nature tempers Maps’ enthusiasm, Damian’s apathetic façade also serves as a foil by standing in stark contrast to her passionate nature for everything ranging from her Serpents & Spells games to her friendships. Also like Olive, he didn’t really want to put up with her motor-mouth.

And yet in the end, Damian gifts her with a Batarang and his trust. As the son of a hero and a villain, Damian is not exactly known for the trust he puts in others. He’d much rather go his own way and work alone. So for someone to breeze in and break down his walls? That takes someone special, someone patient.

Everyone puts up walls from time to time because we’ve all been hurt before. However, sometimes luck is on our side and we meet someone who makes us want to believe in the world again and not be so severe. That someone is Maps. Just like how she won his affection with her positive attitude, she would win our respect with her perseverance.

4) Won’t give up no matter what

Maps’ courage is what allows her to persevere when it comes to getting people out of their shells. Olive is pretty much done with trying to solve mysteries when Maps is assigned as her freshman mentee in Issue #1. That may sound very “teenage drama,” but Olive’s mother was locked up and her father was gone. Her new guardian was broody and mysterious Bruce Wayne, and she was newly single – not exactly things that leave you happy.

But Maps brought her out of this funk, and is the person who consistently keeps Olive from drowning in sadness. Olive makes it clear that she doesn’t want to be saddled with Maps in the first place, but the younger girl just keeps trying. I think Olive finally gives in because she realizes how steadfast Maps is. Finally there was someone around who wouldn’t abandon her. No matter how many times Olive tries to distance herself from all her friends, Maps is the one to reel her back in. No matter how many times Olive gets a crazy plan, Maps is the one to follow her into the dark.

She doesn’t give up on people just as much as she doesn’t give up on solving mysteries. This is courageous in its own right because to do so, you have to give up a part of yourself. You have to have faith in someone or something that may let you down. We all need someone who’s willing to take a chance on us, even if we’ve messed up before. Sometimes we end up with our back against the wall, all alone and ready to give up. But a friend like Maps wouldn’t leave us to fight our battles on our own. No matter what, they’d always have our back.

5) Is the glue that keeps the Gotham Academy gang together

Maps is most definitely the glue in the Gotham Academy gang or as she dubs them, the Pizza Club. Everyone looks to her as the expert on the weird and unexplained occurrences that happen within the walls of their school. They depend on her for theories, battle strategies, and her optimistic outlook. There is no doubt that she is the leader of their band of prep schoolers, despite the fact that she is the youngest in the group.

“Maps is, let’s be real, the star of this series and I love this kid.” – Nora Una Sumner, goodreads.com

“You have Mia “Maps” Mizoguchi, the young new student at the Academy to whom Olive has been assigned as a mentor/guide to acclimate her to the school… She is the propellant that thrust Olive into several of the situation they find themselves in, and in many aspects seems to be the glue that will hold this burgeoning band of junior detectives together.”– Stacy Baugher, amazon.com

Being the glue is in no way an easy job. You can’t take sides and must always have an open mind. You have the trust of all these people. That means the pressure is on you to do everything you can to keep them safe. This is Maps’ life. She takes on the job of the “mom friend” and tries to keep the gang from killing each other.

Every friend group needs the glue. They’re a vital component to the friend dynamic. But not many people want to be in that position because it often turns into them mediating conflicts. Sometimes they have to sacrifice their own happiness for the good of the group. Yet Maps is gladly willing to take it on.

A friend group without the glue is likely to fall apart. With no one willing to compromise or persuade others to do so, a group, especially one full of diversity and stubbornness, descends into chaos. Conflicts arise and can’t be solved. Eventually, their differences are too much to handle and they split up. I don’t think anyone wants that to actually happen to them and their friends.

She’s a hero in her own right. Like all good superheroes, she stands up for what she believes in and tries to protect the innocent. But like all every day heroes, Maps will look out for her own, first and foremost. She’s not the type of friend you let walk out of your life. Even the Pizza Club has had to run after her and apologize when they’ve pushed her too far. So if you have a Maps in your life, don’t let them go. And if you haven’t met someone like her yet, don’t sweat it – they’ll come crashing into your life someday and change it forever!

Pleas leave a comment if you’ve ever had a friend like her or if you think you’re the glue of your friend group!