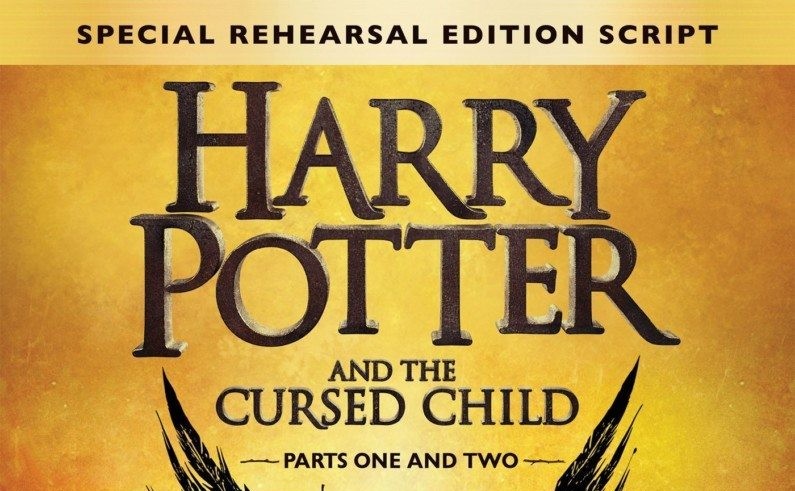 Harry Potter was an integral part of an entire generation’s childhood, but as children, we rarely get the opportunity to look at things with a critical eye. With the return of J.K. Rowling’s magical world to both stage and cinemas this year, ComicsVerse will take a look at the Harry Potter series. We will explore the cultural representation of the books, as well as try to identify how the books ignited such a massive and dedicated following. To read the entire ComicsVerse Harry Potter Series, check out this tag!

If you clicked on this article, you’ve probably been waiting for this last HARRY POTTER installment for a very long time. For years since HARRY POTTER AND THE DEATHLY HALLOWS came out, fans have been waiting for more material about their favorite magical world. We were told over and over that there wouldn’t be any more books or movies (guess that ship has really sailed, huh?) and then we got Pottermore. While Pottermore promised a return to the magical land of HARRY POTTER and boasted brand new material from JK Rowling herself, it was ultimately a let down for myself as well as for many other fans. So instead of relying on official canon information, the fandom kept up a strong intelligent discourse about HARRY POTTER. That’s partly the reason why, after an initial disappointment, I was willing to accept HARRY POTTER AND THE CURSED CHILD in whatever capacity. As a fandom, we have created enough material to last us several lifetimes. THE CURSED CHILD is just essentially the brainchild of another fan. I was ready to just have fun with it without worrying about whether my headcanons lined up specifically with the writers’.

And my overall impression? It reads like a really well-done fanfiction by really good writers. Some aspects of the book aren’t to my taste (Harry’s characterization as a father, for instance) but other parts of it made me squeal with a delight that harkened back to my eleven-year old HARRY POTTER days: Scorpius Malfoy is everything I’ve ever wanted out of a cast of characters. He makes everything I didn’t particularly like in THE CURSED CHILD worth it. And that’s my official impression as a Serious Literature Student. 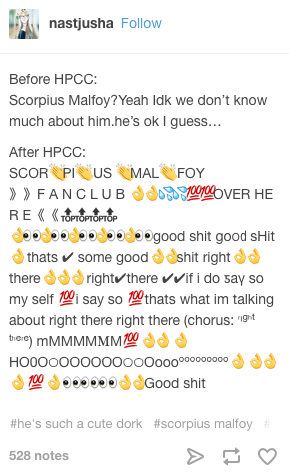 INTERESTED: In the pretty gay friendship between Albus and Scorpius that’s never acknowledged? Check out this article on queerbaiting in HARRY POTTER.

Now, that being said, as someone who spends most of her life analyzing and critiquing literature, I have some Things To Say™. At the beginning of the play, Albus Severus Potter and Rose Weasley-Granger board the train to Hogwarts and, as Harry Potter did in THE SORCERER’S STONE, they look for an empty train compartment. The only one they find has one current occupant: Scorpius Malfoy, a little cinnamon bun who swiftly becomes Albus’s best friend, even though it makes his cousin Rose want nothing to do with him. The rest of the book follows Harry and Albus’s estranged relationship, Albus’s and Scorpius’s friendship, and a plot to bring back Cedric Diggory using the last Time Turner that ends in myriad mishaps and alternate universes before Albus and Scorpius can set things right again.

THE CURSED CHILD also focuses mostly on two relationships: that between Harry Potter and his son, Albus Severus Potter, and the one between Albus and his best friend, Scorpius Malfoy. It becomes very clear at first that Albus and Harry’s relationship is strained during the best moments and absolutely non-existent at the worst. Albus is sorted into Slytherin and feels a disconnect from the rest of his family because of this, even though at the end of DEATHLY HALLOWS Harry makes it very clear that being a Slytherin is not a bad thing—something that seems to have been forgotten in this eight installment. Albus also blames Harry for the legacy he’s left behind and resents his father for the fact that everyone expects so much from “Harry Potter’s son.” The rest of the story is an exploration into their broken relationship, but we also see a plot point that harkens back to the original HARRY POTTER series: the return of Voldemort in one of the aforementioned alternate universes.

So let’s get into my more specific thoughts of what was great and what wasn’t about the series, while keeping in mind that when I say I didn’t like it, take with a grain of salt. As I said: I had fun with this and I expected nothing except for fun; in that regard, all my expectations were fulfilled.

1. Where is Teddy Lupin? Harry Potter was an orphan himself and if I’m remembering correctly, also the godfather of this child. Of course Teddy Lupin would be older than the kids attending Hogwarts and therefore wouldn’t be an integral part of the plot that takes place at school, but he wasn’t even mentioned. Surely he exists somewhere in the minds and lexicons of the adult characters, but they don’t seem to acknowledge his existence. Also, according to the HARRY POTTER wikia, we lost a great chance at some wonderful Hufflepuff representation. In short, even though I know that the format of this story is fundamentally different from that of the original novels, the scope of the world these characters existed in seemed incredibly narrow. In her original texts, Rowling never lost sight of the larger picture and even when characters weren’t involved directly in a scene or plot arc, Rowling made sure we knew that they existed somewhere and that somewhere outside of the big picture of this narrative, life was happening and moving and evolving. I didn’t feel this in THE CURSED CHILD, especially with the exclusion of Teddy Lupin.

2. Harry as a crappy dad makes no sense. Now don’t get me wrong, I never imagined he would be perfect, as no parent is. And I know that children who face abuse at the hands of their parents/guardians sometime imitate those actions when they are parents, but with all the social support that he has, I can’t imagine Harry would be as bad as this book makes him. Harry is surrounded by the most loving family in the HARRY POTTER world. In fact, everything Harry has learned about family has been from the Weasleys—who basically unofficially adopted him the first time they met him—and I can’t imagine that in fourteen years he would have learned NOTHING about parenting.  Harry Potter was always made to feel unloved and unwanted as a child; he suffered that pain, and I can’t imagine he would ever tell his own son that he wished he didn’t have him. I like to pretend that scene just didn’t happen.

3. The queerbaiting of Albus and Scorpius. Need I say more? Ugh.

That being said, I have seen fans getting unnecessarily angry over the plot and character portrayals and that’s wasted energy on everyone’s part. THE CURSED CHILD is essentially a published VERY POTTER MUSICAL, but slightly more serious. Because it’s not technically canon, it is 100% okay to disregard everything that happened and reject it. There’s no question that Jack Thorne did an amazing job and that we’ll be forever thankful even to have a little bit of the magic of a new book back, but ultimately he’ll never be able to do as good a job as Rowling would have done (or maybe, possibly wouldn’t have done, considering that the discourse about her has proliferated as fans grow older).

That being said, for what it is, there is much more I like about THE CURSED CHILD than I dislike.

1. THE CURSED CHILD, first and foremost, offers fans countless opportunities for capital-D Discourse. In the past ten years, fans have been having a ball examining the seven novels. They’ve touched on everything from why Lee Jordon would be a feminist to potentially boggling plot holes. THE CURSED CHILD has turned out to be no different. Just looking at the Tumblr tag will give you enough opinions from each side to come to the realization that there is no general consensus about the play in relation to HARRY POTTER canon. Many people recognize that the play is simply just published fanfiction inducted into canon by the author, while some (see below) seem to either 1) think that “based on a story by” secretly means “written by” Rowling herself or 2) paradoxically can’t read that statement plainly on the front cover where it also says: “A new play by Jack Thorne.” 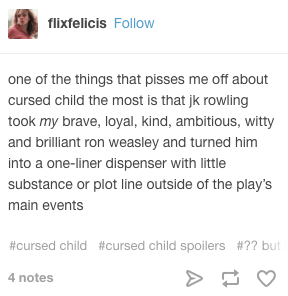 READ: What do HARRY POTTER and puberty have in common? Find out! 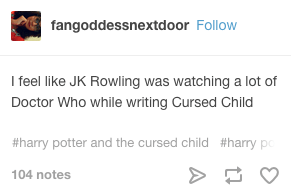 2. Please refer to the title. That’s right. The Malfoys. I have always, always, always had a soft spot for Draco Malfoy. Maybe it’s that whole attractive bad boy thing, maybe it’s Tom Felton, or, as I’d like to think (but is probably not true), the fact that he’s such a complex character one can’t help but be intrigued. …Yeah, that’s go with that. 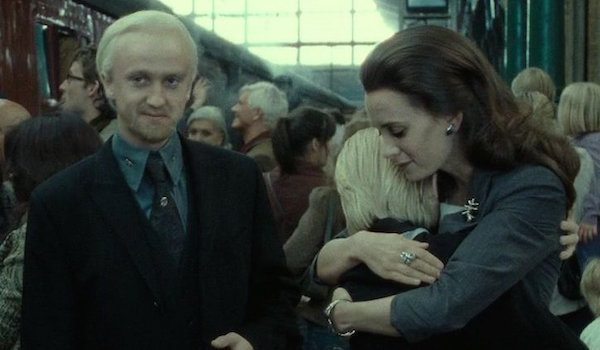 JK Rowling has said before that Draco Malfoy was never meant to be redeemed, but I never really listen to what JK Rowling says. I do think the author’s out-of-text ideas can add a lot to a story’s world, but honestly at this point I pretty much disregard everything she says. I definitely agree that young girls shouldn’t be idolizing and romanticizing young boys like Draco Malfoy, but as a writer and reader, the character of Draco Malfoy has always drew me. He’s complex. He’s morally screwed up. He’s vying for the attention and admiration of a family that he’s been told to respect. He comes to terms with the screwed up things his family has done and believes as he gets older. And when it’s all said and done, Draco Malfoy isn’t a villain—he’s not Voldemort. He’s a seventeen year old guy who needs to spend some time in magical juvie and do a lot of thinking about the indoctrinated beliefs that have been forced into him.

I’ll admit it, I am a hardcore Dramione shipper, but I also know that Draco is not the kind of guy you’d want to go after as a young girl. But the chance for development that I saw for Draco in the original HARRY POTTER series is realized here: his concern as a father, his wonderfully kind son, Scorpius, and the hints into his happy (if short-lived) marriage. And Scorpius has to be the most adorable character I’ve come across in years. My love for him is immense and unceasing.

There were a lot of things I wanted from THE CURSED CHILD and there were a lot of things that I didn’t get, but for what the play is, I’m happy with the result. It was fun, and isn’t that all we can really ask for? I will take my beautiful Malfoy son and father, pretend that another HARRY POTTER book didn’t queerbait and that Scorbus 2k16 is real and treasure the memory of buying the “eighth HARRY POTTER” book at Barnes & Noble at midnight forever.