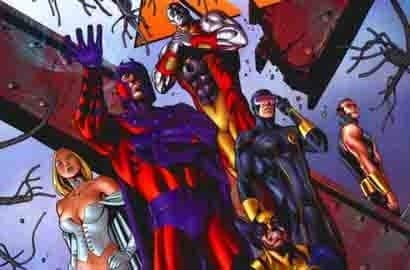 Every once in a while there’s a cool villain that becomes so popular, writers have to bring them over to our side. Deadpool got his start attacking superheroes, but now he’s a fan-favorite merc with a mouth and a heart of gold. Venom brought his savage alien cool factor over to the protagonist camp. The Mighty Morphin’ Power Ranger’s Green Ranger (who becomes the White Ranger, the objectively coolest Ranger of all), Vegeta from Dragon Ball Z and the list goes on.

But a change of sides is a much more complicated beast if you’re as high-powered and high-profile as Magneto. Faced with the almost-definite extinction of the mutant race, the master of magnetism has no choice but to fall in with the X-Men. In UNCANNY X-MEN #534.1, convincing the denizens of Earth-616 that he’s no longer out to crush them under his homo-superior heel isn’t as simple as changing a costume. And it seems Magnus seems rather fond of his red-and-purples anyhow—when superhuman PR specialist Kate Kildare tries to convince him to replace his scary reds (“Red screams blood, revolution, and in the US, communism.”) with white, he refuses, as it’s the color of “surrender.”

The fear thing? Magneto likes that. “Is it better to be loved or feared?” he quizzes Kildare. “Machiavelli knew the answer and so do I…” Being a PR pro, Kildare gets him: “Yes, I know, it’s feared. Because people who love you can hope for forgiveness if they betray you.” So what’s a guy to do if he wants a public to fear and respect him as an X-Man? A grandiose display of power that saves all their butts, of course—when an earthquake hits San Francisco, Mags saves millions of homo sapiens by manipulating the ferrous deposits in the ground and all the metal structures inside the buildings in the city. Now that’s how you make a villain into a good guy while staying in character! This tale did a good job of setting up a new tone for Magneto: megalomaniacal superhero.