Netflix is one of the largest entertainment services on the planet. However, in the past, they have limited themselves to movies and television. But no more. Partnering with Image Comics and renowned writer Mark Millar, Netflix has stepped into the realm of comic books. Their first comic, THE MAGIC ORDER #1, has finally been released with all of the polish you would expect from this union. Spoiler Alert: this is an incredible new release. Netflix and Image have hyped this book for months, and for other companies, that might lead to a failure to launch. Most companies have a hard time meeting all the hype. However, as you will discover in this review, THE MAGIC ORDER #1 lives up to and surpasses that hype.

The world has been saved. The monsters, true beings of horror and bloodshed, all seemingly died centuries ago. Now, our saviors live among us without our knowledge. These great wizards, magicians, and sorcerers go about their day like any of us. They live normal lives. However, when the sun goes down and the remaining monsters step out of the darkness, they step up to stop them. Now, though, someone has killed one of their leaders. And he is only the first. Someone has come for the Magic Order, and only the Moonstone family can figure out who. 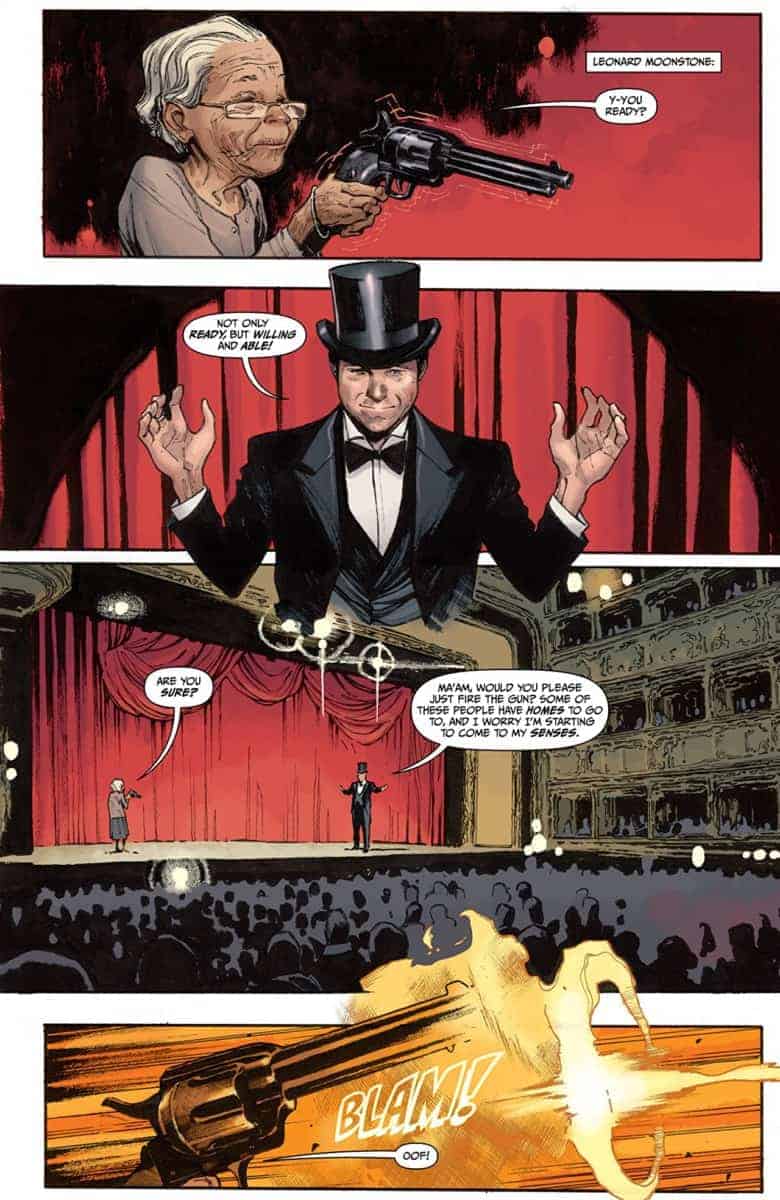 Plot or characterization are the elements that cement a comic’s popularity. However, readers witness the art long before they see the story. And THE MAGIC ORDER #1 has some of the absolute best art of modern comic books to date. Mark Millar has teamed with artist Olivier Coipel, one of my all-time favorite artists. His work is so dynamic, with a deep understanding of character design and atmosphere. Coipel knows visual storytelling, and the way he approaches this plot is nothing short of brilliant.

The opening scene alone, a murder draped in shadows and blood, feels entirely claustrophobic but in the best way. As the story continues on and we get closer glimpses at the magic at play, Coipel continued to astound me. Near the end, the magical murderer bends reality around a character in one of the most stunning visual sequences in modern comics. That is the polish that I’ve come to expect from this artist, and I’m never disappointed.

Addiction, Trauma, and Nirvana in SKIP TO THE END 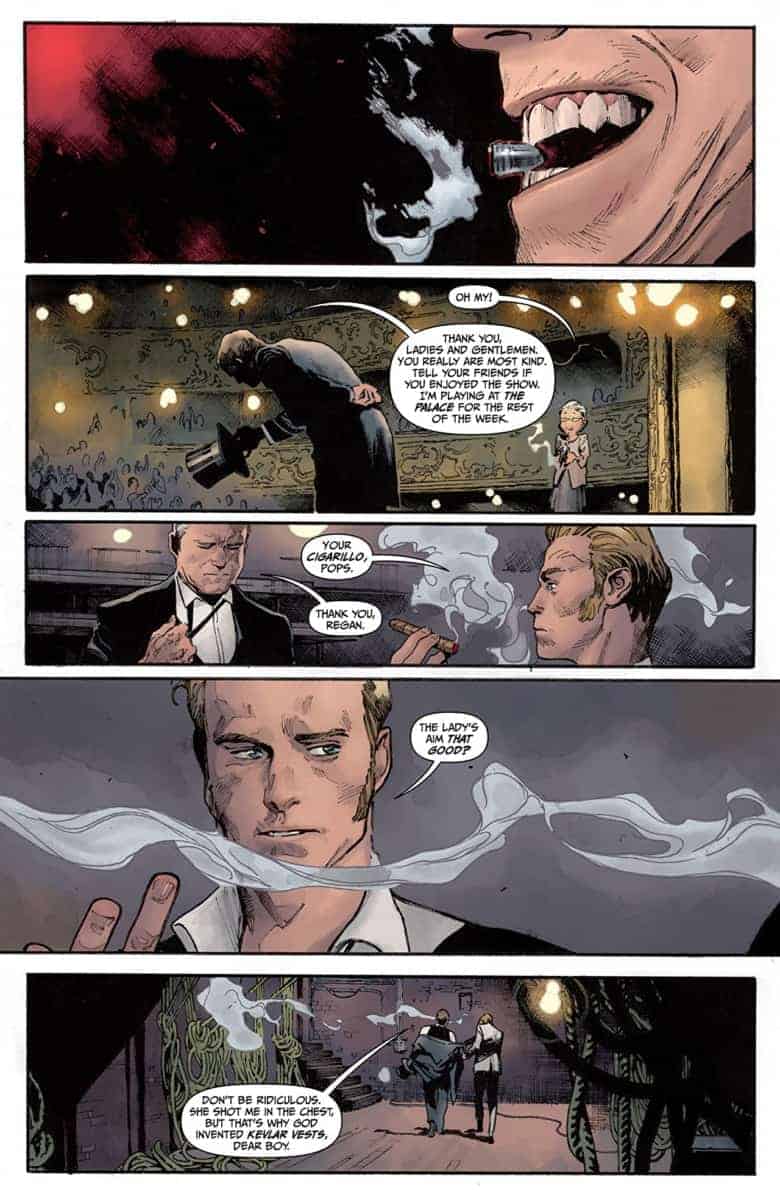 Much like his artistic partner in THE MAGIC ORDER #1, Mark Millar knows storytelling. His work here, though, outshines much of his previous work. The premise alone hooked me. The urban fantasy genre has needed some fresh ideas for a long time. The combination of mob mentality with these magical protectors just feels right. More importantly, Millar does the work to make it that way. He focuses in on the Moonstones, and through their singular experiences, we get to watch this world slowly build up around us. This murder is deeply personal to them, and that makes this story feel important. The way these characters react and the choices they make are logical in that context.

I also appreciated the fact that this didn’t feel like a murder mystery story. So many urban fantasy stories put their characters into the role of an investigator. These characters, though, feel like a real family that has been attacked. The tension escalates immediately when the murdered mage is called a cousin. This makes the plot more of a revenge narrative than a mystery. There isn’t a sense of good vs. evil.

THE MAGIC ORDER #1 lives comfortably in a gray area with likable characters who do bad things. When it all boils down, this personal narrative functions to draw in the reader. It puts them in the shoes of the lead characters. Millar asks what we would do if our family members were brutally murdered, and he captures that grief in a believable way. With that strong connection to the story, I felt wholly invested in every twist and turn. 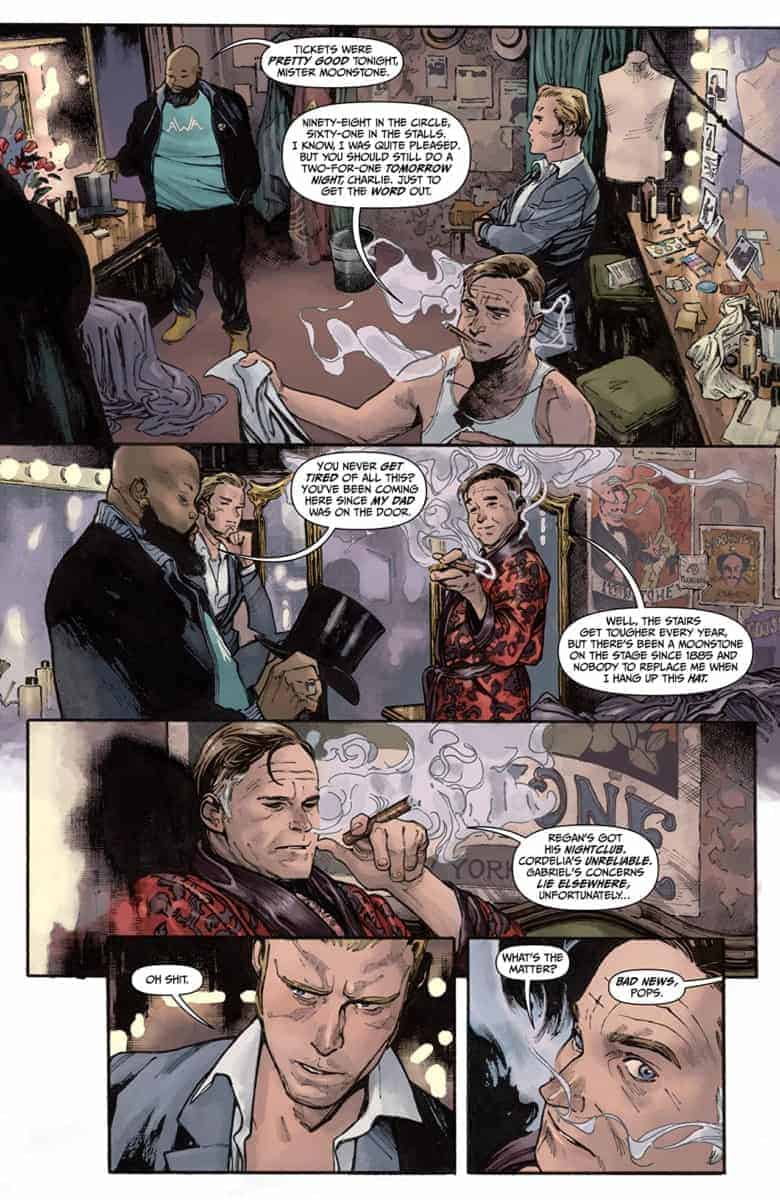 It should be clear, THE MAGIC ORDER #1’s plot cannot be separated from its characterization. This is a huge positive, as it further strengthens the personal narrative of the Moonstone family. That family, in particular, has some incredible character moments. Each individual feels wholly unique, with huge and distinct personalities. From Cordelia, the alcoholic birthday magician, to Gabriel, the family outcast, the characters take on a life of their own. Also, they have their own squabbles and motivations that, presumably, will drive them to the heart of this mystery.

Did DEADPOOL 2 Make The Right Choice With X-Force?

Gabriel’s story is especially intriguing to me. While the others feel rather archetypal at this point (the Screw-Up, the Boss, and the Enforcer), Gabriel seems to be the one with the most inherent intrigue. I especially loved the fact that he shies away from magic. He almost seems to detest it, and with its apparent connection to his daughter’s death, this makes total sense. At this point, Millar seems to want Gabriel to take the lead in this story, which I think is a good decision. With so much magical weirdness going on, it would be nice to have a more grounded character being the point of focus throughout.

THE MAGIC ORDER #1 is one of the best new releases to come out of Image in a long time. Considering this company is known for stellar creator-owned storytelling, this should say a lot for the quality of this comic. The narrative itself is incredible, using a personal tragedy to fuel a powerful revenge story. Also, a unique and likable cast of characters bolsters that narrative. Most importantly, this fantastic opening salvo looks absolutely stunning under Olivier Coipel’s pen. I cannot wait for the next issue to release. The groundwork is nothing short of perfect.