Have you ever met a lesbian werewolf couple? What about a centaur who works at a coffee shop? Well, you can in MOONSTRUCK Vol. 1! Written by Grace Ellis and illustrated by Shae Beagle, MOONSTRUCK is a tale filled with magical creatures and how they live in and interact with a more modern world.

The Magic and Mysticism of MOONSTRUCK Vol. 1

MOONSTRUCK Vol. 1 follows the adventures of Julie, who is a werewolf, and the magical creatures (and one human) that make up her friends. We begin the story when Julie is telling her friend Chet, who happens to be a centaur, about her date. Julie gushes about how wonderful Selena, the girl Julie went out with, had seemed. The coffee shop where they work has a lot of business at the time, but Chet and Julie can’t help but discuss the amazing date and the hope Julie has for the next one. While a second date does happen, all does not go as planned. Disaster ensues and Julie and Selena are thrown into a situation that they try to fix in order to save their friends. While things do become dangerous and unpredictable, the adventure still proves to be worth the trouble.

The Good, the Bad, and the Werewolf

The plot of MOONSTRUCK Vol. 1 is enthralling. Grace Ellis’s story is multifaceted; it has cute, funny, serious, and dangerous moments. The cute and funny moments juxtapose the serious and dangerous ones, making them all the more effective in eliciting emotions from the reader. Also, there is a book series Julie loves within MOONSTRUCK that appears throughout the comic called The Pleasant Mountain Sisters. The Pleasant Mountain Sisters’ story mirrors the plot, giving readers a broader look at the overall story.

MOONSTRUCK #1: Monsters and Magic and Myths, Oh My.

The emotions elicited from the reader in MOONSTRUCK Vol. 1 is powerful and widely varying. Yes, we have cute moments that make us feel fluffy inside. Yes, we have moments that make us smile and laugh. However, we also have parts of the story that make us nervous. We worry about the characters and become uncomfortable for them. The fact that the plot can bring out these emotions proves to the reader that the situations are important and worth reading. The many different emotions make the comic realistic. These emotions get us invested in MOONSTRUCK Vol. 1. 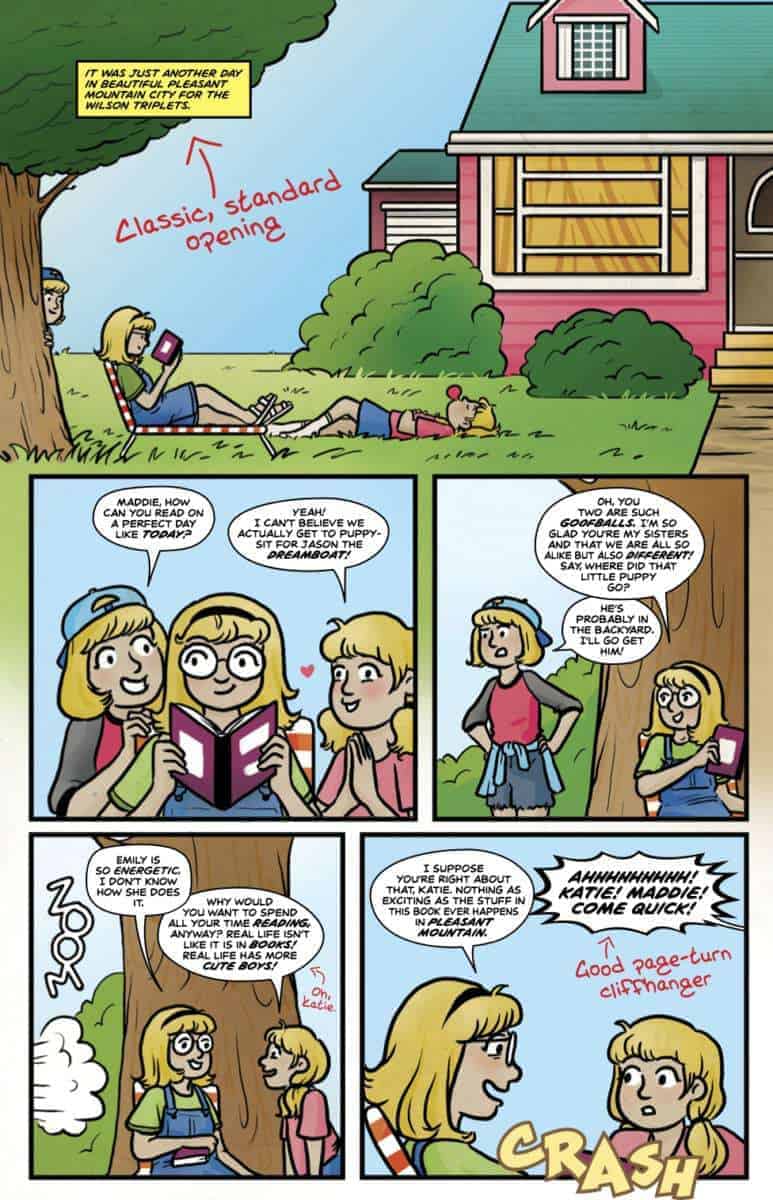 The Pleasant Mountain Sisters series parallels the plot of MOONSTRUCK. When tough times happen in Julies’ world, we see problems happening within The Pleasant Mountain Sisters’ adventures. These problems, while not the same as those of the main characters, emphasize the seriousness of the situation and the relevance of given details. The parallel of the two stories hints that things are not as they seem and that the worst may not be over, without revealing the details. This allows for suspense while maintaining elements of surprise.

The characters of this comic are complex and realistic. We watch shy Julie struggle with her werewolf side and her timidness. Then, we see the confident Chet have their feet swept out from under them. We also get Cass the Psychic having trouble deciding how to share what she sees in visions, or if she should even share this information at all. Julie, Chet, and Cass having such problems, and dealing with them how they do, make these characters real to us.

5 for the Fandom: Comics for STEVEN UNIVERSE Fans

Julie’s shyness makes living life difficult for her, showing us she is just a girl trying to be normal. We see her struggle with the idea and identity of being a werewolf. She tries so hard to deny and hide it, yet it is still part of her. In the very first issue, we see her running away and crying when she begins to turn into a werewolf. She has trouble accepting this part of herself. She doesn’t want to be like this, even though society accepts creatures like her. Having this problem shows us how real she is.

Chet and Cass also have a lot of dimensions to them. We see Chet portrayed as a sassy and caring friend. They appear to be outgoing and confident, at least when it doesn’t involve their crush. Even when something tragic happens, the only thing that truly crushes Chets’ spirit is their crush seeing them in a poor state. Cass has a similar duality. She always puts on a good face, even when her visions spell out doom. She tries to avoid the inevitable without telling her friends what is to come so that they won’t be scared. The duality of Chet and the caring of Cass make them relatable and real characters. 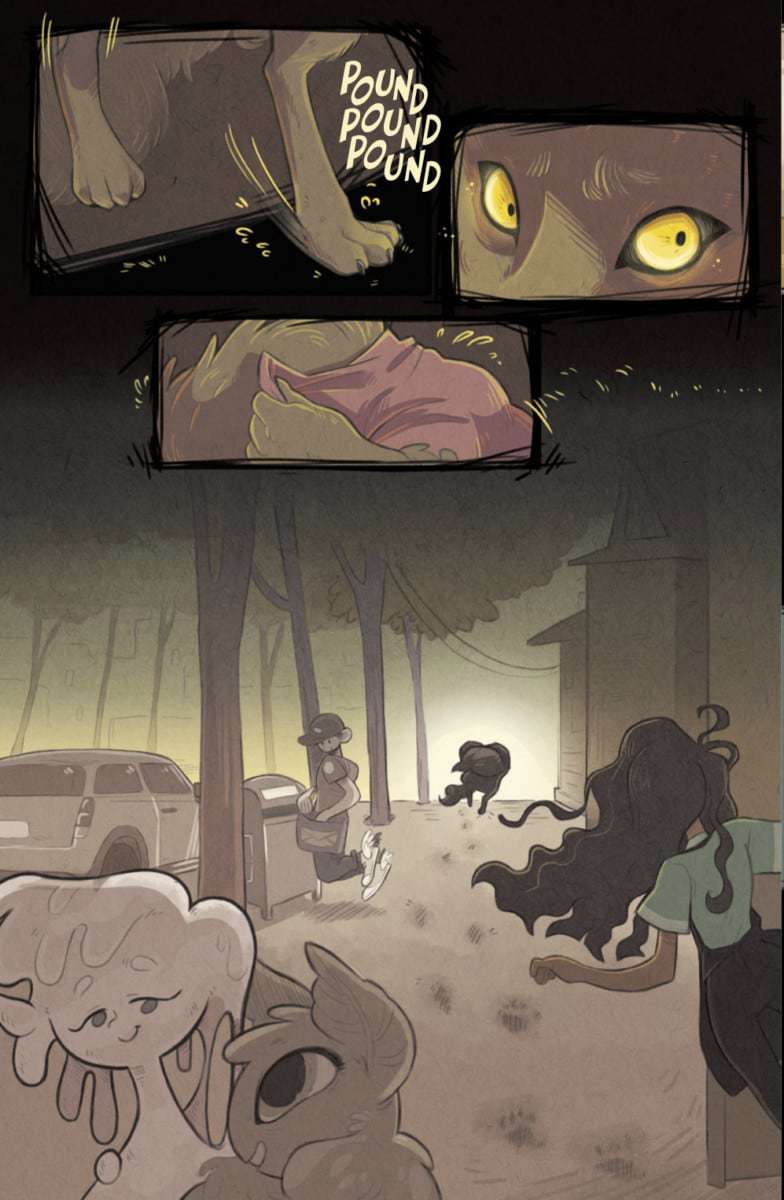 Shae Beagle does a wonderful job creating extremely diverse character designs. Tall to short, wide to thin, and more — we get a range of different physical features represented in one convenient and marvelous comic. Caitlin Quirk also does an amazing job at displaying different moods of the story through the coloring. We get to see the emotions first and feel them after reading.

Interview with the MOONSTRUCK #1 Creative Team

In MOONSTRUCK we get many different body types, not just the typical combinations of tall and thin or short and chubbier. We also see differences in facial features, such as Chet having slightly smaller eyes than some other characters. The wide range of visuals used for characters is not limited to human features. Since many characters in MOONSTRUCK are fantasy creatures, their illustration is varying. We see a minotaur with detail in the bulls’ head, Chet in their plaid kilt, even Julie in wolf form with fluffier fur than expected. This attention to detail makes characters more realistic because they all differ in many ways, shapes, and forms. This art, however, isn’t very realistic. It’s very cartoonish and that pulls me out of the story a bit.

Caitlin Quirk’s coloring does a lot to set the mood. When Cass has her visions, the background becomes black and a vibrant purple. This conveys a sense of mysticism and danger. This purple is vibrant enough that it draws your attention. We see just enough black used to complement the purple so that we process these moments as dangerous. Yet, we’re never looking at too much black, making the situation not too hopeless to overcome. This spark of hope conveyed through color tells us that, while problems lie ahead for our main characters, there is a chance that they can fight against it.

Where to Go from Here 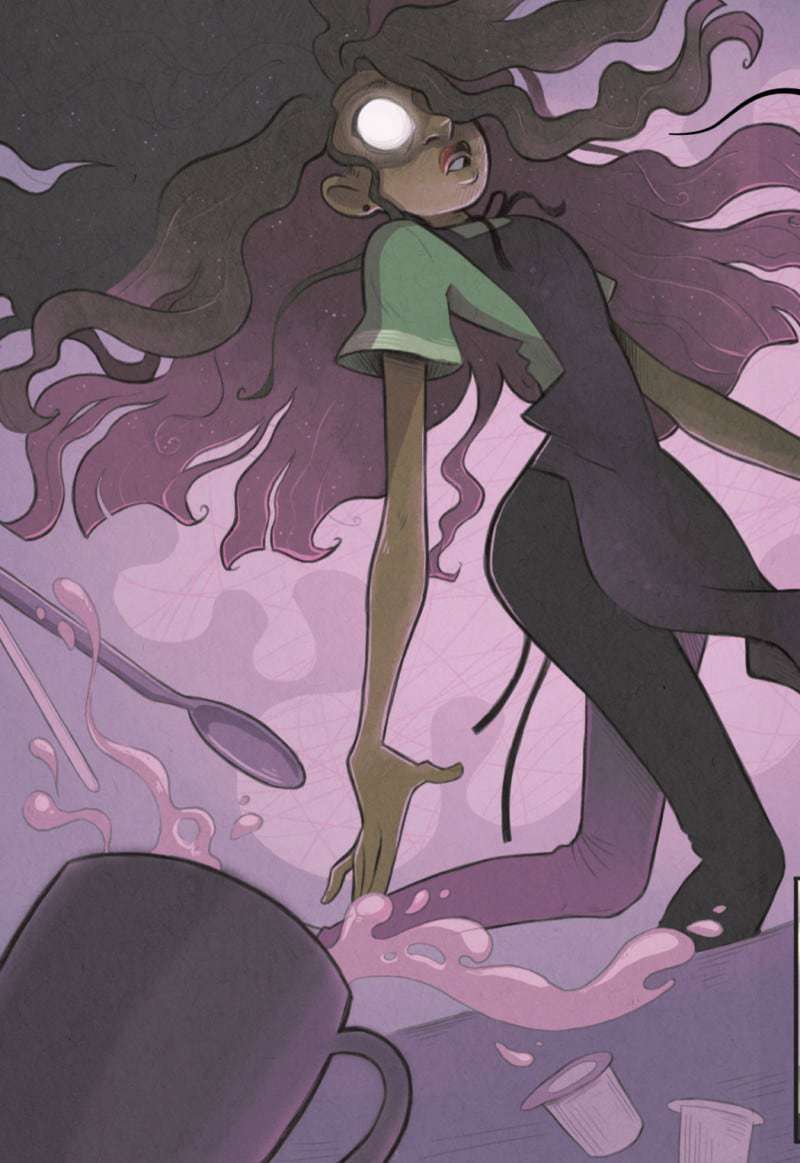 Even with the presented diversity, MOONSTRUCK still had one snag. In the first issue, Chet makes a minor joke referring to gender identity, saying, “My gender identity today is terrible puns. I gotta be me.” In my reading, this appeared problematic, because this comic is so inclusive yet this kind of joke is used by others in real life to undermine the validity of trans people. However, I know there was no ill intent considering that this comic is extremely diverse and well-written. It is important to note that this does not take away the good the things that MOONSTRUCK does show.

MOONSTRUCK Vol. 1, as a mystically mythological comic, is quite magical. The plot draws us in and keeps us there with powerful emotions. The use of the Pleasant Mountain Sisters series to parallel the plot enhances those feelings. The characters have depth in their problems and how they deal with them. They don’t have completely amicable lives and their issues come to light and are acknowledged. This makes the characters all the more real. The illustration presents diverse character designs. We are not limited to human diversity, however. We are given diversity in the non-human characters as well. The coloring also goes to set the mood for MOONSTRUCK Vol. 1. In the end, this comic was a great adventure and a must-read.