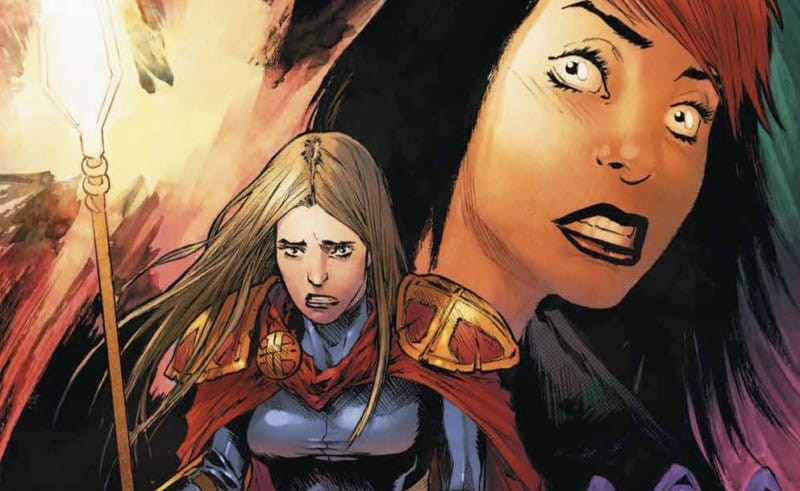 Descended from Jesus and Mary Magdalene, The Magdalena is a warrior who inherits great power and wields her mighty Spear of Destiny (totally not related to DC’S LEGENDS OF TOMORROW) to fight evil. Created in 1998 By Joe Benitez, David Wohl, and Malachy Coney and first appearing as a villain in DARKNESS #15, The Magdalena is now getting her own spin-off series with Image Comics’ MAGDALENA. Now reimagined by Tini Howard, Ryan Cady, and Chris Dibari, MAGDALENA #1 begins a new tale of this holy warrior and her fight against the demons. Does this first issue succeed? Well, let’s just say that I’m intrigued enough to see how things pan out.

READ: We interviewed Matt Hawkins, President of Top Cow. Find out what he had to say on what’s next for the publisher!

The long-time series heroine, Patience, has always been slaying demons as the titular Magdalena with her trusty Spear of Destiny, which imbues her with superpowers such as the ability to self-heal and superhuman strength. However, during a battle with the demon Marchosias, the spear is unable to withstand his power. As a result, Patience is severely wounded and narrowly escapes with her life. Why did the spear seemingly stop working? Enter Maya, a 19-year-old, free-spirited Chicana, the Spear of Destiny’s next wielder. A chance encounter with a guy who turns into a demon leads Patience to meet Maya, and a battle ensues. Soon, Patience realizes she must take on the role of a mentor and train Maya to become the next Magdalena. 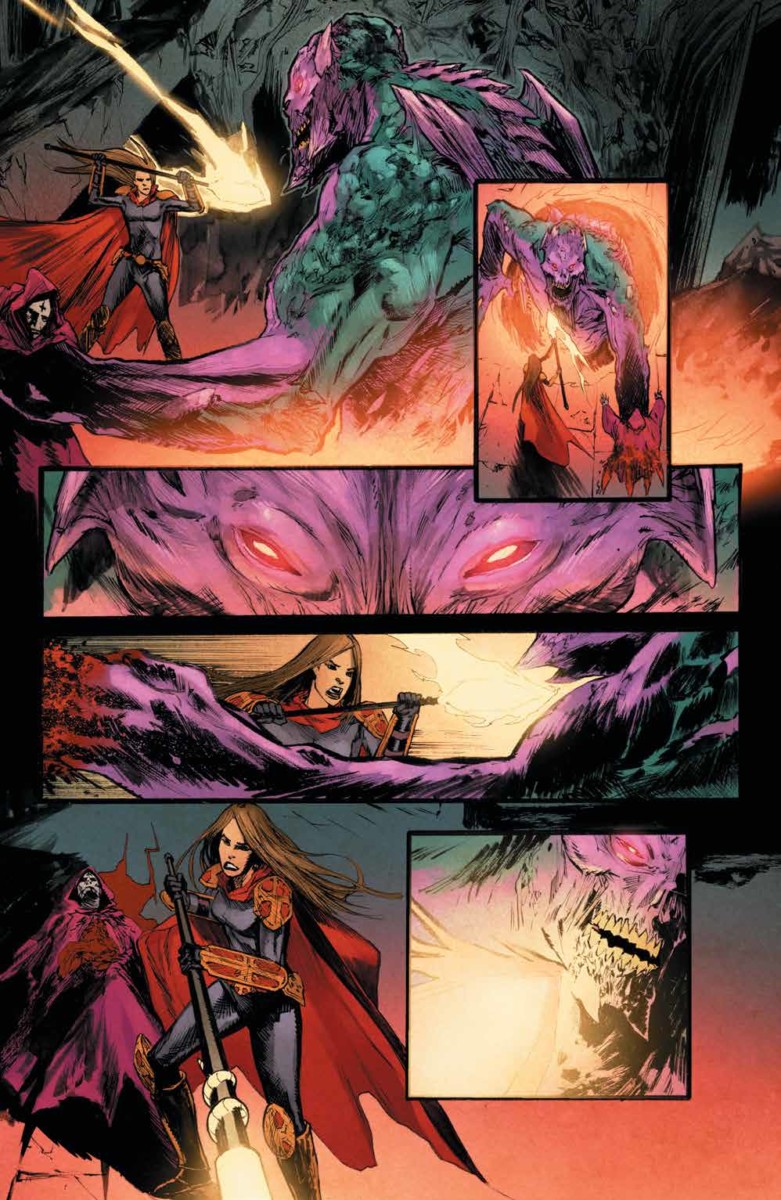 Like many other comics such as NOVA and the MS MARVEL/CAPTAIN MARVEL series, MAGDALENA #1 features a heroine passing the torch to a young, fledgling hero who is a POC. I think this isn’t necessarily a bad thing because more diversity is always a wonderful thing which translates into a bigger audience, so I found myself liking it.  We see a glimpse of Maya’s relationship with her mother who is a devout Catholic and is concerned about Maya’s friend, Shulpa, being a bad influence on her. Maya is more independent and is not devoted to religion like her mother, as reinforced by her goth style and rebellious escapades. Catholicism is a popular religion in Latino culture, so I thought it was funny to see how she weaseled her way out of attending Mass with her mother. We see that at one point Maya starts to incite a prayer in Spanish using salt to encompass herself and Shulpa, which shows that while she may not practice the religion, it’s still a part of her. I think that a Chicana girl who doesn’t seem to be as devoted to her religion as her family is, in a story heavy with religious themes, serves to call into question the more conservative ideologies of Catholicism including messages from the Vatican.

Patience herself is written as a confident but solitary heroine who realizes her mortality, tries to come to terms with retirement, and must now find a new successor. In contrast, Maya is a care-free young woman with a certain joie de vivre, living with her working-class single mother in Anaheim, California. Despite their contrasting personalities, Patience and Maya manage to have a successful working relationship because once they’re together, we get to see how inexperienced Maya is when it comes to fighting demons. It’s also in this scene where we see that Patience accepts that she is no longer the Magdalena. I think Maya can help Patience realize that she is no longer the Magdalena through the course of her training; up until this point, Patience has been the Magdalena for so long that she forgot what it was like to undergo training herself when the Spear of Destiny was passed on to her. On the other hand, Patience can instill a newfound sense of confidence in Maya and help her believe in something that is beyond her understanding. As a result of this relationship, I think both characters will be given a raison d’etre. 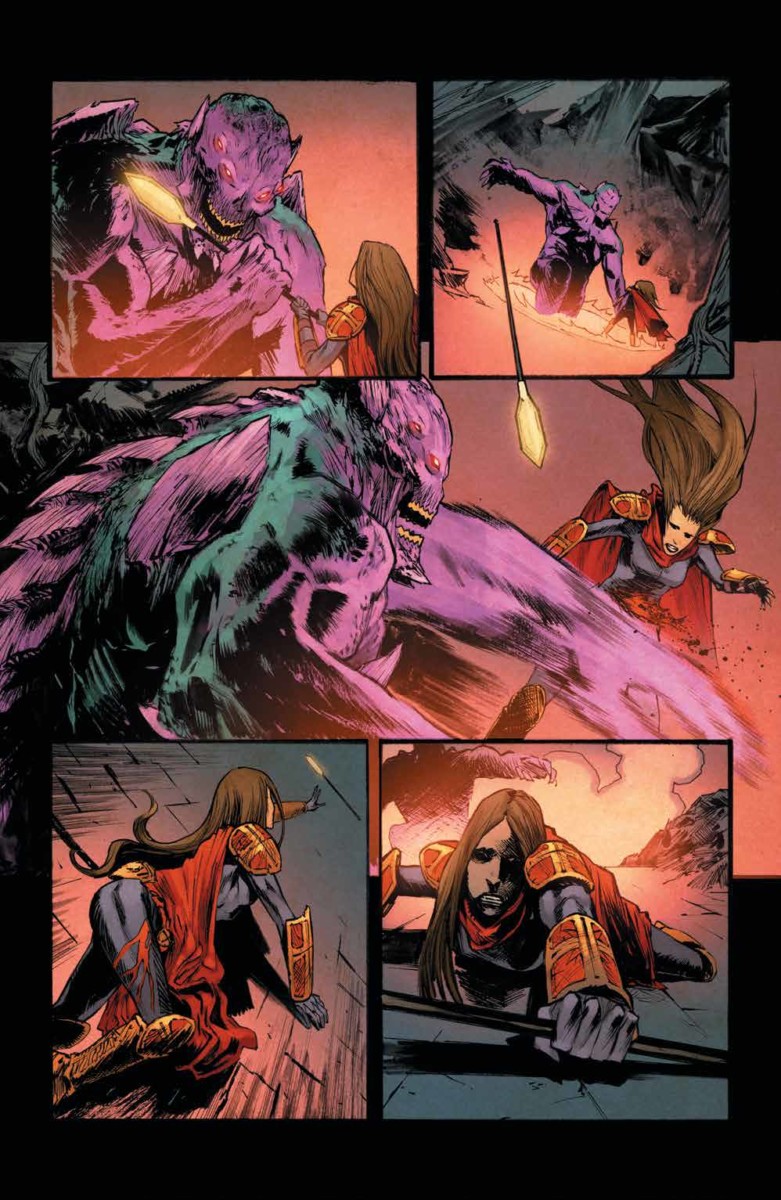 Thankfully, MAGDALENA #1 does not suffer from pacing issues. Howard and Cady waste no time jumping into the action; on the very first page, we are caught right in the middle of Patience’s latest mission. From there, readers are taken through a moment of solace in which Patience tends to her wound while having an existential crisis. We are then introduced to Maya and her mother in Anaheim, California as she heads out with Shulpa to meet with a guy, Greg. From moment to moment there is always something new going on whether it’s Maya jumping into Shulpa’s car or Greg getting kicked out of a goth nightclub. It keeps the reader engaged with all the excitement, and there’s never a moment that feels like it’s been dragged on.

LISTEN: Minority superheroes have been on the rise. We discussed Marvel’s Muslim characters in Episode 88 of our podcast!

Chris Dibari’s penciling masterfully conveys Patience’s emotions through her facial expressions and actions. I particularly love how grotesque and menacing the demons look. I also enjoy some of the transitions, like how the spear leads out of the panel and into the next; it evokes a Will Eisner-esque style of comics. Mike Spicer’s colors do a great job of contrasting Marchosias from Patience’s costume with the use of violet and blues as opposed to earthy tones that demons are traditionally depicted in. There’s one particular page later on in MAGDALENA #1 where his colors evoke a stained glass art motif when Maya wields the Spear of Destiny for the first time. The bright, vivid colors become darker and more muted as they get closer to the foreground. This one-page spread is easily one of my favorites where the colors shine the brightest. 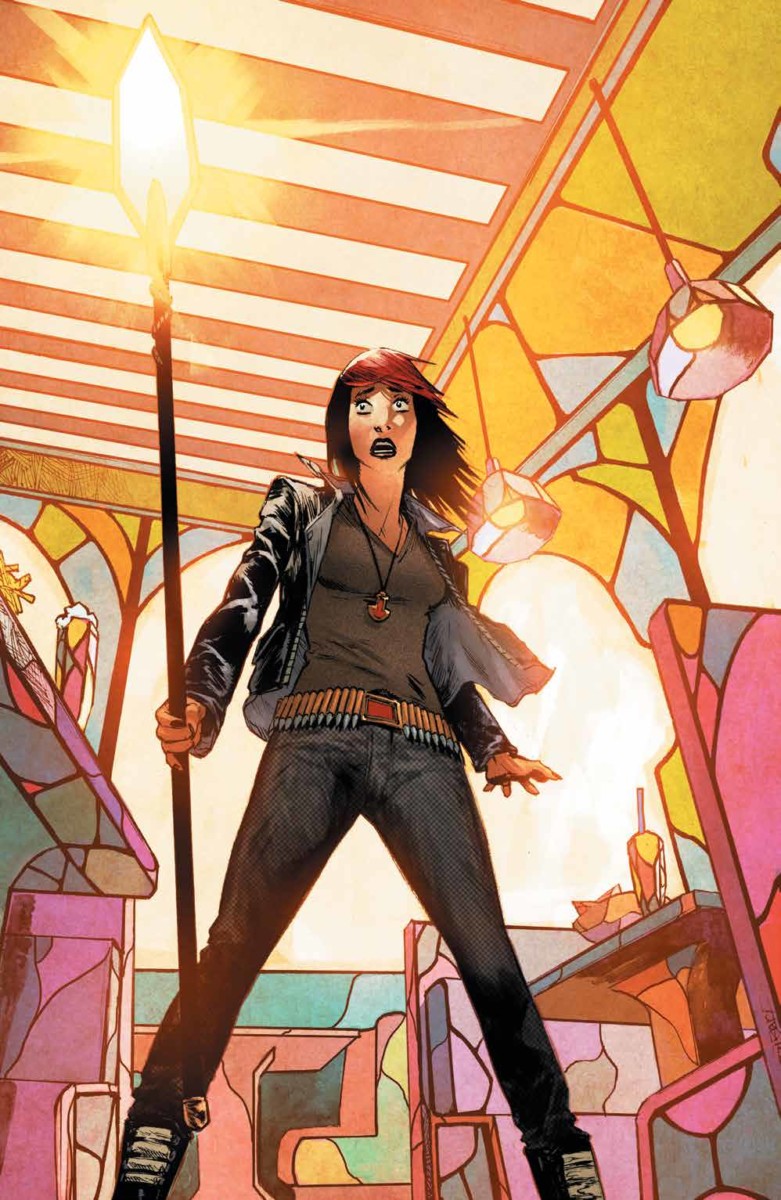 MAGDALENA #1 shows some promise with the next issue aiming to focus on Patience training Maya to become the next Magdalena while hinting at a new villain on the horizon. There’s also some foreshadow with Patience’s inevitable retirement somewhere down the line, which is another thing to look forward to. I’m interested to see how Maya’s relationship with her mother changes as she becomes the Magdalena. I’m also hoping to see if Shulpa becomes Maya’s unwilling sidekick who would be great for some hilarious antics. A Latina lead is exactly what this reboot needs, so grab some salt and pray because this Magdalena is sure to become a hit with both old and new fans.