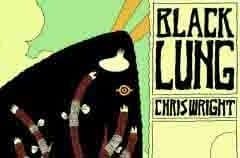 BLACKLUNG, Christ Wright’s first graphic novel, published by Fantagraphics in this just-past year of apocalypse jokes, is intense, desolate, and sort of dares you to chuckle. Wright has developed a cartoonish aesthetic for his homunculi—on a Smith-based spectrum they’re closer to Fone Bone than RASL: simplified facial features, big, clumsy-looking hands, and rounded body parts sewn together with visible stitches, sometimes in patchwork shades, as though these beings were made of remnant felt. They look helpless and formidable at the same time—just like people. 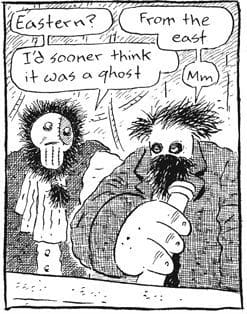 The sea is the setting, and the center of gravity is a single-minded sea captain, and there’s this one whale, so the comparisons to Melville are obvious. In a chapter on Billy Budd, Melville’s last prose piece, in her book Impersonality: Seven Essays, Sharon Cameron follows Melville’s characterizations into atomization. The main protagonists, angelic Billy Budd and naturally deprave John Claggart are described as having personality traits that are undermined, then diffused across existence. They’re given the same qualities as inanimate objects and light, which in turn seem to possess human characteristics. As in Confidence Man and The Encantadas, Melville troubles notions about the boundedness of human beings. Cameron’s argument is that he was influenced by Schopenhauer’s ideas about a universal force: she characterizes this force as “rendering everything in essence like everything else.” This would have been a way to challenge contemporary imperialist and racist suppositions about essentialism: in later Melville, human beings are unstable parts of this essence, no better than Newfoundland dogs or tortoises or rocks, and so no set of beings could lay claim to a position of fixed in a superiority. 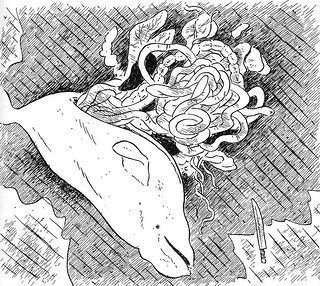 I’ve read a couple interviews with Wright and don’t remember him mentioning Melville as an influence, but, come on. And even if there’s no direct influence it seems that in BLACKLUNG Wright’s found the perfect medium and style for depicting a world in which everything is as animated as everything else. Take for example this panel with a gutted whale aboard a ship: drawn in pen and ink like every other object and being in the world, the rounded innards of a dead animal take on the aspect of live snakes or long fingers. Apart from being silly, or being not-humans, persons in the cartoon medium have the potential to remind us how much we’re a part of our environment, and how every thing that exists has a kind of life of its own. The cartoon human being is waiting for a close analysis, I think.

BLACKLUNG is incredibly violent, but not especially gory. Severed limbs fall off and lie on the ground like autumn leaves—an absence of blood suggesting an absence of essence. And in the plot, there’s no satisfactory answer to most of the ‘why’ questions you might ask, but a force-full environment is clearly presented as an answer to ‘how’ questions: the captain’s childhood shapes his vision, represented as pages of swirling images, and the writer’s time at sea changes his body. This external alteration threatens to steamroll his entire identity: showing, as you, fellow grad students, may well know, the circumstantial nature of his position as a scholar. For a relatively slim volume, the book is pretty heavy. But look, if you’re a ‘toon person who likes Moby Dick, you should pick up BLACKLUNG, and think about how easily we fall apart.

I welcome informed criticism from Melville-maniacs and Schopen-hounds in the comments.