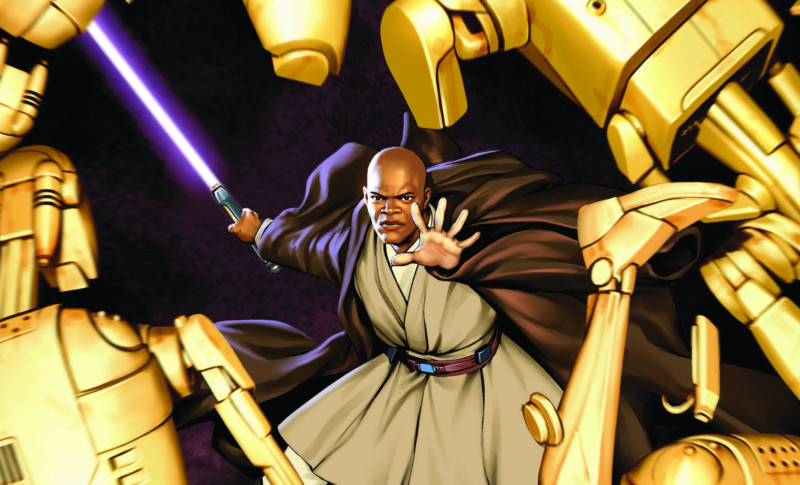 What’s the greatest injustice in the STAR WARS universe? Boba Fett going out like a punk? Darth Maul’s untimely death? Greedo shooting first? None of the above, friends. The answer we were looking for is the death of Mace Windu at the hands of the Emperor! (Sorry to that one person who said “no Dexter Jettster spin-off.”)

Mace Windu had the potential to be one of the coolest Jedi in the galaxy. He was already played by one of the coolest dudes in Hollywood, Samuel L. Jackson. He had a purple lightsaber. And just watch this clip from the original STAR WARS: THE CLONE WARS cartoon and try to tell me it’s not the most badass thing you’ve ever seen. I’ll wait. Even Samuel L. Jackson himself doesn’t believe Mace Windu is dead.

Luckily, someone at Marvel Comics understands that balance must be restored. This August, Mace Windu is back in a brand new mini-series STAR WARS: JEDI OF THE REPUBLIC – MACE WINDU. Now, the new mini-series takes place during the Clone Wars, so the resurrection of Windu will have to wait for another day.

However, the book’s writer, Matt Owens (ELEKTRA), will be putting Windu through a crisis of conscience as he faces the inevitable war across the galaxy. In a press release from Marvel, Owens addressed the difficult choices facing the Jedi warriors in his new series:

“They’re going to have a lot of thoughts about this. Is this really the way to peace? Is this the position I should be taking? Is this really the path the Jedi should be walking down? Doubt is understandable, but what each individual does with that doubt is very telling of who they are and where they will end up.”

Joining Matt Owens on the book for art duties will be Legend with a capital “L” Denys Cowan. You may know Cowan from his various Marvel projects (NIGHTHAWK, CAPTAIN AMERICA/BLACK PANTHER: FLAGS OF OUR FATHERS), or from his work as one of the founders of the Milestone Comics Universe (HARDWARE, STATIC). With this kind of talent, STAR WARS: JEDI OF THE REPUBLIC – MACE WINDU will definitely be a book to watch out for this August.