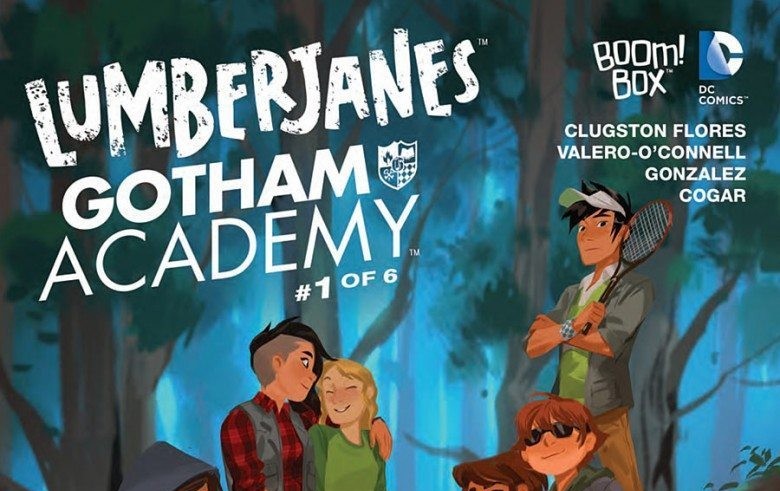 It’s rare in today’s brand/intellectual property-driven comic industry to find an inter-company crossover, especially one featuring characters from one of the big two publishers. It’s even rarer to see one of those crossovers feature cult-favorite niche characters as opposed to iconic super heroes. However DC Comics and Boom Studios have given us all those things with the launch of the six-issue LUMBERJANES/GOTHAM ACADEMY mini-series. The series, written by Chynna Clugston Flores with pencils from Rosemary Valero-O’Connell, teams up the Gotham City private school’s Detective Club with the lead Lumberjanes from Miss Quinzella Thiskwin Penniquiqul Thistle Crumpet’s Camp for Hardcore Lady Types.

READ: Not familiar with GOTHAM ACADEMY? Find out why we love it here!

The issue starts off at Gotham Academy, where Olive Silverlock and Maps Mizoguchi discover that Professor Macpherson has gone missing, her torn apart office hinting that she was abducted. Despite warnings from Headmaster Hammer, the two gather the rest of the Detective Club (Kyle Mizoguchi, Pomeline Fritch, and Colton Rivera) and investigate the room. They find a strange invitation to a party up in the mountains and steal the professor’s car to launch a rescue mission. 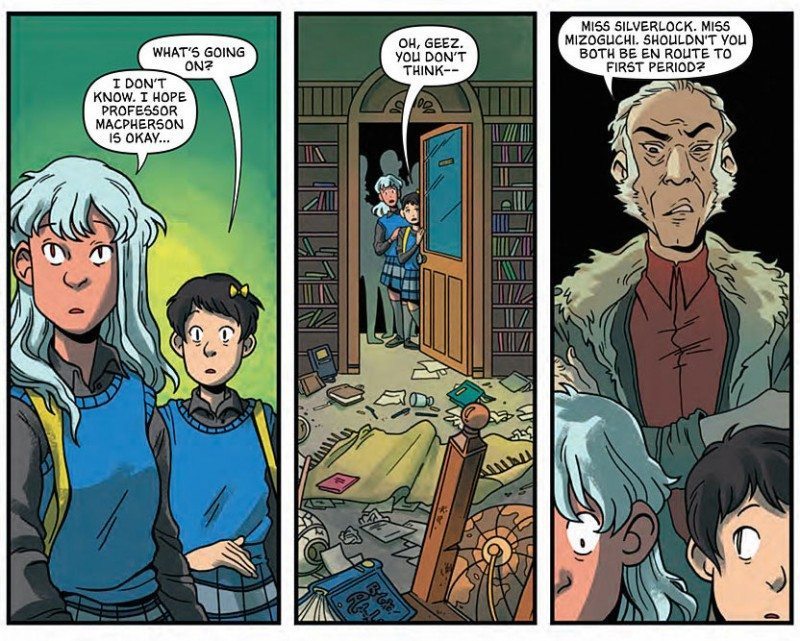 The action shifts to the camp, where uptight scout-leader Jen is freaking out since scout-master Rosie has disappeared. She gathers together Jo, April, Molly, Mal, and Ripley and the group sets out into the woods around the camp to find her. The two groups soon encounter each other while on their respective rescue missions. Their introductions are short-lived however, as they’re attacked by by a force that I won’t spoil. The two groups split-off into intermingled pairs and everyone escapes except for Olive. Jen goes back for her ending the issue on a cliffhanger.

Even though I’m a huge fan of both GOTHAM ACADEMY and LUMBERJANES, I went into the first issue of this mini-series with slight reservation as the respective creative teams from the two books aren’t directly involved. I was worried that the very specific voices of both title’s characters would be lost. However, I’m happy to say that LUMBERJANES/GOTHAM ACADEMY #1 more than lives up to the comics it’s spawned from. For starters, I like that there’s no dimension-hopping rigmarole to explain the crossover. The characters simply exist in the same universe for this story and that’s that, which is a refreshing change of pace for a crossover. 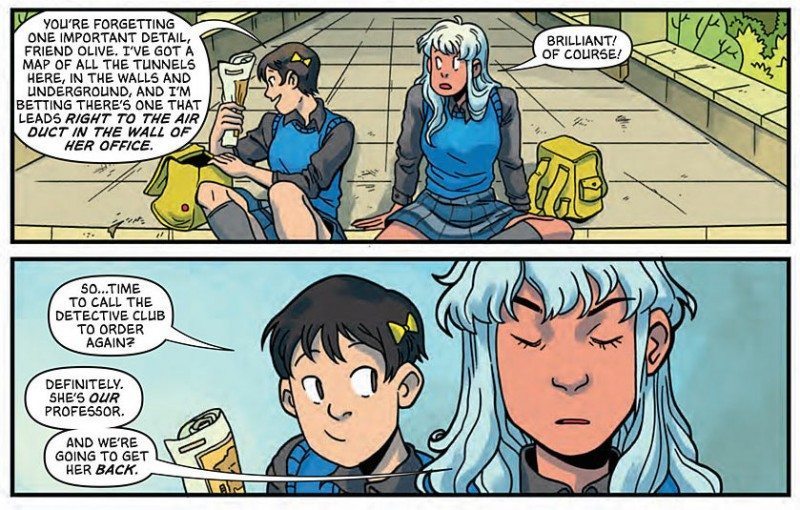 The issue does start off a bit slow, as the set-up scenes that set up the respective disappearances of Professor Macpherson and Rosie plodded a bit. They weren’t bad per say, but they read a bit like fan-fiction with the characters spouting a great deal of exposition about who they are. That’s said, the minute references to previous events in both series show just how much research the creative team did in preparation for the crossover.

READ: Catch up on our latest LUMBERJANES review here!

The story really picks up at about the halfway point when the two groups meet up. The characterization work from Clugston Flores is top-notch. The interactions are all pitch perfect, with the various cast members’ personalities bouncing off each other perfectly. My particular favorite moments are between uptight, somewhat by-the-book Jen and the always rebellious Pomeline. The team-up of the ever-enthusiastic LUMBERJANES’ Ripley and GOTHAM ACADEMY’s Maps is also particularly inspired. 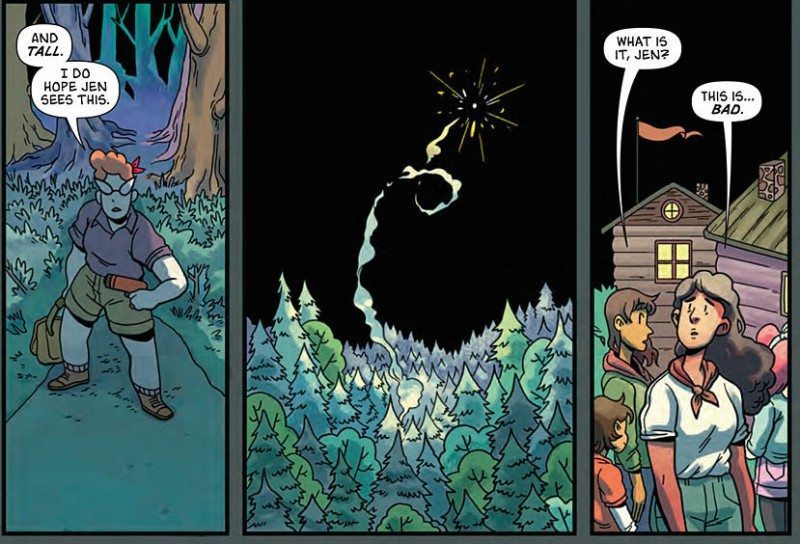 I liked the art from Valero-O’Connel, along with inker Maddi Gonzalez and Whitney Cogar, a great deal. It’s punchy and energetic, really capturing the feel of the book. It’s much closer to the usual LUMBERJANES style than GOTHAM ACADEMY, so the characters from the former series look more on model than those of the latter. However, I don’t have an issue with this since a majority of the issue takes place at the Penniquiqul Camp.

LUMBERJANES/GOTHAM ACADEMY #1 is a really fun ride. Fans of either series will enjoy it a great deal as it stays true to both sets of characters while organically putting them on adventure together. That said, knowledge of those titles isn’t required to read it, and I would recommend it to anyone who enjoys fun, character-driven stories.