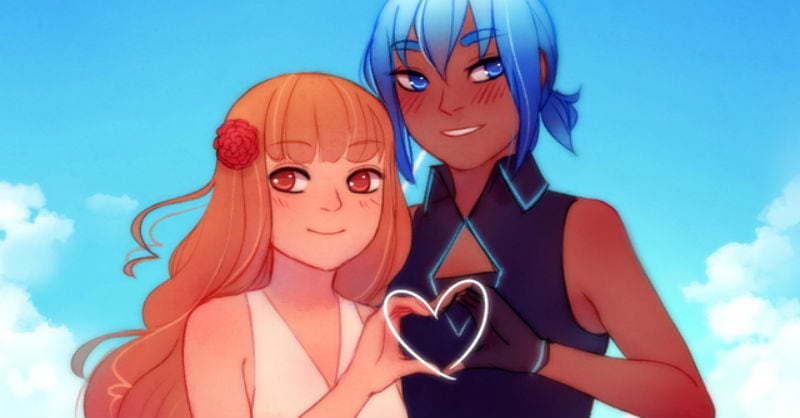 In our technological age, the web has become a welcoming platform for independent comic creators to showcase their work and gain a readership. Among the benefits of posting original work online is the opportunity for sole control over one’s creative property, which allows for inclusive, uncensored content. This allows creators to delve into issues related to the LGBTQIA+ community.

Here is a list of ten amazing LGBTQIA+ webcomics to check out:

Written and drawn by David Willis, DUMBING OF AGE is an online comic focusing on a unique set of characters attending Indiana University. Various adventures and squabbles ensue.

DUMBING OF AGE is a brilliant and funny coming-of-age story, delving into the silliness and terror of learning who you are and gaining a community of friends and allies. Despite its general comedic tone, the comic fluidly delves into serious issues, such as mental illness, sexual assault, parental abuse, homophobia, and more. It also features a diverse cast of characters of varying sexual orientations and gender identities, demonstrating the author’s respect for the LGBTQIA+ community with each character’s complex and multifaceted representation.

DUMBING OF AGE is currently ongoing, with new posts seven days a week.

Created by Jocelyn Samara DiDomenick, RAIN LGBT focuses on Rain Flaherty, a transgender girl who tries to live under the radar at her conservative high school, and the friends she makes along the way.

First of all, the author’s art style leans towards chibi, with its simple lines and adorable facial expressions, adding to the adorable, comedic tone of the comic. Furthermore, storylines themselves range from laugh-out-loud funny to deeply thoughtful, invoking serious conversations about the struggles non-heterosexual and non-cisgender people face daily. Though lacking in racial diversity (the story later features Latinx and Chinese-American characters in major supporting roles), the webcomic features a wide range of genders and sexualities, showcasing the incredible diversity and fluidity within the queer community.

Warning: the webcomic does delve into potentially triggering topics such as gender dysphoria, transphobia, homophobia, etc.

Created by Suzana Harcum and Owen White, TRIPPING OVER YOU is the coming-of-age love story between Milo Dunstan and Liam Schwartz, who start off as acquaintances at the same boarding school where their friendship deepens into love.

The story focuses on the entertaining character dynamics between two very different people: the anxious, introverted Liam and the outgoing, aspiring thespian/dancer Milo. Within the comic, the characters establish a connection that transcends their differences; a relationship based on trust and mutual affection. Their relationship, intertwined with snark, humor, and warmth, creates a story of developing sexuality, while also addressing issues found in a queer relationship, such as homophobia, alienation within family, sexual intimacy, consent, and more.

TRIPPING OVER YOU is currently ongoing and updates Monday and Friday.

READ: For more LGBTQ+ goodness, check out our take on PATSY WALKER, A.K.A HELLCAT!

Set in a futuristic metropolis where individuals use an advanced technology called “Mods” to alter their appearances and receive genetic advantages, ALWAYS HUMAN is a sweet sci-fi, same-sex love story. Created by web artist Ari, or walkingnorth, main character Sunati becomes captivated by this strange, but beautiful girl named Austen, who doesn’t seem to use Mods at all.

ALWAYS HUMAN is stunning, flowing with bright colors and gorgeous character designs that portray each of the quirks and individual personalities of the characters. Aside from being an LGBTQIA+ comic, it also discusses disability and ableism. At the beginning of the series, Sunati unintentionally admires Austen for the wrong reasons, finding Austen’s immunodeficiency “inspirational.” The author skillfully deconstructs this Inspiration Porn trope, by having the two characters recognize each other as multifaceted human beings with different vulnerabilities and strengths. The comic not only features a well-developed same-sex story between an interracial couple but also features other LGBTQIA+ characters, such as Rae, Sunati’s aromantic-asexual best friend, as well as Austen’s own family, which includes her dads and non-binary sibling.

ALWAYS HUMAN is currently ongoing and updates every Saturday.

ROCK AND RIOT (otherwise known as what the movie GREASE should have been) is a webcomic featuring diversity and love in all its forms, shapes, and colors. Imagine a 1950s high school drama between two rival racially and sexually diverse gangs. Created by Chelsey Furedi, ROCK AND RIOT focuses on the hilarious rivalry between the Jaquettes and the Rollers.

The story’s main appeal is found in the incredible relationships that develop, both romantic and platonic. The central romance in the comics takes place between Jaquettes leader Connie, whose bold and brash persona turns achingly adorable in the presence of her girlfriend Carla, a classmate and waitress. Aside from Connie and Carla, the author portrays a diverse range of romances and gender identities, including featuring a gang made up of non-binary members. Featuring lovely art, funny story lines, queer representation, body positivity, and POC characters, ROCK AND RIOT is a comic that can’t be missed!

ROCK AND RIOT is ongoing and updates every Tuesday and Friday. 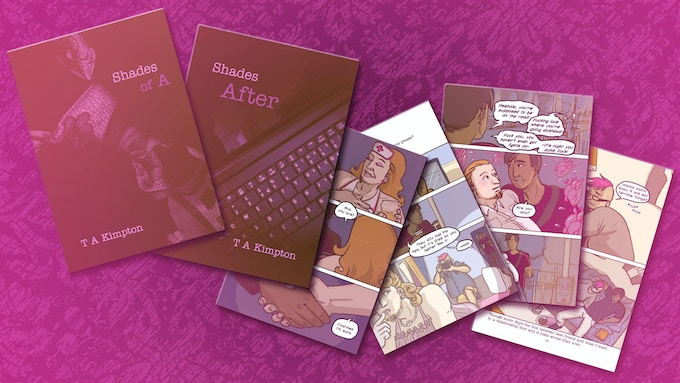 SHADES OF A, created by Tab Kimpton, revolves around Anwar, otherwise known as War, a prominent asexual blogger, searching for love. Imagine being asexual in a world obsessed with sex, when all you want is for someone to share cuddles and discuss DOCTOR WHO with. Meet Anwar, a Muslim-British English major who’s (mostly) recovering from a broken heart, who one day gets dragged into a kink club by a friend and finds someone he’d never expect to fall for.

SHADES OF A is completed and available at Kimpton’s website, Discord Comics.

READ: Want to see more bisexual characters in webcomics? We think you should be reading MONSTERPOP!

7) THE LESS THAN EPIC ADVENTURES OF TJ AND AMAL

Created by E.K. Weaver, THE LESS THAN EPIC ADVENTURES OF TJ AND AMAL features an unusual love story that includes gasoline, diner food, and an incredibly high-stakes road trip. What does one do after calling off their wedding, coming out to their conservative parents, and having no idea what to do with one’s life? Go on a cross-country road trip with a semi-stranger, obviously! That’s what Amal does when he shares a car ride with goofy vagabond TJ, in order to attend his sister’s college graduation. The two are hurled into adventures Amal would never have expected.

Weaver has won several awards for this comic, including a Harvey and Lambda award, as well as an Eisner nomination, and after reading this comic, it’s clear why. With attractive artwork, complex characterization, and incredible queer representation, TJ AND AMAL focuses on the relationship between Amal, a gay Indian-American medical student, and TJ, a white polysexual drifter, who while on the road find themselves establishing an incredibly strong connection that had never expected. The comic is an amazing testament to good LGBTQAI+ representation, featuring intersectional characters, sex positivity, and engaging storylines that instantly capture the reader’s attention.

THE LESS THAN EPIC ADVENTURES OF TJ AND AMAL is completed and available here.

So, you live in a beautiful, futuristic plant-based society where touch has become an outdated concept, and physical pleasure is found only with machines. Now imagine a literal collision with a handsome stranger, and suddenly wondering about the benefits of human contact. In Gina Briggs’ LOVE NOT FOUND, Abeille, an employee at Eyebright Industries, experiences this and becomes curious, deciding to experiment with human touch with the said handsome stranger, fellow employee/botanist, Miel.

Briggs provides an adorable sci-fi romance, exploring how important the idea of touch is for emotional and physical connection. Sexuality and gender identity are free and open concepts in this world, so no character experiences prejudice regarding who they’re attracted to or what their gender identity is. Abeille herself displays an open interest in men and women, and a major non-binary character is introduced as the comic continues. Cute note: Abeille means “bee” in French while Miel means “honey.”

LOVE NOT FOUND is currently updating Mondays, Wednesdays, and Fridays.

READ: Love video games? Find out who we think are the best LGBTQIA+ characters in gaming!

Generated by the webcomic team Christian Beranek, Kelci Crawford, and Nick Beranek, VALIDATION is a story of, well, validation. Ally, a transgender woman who lives her life pursuing the things she loves, tries to affirm her day-to-day existence while hanging out with her friends and absorbing geek culture.

The characterization in this comic is pretty great, as the protagonist, Ally, is incredibly adorable, refreshingly honest, loving, and entirely enthusiastic about cartoons, gaming, dinosaurs, and representation in comics. (She is also someone who would be perfect writing for ComicsVerse!) The creators also create a great supporting cast, such as Roxie, one of Ally’s best friends, a fellow trans woman, and musician whose humor and punk-rock edge bring even more vitality to the comic. The comic focuses on the nuances of Ally’s daily life, infusing her story with humor, vulnerability, and allies. The webcomic delves into important points about the comic book industry, touching upon issues such as industry sexism, stereotypical representations, and the privilege of white, male creators.

VALIDATION updates every Monday and Thursday.

Created by Tatiana Fiermonte, WATERLILY is a beautifully drawn one-shot comic exploring the memories and feelings of young transgirl Lily, who finally wants to return to the water after years of evading it due to her gender dysphoria. One day Lily decides to go to the beach to try swimming again, and along the way remembers her life before her transition and how her life and body have changed since.

Though this comic is a one-shot, the impact is no less heavy-hitting, exploring the vulnerabilities of a young woman still insecure about her body and the strength she gives herself to push past them. The comic also features her no-nonsense girlfriend, Rosa, who helps Lily through her insecurities and with whom Lily shares a mutually adoring relationship.

WATERLILY is completed and can be found online.