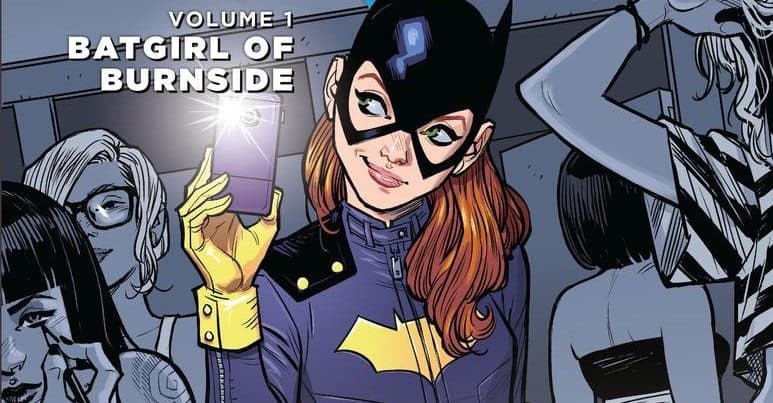 In news that will come as no suspire to anyone who reads my work regularly here at Comicsverse, I love the character of Batgirl. I’ve reviewed every issue of BATGIRL that’s come out in my four months here, reviewed the hardcover collection of the preceding story-arc, interviewed BATGIRL co-writer Brenden Fletcher, and even co-hosted a podcast dedicated to the first “Batgirl of Burnside” hardcover collection. Suffice to say, I’m a big Barbara Gordon fan, be it as Batgirl or Oracle, and this past week has been quite hard due to the passing of TV’s first Batgirl Yvonne Craig. This isn’t a tribute piece to Ms. Craig specifically, but rather a celebration of what I love about the Barbara Gordon character.

Check out our tribute to YVONNE CRAIG!

Appropriately enough, my first exposure to Barbara Gordon/Batgirl was through Yvonne Craig’s portrayal on the 1966 BATMAN television series. Even though I was probably two or three ears old at the time, I vividly remember being transfixed. Ms. Craig’s Batgirl was a cool, and quite frankly badass character. She was presented as a whip-smart librarian who more than held her own next to Batman and Robin a majority of the time. And then of course there’s the costume. The bright yellows and chrome-shiny purples of the show’s Batgirl outfit burned themselves into my brain, and it’s a look I still love today. In fact one of my  many favorite things about Babs Tarr’s beautiful BATGIRL art are the cues taken from it.

My next exposure to the character, and the one that really cemented my fandom, was her portrayal on Fox’s BATMAN THE ANIMATED SERIES. Like many people my age, BATMAN: THE ANIMATED SERIES defined my thoughts on the entire Bat-Mythos, and continues to even to this day. The show slowly integrated Barbara into it’s storyline, first introducing her solely as Commissioner Gordon’s daughter in the two-part “Heart of Steel”, where she uses her wits to rescue her father from evil robots. She eventually becomes Batgirl in the two-part “Shadow of the Bat” episode, and appears once more in the series original run in an episode entitled “Batgirl Returns”, a personal favorite of mine due to the interactions she has with my other favorite Bat-Character Dick Grayson (If it wasn’t obvious, sidekicks are my thing).  Check out this storyboard!

I adored Batgirl’s animated appearances,   and would anxiously hope one of them was the episode being repeated on Fox each afternoon. I also vividly recall being overjoyed at receiving a Batgirl figurine from McDonalds as now I could finally play with her along with my multiple Batmen and Robins.  (Toy-makers then, just like now, operated under the dumb-as-dirt conceit that boys wouldn’t play with action figures of female characters, an idea I find so absurd that it deserves and will receive its own article from me in the near future.)

Check Out Our Podcast Episode Dedicated To BATGIRL OF BURNSIDE: VOLUME 1

I first began seriously getting into comic books around the age of eight, and obviously Barbara Gordon was one of the first characters I looked into. Of course, I was shocked to learn that she had been crippled by The Joker years earlier and now functioned as Batman’s information broker. While I would eventually come to love the Oracle character, I was initially disheartened. I was a bit too young to understand how Barbara overcoming a disability was inspiring to so many people, and instead was just angry that DC had crippled he kick-ass Batgirl character I loved. To this day, I actually despise “The Killing Joke” and what happens to Barbara in it, even though later writers took the terrible concept and turned it into something great. I avoided reading BIRDS OF PREY at the time for this reason, though I did read and adore Scott Beatty and Chuck Dixon’s early 2000’s BATGIRL: YEAR ONE mini-series, and still feel it’s a very underrated book.

It took a few more years until I really fell in love with the Oracle persona, and quite frankly it took Gail Simone. I didn’t hop onto to her BIRDS OF PREY run until it was about halfway over, but once I did I devoured it. Simone’s Barbara was somehow even more kick-ass as Oracle than she had seemingly ever been as Batgirl. She was also a character who wasn’t defined by something wrong with her, but rather someone who lived through it and persevered. While I never suffered anything near the trauma of being shot and physically paralyzed, I was a somewhat depressed, often bullied child who didn’t fit in due to being overweight and a bit socially awkward and I took great solace and inspiration from Simone’s Barbara, and still do to this day.

Check Out Brian’s Review Of Batgirl Of Burnside Volume 1 Here.

When the New 52 reboot was announced I was a bit wary of Barbara returning to the Batgirl roll, as I’d really come all the way around to loving her as Oracle. However I had full trust in Gail Simone. For the most part, that trust was rewarded. The first year or so of BATGIRL was some of the best stuff to come out of the New 52’s first year. I must admit though that the series began to lose me after a while. It wasn’t Simone’s fault, as much as it was the constant Bat-Family crossovers (I’m actually not a big fan of the man himself, just his sidekicks) and the book’s editorially mandated dark tone. I also began to feel that Barbara was being portrayed as a bit too old for the young 20-something the New 52 timeline placed her at, and as much as I liked what Gail had done, I wished DC would have let her start completely fresh as Batgirl. I ended up dropping the book, and all my other DC books somewhere around issue 20 of the series. (I have since read the arcs I missed and enjoyed them.)

When news of the Cameron Stewart/Brenden Fletcher/Babs Tarr soft-reboot broke in the summer of 2014, I was very cautious. While the series seemed to be addressing the age issues I’d had with the last run and I adored the costume and “selfie” cover, I was wary of DC turning Barbara into a Poochie-like “hip” character who would spout catchphrases and such. I didn’t even read the first issue when it hit shops. In fact, I didn’t read it until the 2014 New York Comic Con when I picked up an NYCC Variant Sketch cover and read it while waiting in-line for a panel . I was immediately transfixed. Stewart and Fletcher wrote Barbara as a normal 20-something in the year 2014. In fact she reminded me quite a bit of myself and my friends, and some of the situations she found herself in at parties and such were ones I could very specifically relate to. Then there was the gorgeous art of Babs Tarr (over layouts by Stewart), with its animated style and the new Craig-inspired modernized Batgirl costume. I was hooked from that first issue, and have been ever since.

The character of Barbara Gordon, be it the 60’s live action Yvonne Craig, the Animated Series incarnation, Gail Simone’s kick-ass version of Oracle, or the Stewart/Fletcher/Tarr reboot has had a huge impact on my life, and I an honestly say I probably wouldn’t be writing for Comicsverse without her.