The gang may have to confront something much scarier than real monsters. Their feelings. In SCOOBY APOCALYPSE #24, J.M. DeMatteis and Keith Giffen have written a story that digs deep into these beloved characters and their love lives. Can a little romance help the gang survive in a monster-filled, apocalyptic world?

Will Daphne and Fred finally, finally, get together? Is there a new relationship on the horizon for two other team members? Read SCOOBY APOCALYPSE #24 and find out, you won’t be disappointed!

A Fight For Survival in SCOOBY APOCALYPSE #24

Within the thoroughly barricaded mall, the gang has sealed off all the access points in their newly hideout. Their main priority is securing the base. While there’s no fighting with monsters in SCOOBY APOCALYPSE #24, the team does fight amongst themselves.

With the gang divided, they try to agree on the best course of action for survival. Every action must be calculated in order to stay alive. When they argue with one another, you can feel the tension between them, and how every decision they make holds a considerable weight. In this issue, it’s more about the emotional side of living in a monster-filled world.

In SCOOBY APOCALYPSE #24, the focus is on the relationships between the characters. Daisy has this great monologue about the importance of family, especially during the apocalypse. Fred and Daphne’s bond is put in the spotlight in this issue. Fred reflects on their time together and how his love has never been returned.

There’s a flashback to when they were filming Daphne’s show. Another instance when Fred’s proposal was rejected by her. To me, these short memories seem unnecessary to the overall plot. With his newfound confidence, Fred refuses to be a hopeless lovesick puppy any longer.

When Fred and Daphne go on reconnaissance, he lays his heart on the line, one last time. 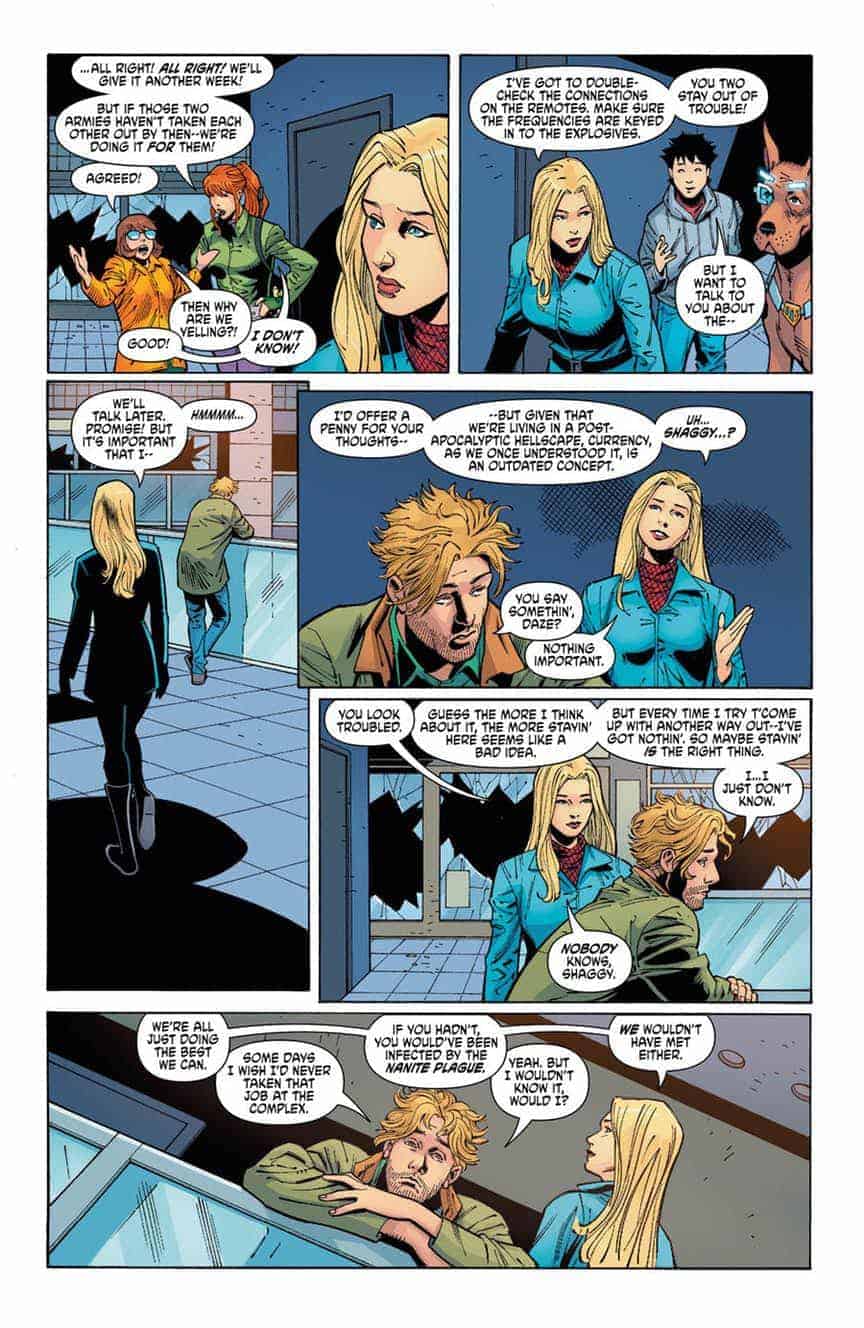 Fred and Daphne aren’t the only ones feeling the love. There’s a sweet, budding romance between Daisy and Shaggy. Their relationship is sweet, and both have yet to muster up the courage to act on their crushes. After her failed marriage, Daisy stresses the importance of family and, more specifically, how important Shaggy is to her. In the team, she’s like the glue that keeps everyone together.

If you want to read about the gang fighting tooth and nail against gruesome monsters, you won’t find that in SCOOBY APOCALYPSE #24. There are monsters, and the gang fighting each other, but that’s about it. That’s not necessarily a bad thing. This comic is more about the physiological and emotional side of living in an apocalyptic world. The team is more focused on their plans for survival at this point. And for some in the gang, their focus is also on their love interests. 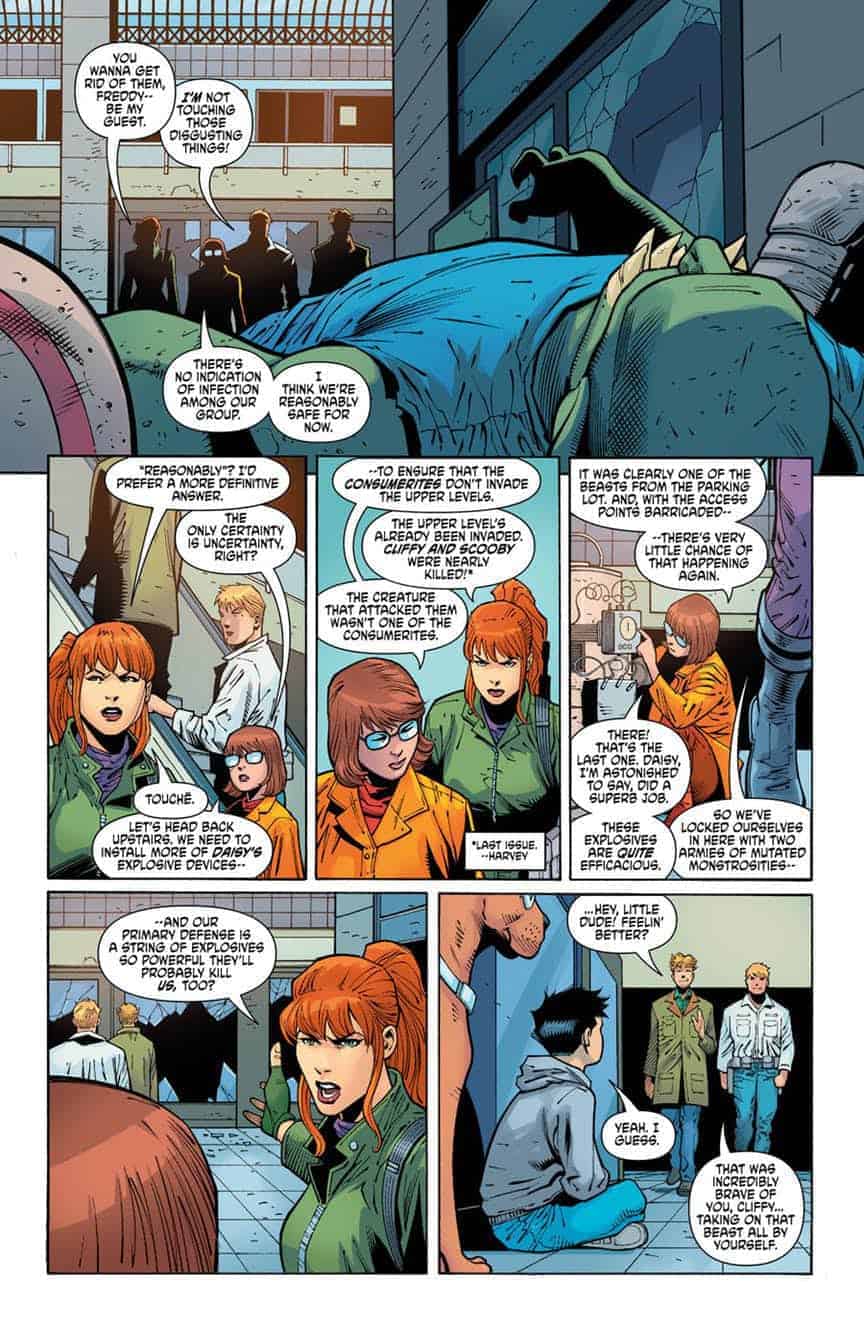 Regarding the art style, there’s not much in SCOOBY APOCALYPSE #24 that made me say “Wow!” Although the setting descriptions and the depictions of monsters are well done, the artwork falls a bit short for me. The character’s expressions never seem to change.

Also, there’s a harsh contrast between shadow and light. For example, in the panels where Fred is sitting by himself, thinking of Daphne, it’s too dark.  However, the imagery does capture the tension between the characters as well as the atmosphere. Overall, the artwork by Ron Wagner is good. Not great, but good.

Fred and Daphne: End of the World Engagement?

At the center of SCOOBY APOCALYPSE #24 is love (or unrequited love). In this comic, Fred does a lot of thinking about his relationship with Daphne. How he feels like a “lovesick puppy” that will never have his affections returned. His feelings of rejection when she never commits to any romantic relationship nor accepts his many marriage proposals are heartbreaking.

With encouragement from Velma, which is a surprise, he confronts Daphne about his affection for her and gives her one last ultimatum. One last marriage proposal. Does she say yes, finally? Is it an end of the world engagement? You’ll have to read to find out!

SCOOBY APOCALYPSE #24 is a solid issue. While there’s no bloody brawl with monsters, there is a real sense of growth in the gang. J.M. DeMatteis and Keith Giffen have hooked me on a story about blossoming relationships in an apocalyptic world. I look forward to watching these relationships develop further, for better or worse.