LOOSE ENDS #1 and #2 are violent, dirty and unapologetic looks on American Southern life. The first two issues feel like a road trip through an old, dusty Alabama back road: some of it is pretty, some of it is disturbing, and sometimes you feel like you are on a different planet. LOOSE ENDS is a gorgeous, frantic and mesmerizing pulp saga that exposes the guts and grace of the Southern United States.

This “4 Issue Southern Crime Romance” tells the story of Sonny Gibson, a Redneck on the run from criminals and cops. Writer Jason Latour and artist Chris Brunner are no strangers to the gritty, Southern slow burn, having worked together on the SOUTHERN BASTARDS series. Now they are exploring a different subset of the South through LOOSE ENDS and are joined by SPIDER-GWEN and SQUIRREL GIRL colorist Rico Renzi.

The first issue begins with Sonny in the middle of a ROAD HOUSE-esque, Southern Dive Bar brawl and the story only shoots off from there.  Latour propels the story by constantly switching up which character we are following; besides Sonny, we are introduced to crooked cops, dope dealers, and murderous gangs. We also meet Cheri, a bar waitress on the lamb with Sonny, with whom he shares a subtle and intriguing romance. The story of Sonny Gibson’s escape is punctuated with flashbacks and flash sideways from other mysterious characters that unexpectedly interconnect.

Despite the short amount of time we spend with each character and the lack of backstory, Latour manages to keep it all to a sluggish sizzle, thanks to his ability to speak volumes in a few short lines of dialogue. The first two issues are primarily set-up for the eventual confrontation between Sonny and his pursuers, so the action is drawn out. In addition, a mysterious connection between the characters acts as the driving force of the story in the first two issues. Hopefully, Latour will be able to transition the slow reveals and sparse dialogue into a worthwhile payoff. 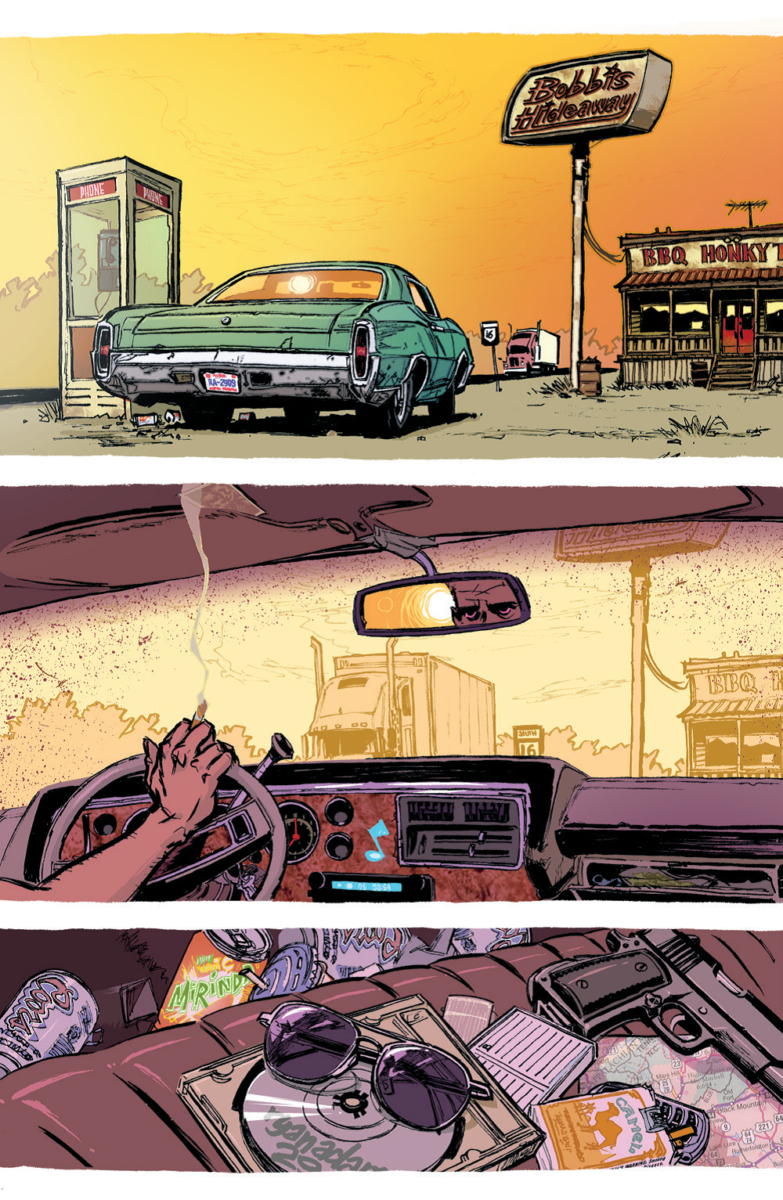 Like the plot, the characters are messy and scattered in the best way. Everyone we meet in LOOSE ENDS is either erratic, violent, or drunk.  Even the speech bubbles are frazzled and scratched out to convey phonetic Southern accents.  However, these characters are not typical Southern stereotypes. They are fleshed out and empathetic, if not a little bit pathetic. In LOOSE ENDS #2, we get a peek into Cheri and Sonny’s past in a few short panels,  and all the scattered glimpses we have seen of their relationship starts to click together.

Together, Brunner and Renzi have created one of the most beautiful comics in a long time. Despite the violent and unsightly subject matter, every panel is detailed in vibrant Technicolor. Like the story, all of the images in the book are jumbled and dizzying: the bars are smoky and falling apart, and the roads are dusty and winding. Candy wrappers, beer cans, and chipped paint are staples of this universe. Every image is like taking a perfect snapshot in the middle of a tornado, and the world of this comic feels worn out and bursts at the seams. Brunner’s figures are never static, and their faces are always mean-mugging or twisted. Brunner’s slightly cartoony style perfectly captures the manic tone in every panel. No one ever looks like they are standing still.

Every page has a distinct sense of place, and no two are alike. The Jackson Pollock of comics- this team has mastered controlled chaos. Each scene and location feature a swirled or splattered layout that perfectly captures the turbulent pace. Thanks to Renzi’s masterful coloring, LOOSE ENDS can shift between elegance and grit without a hiccup. A high school kegger gets a nostalgic, orange hue like an old worn photograph, a big city is filled with dark blues and deep, gooey neon lights, and a run-down, redneck bar features the same warm, hometown reds as in SOUTHERN BASTARDS.

LOOSE ENDS #1 and #2 are fantastic glimpses into the world of the deep South and are unbelievably expressive works of art. The comic book exploration of this region in SOUTHERN BASTARDS has dove even deeper. Somehow, despite the influx of genius Southern-fried pop culture that is dominating our lives (e.g. THE WALKING DEAD, BAD AND BOUJEE), this comic manages to carve out its own mangled, boozy space.