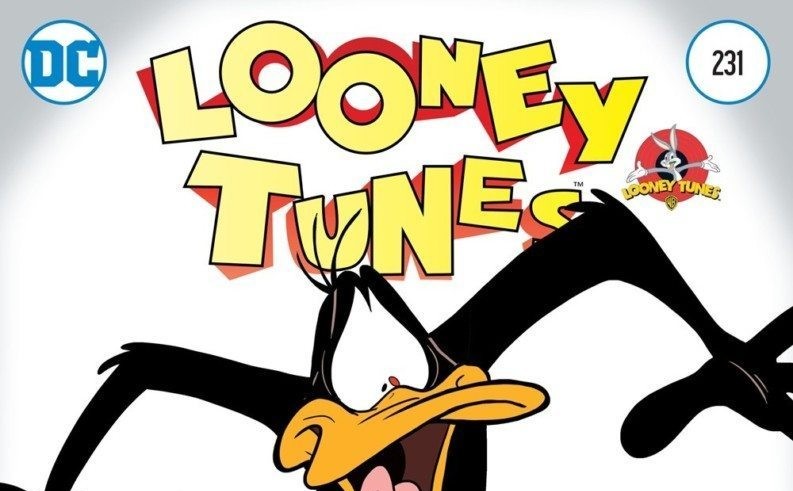 LOONEY TUNES #231 is a comic to relive your childhood. Daffy Duck’s presence fills most of the panels, excluding the mini-story “Mama’s Boid,” and his antics often get him into screwy situations. For those who love Bugs Bunny, fear not: He’s outwitting Daffy and Beaky Buzzard throughout. Basically, the book is an escape from reality. The obnoxious silliness and cartoonish violence occur in a world where the only crime is contorting the human face to smile, even amongst all the muck that circles humanity. Having the smart-ass Daffy jaw at us and the Looney Tune gang is a blessing that packs a delightful TNT punch.

Issue #231 has four stories jammed into it. Bill Matheny wrote “Duckier Amuckier,” “Mama’s Boid,” and “Whine and Dine Parts 1 & 2” which David Alvarez drew, while Frank Strom and Howard Simpson took on “So You Want A Million Bucks, Eh?” All resemble the mischief and hoodwinking that glued you to the television. 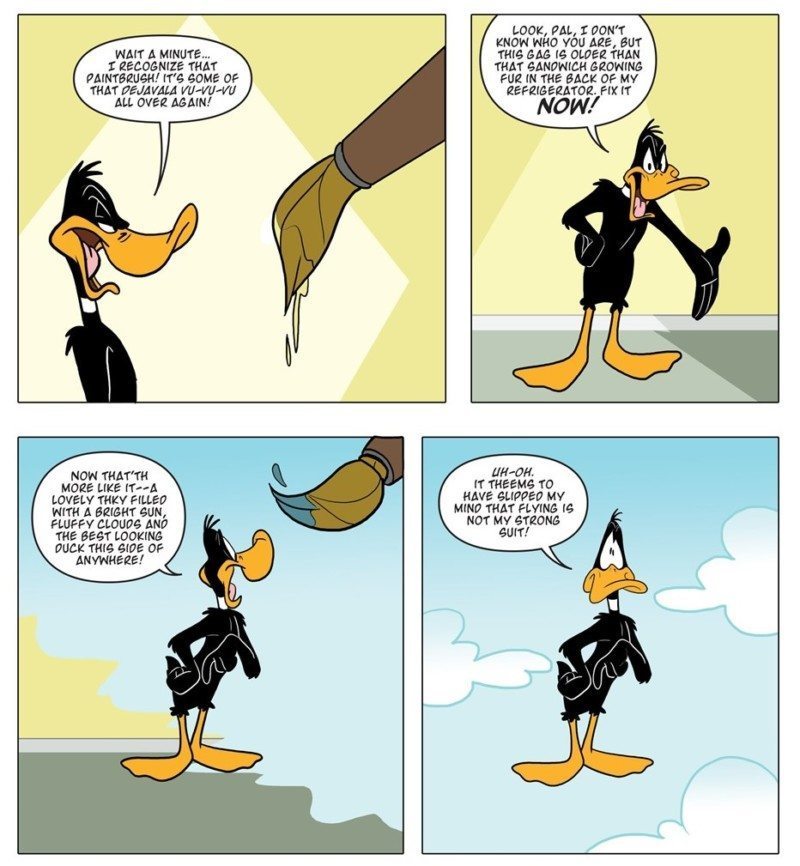 “Duckier and Amuckier” and “So You Want A Million Bucks, Eh?” are the longer stories bookending the issue. “Duckier and Amuckier” is the classic meta-piece where the character is trying to outrun the destructive artist. LOONEY TUNES #231 even shows us the cartoon versions of the creators and editor of the story messing with the ol’ Duck. I can’t help but think of Doodlebob from SPONGEBOB SQUAREPANTS.

READ: Check out our exclusive interview with the RICK AND MORTY comic team!

Daffy sure isn’t one to be played with quietly, though, as he continuously backtalks the artist, asking for an appropriate representation. Alas, no such gift is given. The most enjoyable panels are when Daffy is repainted to become Duck Knight once again, in a clear parody of BATMAN V SUPERMAN: DAWN OF JUSTICE. Bugs makes his first appearance here, sauntering in from the ominous, misty rain. Does Super-Rabbit bleed? Nope, but Duck Knight sure does. 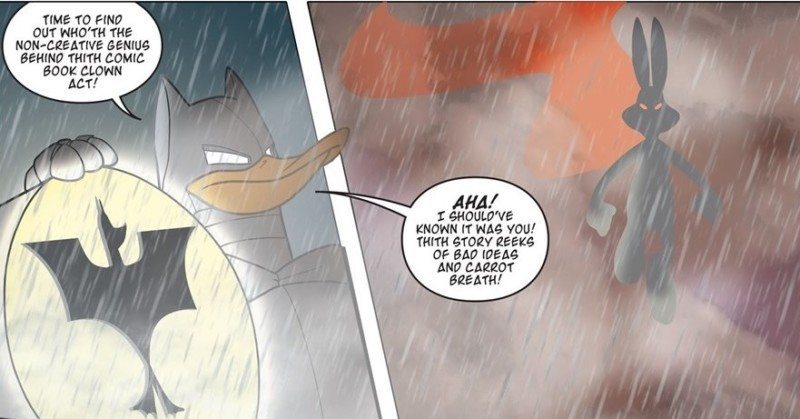 The smaller mini-stories highlight the cunning Bugs Bunny and his ability to deflect danger onto others. It’s what we adore about him. After all, why would he ever be beat? If “Duckier and Amuckier” gives you any sympathy for Daffy, “So You Want A Million Bucks, Eh?” will definitely remind you that he reaps what he sows. Daffy’s greed and arrogance get the better of him, as he tries to scheme sweet, naïve Porky Pig in a game show. It’s an excellent blend of stories that shows Daffy at his best and worst. Neither story, of course, portrays a humble, good-natured duck. 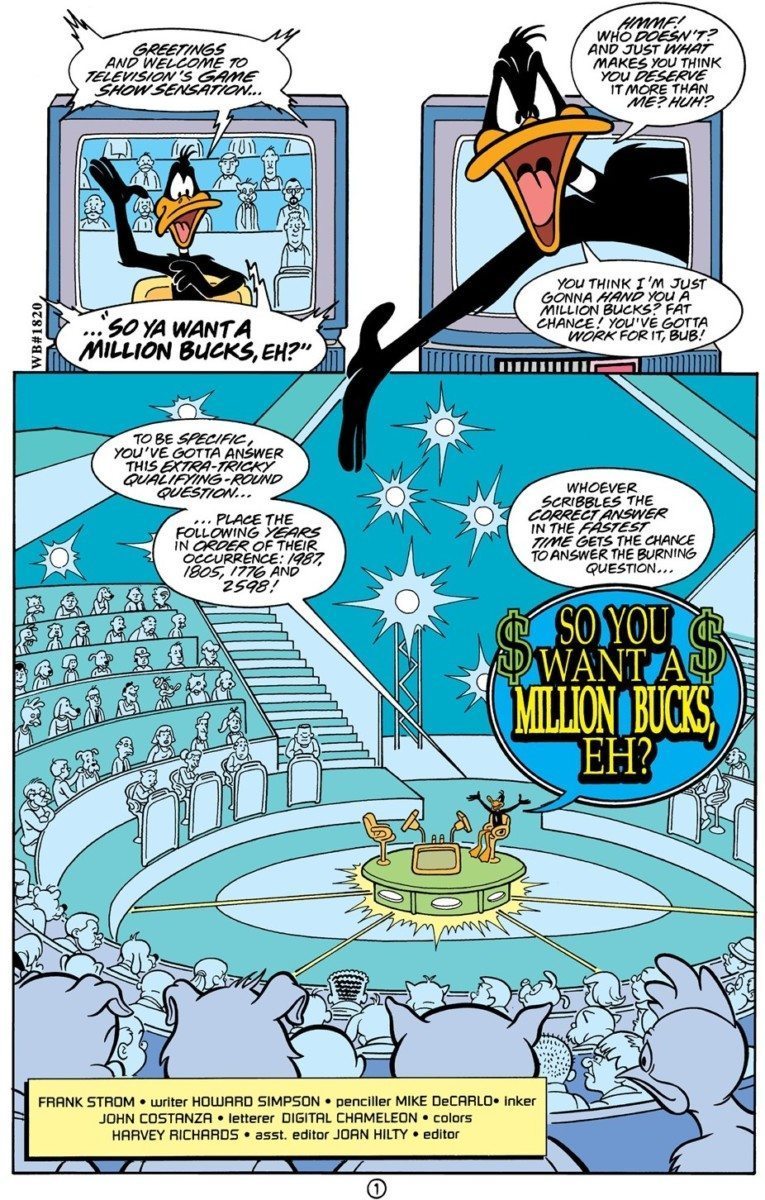 LOONEY TUNES #231 is a comic that instills joy through old gimmicks that never seem to fail. The characters are spot-on from the infamous cartoon show, and the art encapsulates their images and the action sequences perfectly. The art doesn’t have any crazy detailed backgrounds; it’s just suitable for the material. The comic is a must-read for fans of the show because it feels like these vignettes could have been episodes.

I personally am a sucker for licensed comics. I find them to be a great extension of their individual universe. This comic is no different. It allowed my mind to take a break from the stress of daily life and devour the cartoon mayhem—to just enjoy the little things. And that’s all, folks!