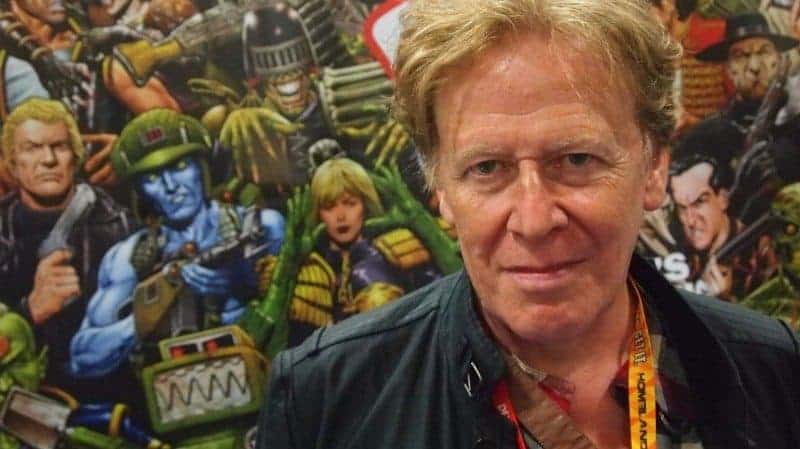 Pat Mills is the God Father of British Comics. This title isn’t given to just anyone. It’s given to the man who was the creator and first editor of 2000AD, the comic which brought into the light the artists and writers like Alan Moore, Neil Gaiman, Mike McMahon, Grant Morrison, and Brian Bolland. The man that brought so many great titles to the light of the comic universe which include Marshall Law and Slaine and also helped pen other continuing stories for ABC Warrior, Nemesis the Warlock and Accident Man.

To me Pat Mills is the man that showed me at a very early age those comics where there was more than getting one over on the bully or the school sneak week in week out. It was satirical, it could be brutal and most of it was very, very good.

Villordsutch) What in your mind would you say are your top three personal favourite creations out of your rather extensive back catalogue? I know it’s possible difficult to choose from everything but I’m hoping you can anyway.

Pat Mills) Slaine, Marshal Law and Charleys War. Slaine because I wanted to explore my Irish roots. Law because I think super heroes give us a false sense of heroism. Charleys War because the soldiers of the Great War were true heroes.

V) You’re known for many, many great creations spawned in the history of comics and you have even gained the title of “The Godfather of British Comics” which you quite rightly deserve, however is there anything in your back-catalogue that you’d like to scrub out from you timeline?

PM) Probably the stories I wrote with John Wagner when we first began. We were still learning our craft and the comic market at that time was pretty awful. So we wrote Yellowknife of the Yard for Lion. A red Indian detective at Scotland Yard. The editor didn’t want Monty Python style satire so it degenerated into a rather silly story which I found quite soul destroying to write.

V) It’s odd reading through your history and seeing what pies you had your fingers in; one for me was the comic Toxic! back in the early 90’s. This comic brought the fantastic Marshall Law and Accident Man into my life (I bought every issue and was sad to see it vanish), both were outstanding creations however you’ve often returned to Marshall Law but never really Accident Man; have you gone as far as you can go with this hitman?

PM) Not at all. Toxic was rather an outsider in British comics so it wasn’t picked up by other publishers when Toxic died. In fact Accident Man was the most popular character in Toxic so I found this very frustrating. It’s recently been reprinted by Titan Books including the Dark Horse mini-series. It’s also been film optioned several times. Currently we are in discussions with Dark Horse to do a new series of AM for Dark Horse Presents. With – fingers crossed – the amazing artist Fay Dalton illustrating it. This would also be me joining forces again with Tony Skinner my co-creator. A brilliant writer lost to comics for many years because he was whitened out of the picture by our very conservative British comic industry because he was too rock and roll for some comic professionals who really
need to take the broom out of their arse.

V) When writing across numerous storylines over so many years how do you keep track of the lore being written? Is it a down to the simple fact you’re a genius who is constantly immersed in everything you do or is it you have a fantastic team who updates you when you pitch the idea for a story at the publication?

PM) Thankfully most of my stories are reprinted so I can check! occasionally there might be some glitch. Like I believe there was some time anomaly in Nemesis affecting Torquemada which I got wrong apparently. But as the old editor who told me has a background of being vexatious I was never sure. Time travel continuity is always tricky!

V) Even at your distinguished status in the world of comics, do you ever still hit walls when you attempt to generate interest in a new idea or have you arrived at the stage where publishers realise that you high status have and will deliver work people want to buy and read?

PM) Ah I wish! No it’s actually tougher than ever primarily because publishers tend to follow personal preferences rather than mainstream demand. Two examples. I’ve tried to get girls comics originated or reprinted with zero success. Even though girls comics outsold boys by two to one no one is interested in reprinting and that includes several female editors. Why? Cos it’s mainstream and everyone wants to forget the ‘humble’ roots of comics and aim for fans or north London types. AFAIK I’m the only major brit pro around who wants to write for 9 to 13 year olds male or female. It’s a tough Market is one reason why. Comic lit or fandom is far easier.
Another example.,. Charleys War is an international commercial but it’s proving hard to get a similar WW1 series away in the centenary year! That’s how far the industry has moved away from the roots that created it.

V) With such a huge catalogue of work under your arm how often do you get letters through your door from film studios requesting the movie rights to?

PM) All the time but some of them are almost Nigerian email scams in terms of wanting something for nothing. I don’t own rights to my 2000AD material but there’s interest on my other material.

V) Is there currently any in the pipeline you can tell us of and has there been any you have shoved away?

PM) Charleys War has been optioned for a tv series but neither the artist or myself receive any royalties or remuneration for its commercial exploitation.

V) Whilst where here can I ask you about the Dredd film? I personally enjoyed it, but would have loved it to have been the pilot of a series; what where your thoughts and have you heard any further rumblings of Dredd 2?

PM) It’s a difficult one to talk about because there’s an orthodoxy about Dredd now that probably wouldn’t appreciate a more analytical point of view. And to what purpose? It’s just easier to say, ‘yeah it was great.’

V) Taking you back to your editor role, would you ever take up the challenge again of getting people to work to a deadline and making sure the work was of a standard that you thought was worthy or are those days long since past?

PM) I don’t think people would ever offer me such a position again. I’d be too expensive and critical. It would be a thankless task because to create a comic like 2000AD I had to reject a lot of art and stories. It was actually easier for me to end up writing everything myself. And I’m not sure anything’s changed today. There is still not much sense of mainstream readers today for many writers and some artists. Even though mainstream was and possibly still is potentially bigger than more ‘elite’ comics that have hi jacked or attempted to hi jack mainstream. ‘giving the readers what they want’ – the secret of mainstream – rather that what the creator wants requires technique, experience and also some humility. Example: Mach One was the most successful character in 2000AD in the first critical 6 or 7 issues. That’s embarrassing for some ‘cos he’s Six Million Dollar Man! But I deliberately put it in be ‘cos I knew it would be number one ‘cos I’d talked to kids. I knew what they wanted. Cooler characters came later. Hence the need to put your ego in a drawer if you’re going mainstream as opposed to appealing to fans.

But it’s hard work. It also means encouraging new talent and new energy like Fay Dalton (American Reaper and another story of mine) Dave Hitchcock (the artist on my new great war story)which is an exciting and rewarding process for me but I couldn’t do a whole comic of new creators. It would be too time consuming. Finally if I created a new comic I’d have to do it in a vacuum. Which was the way i created 2000AD writing stories for it on my own for nearly a year. But the danger is if i had even a conversation with another creative I could suddenly find they were claiming they were a co-creator. These things have happened I’m afraid. It’s just too risky to go through all that again.

V) Finally, if you could pass on a chunk of writing advice to anybody out there struggling to get their stories looked at what would you give them?

PM) Advice few will listen to cos I’ve passed this advice on before and I know it’s been ignored by other comic writers. Why? Cos it will challenge their soul, be really hard work and undermine their value systems in rather elitist comics which need undermining. It is: Buy Robert McKees STORY a guide to film writing which applies to comics too. I’ve read it three times as well as going to his seminar and I’m still learning from it. The rules of mainstream are close to McKee. He’s my bible. New writers may still not get stories accepted but at least McKee can guide them and show them where they went wrong. And empower them IF they are ready to listen to him. IF.