Back in 2011, Brian Michael Bendis and Sara Pichelli created an entirely new web-slinging superhero: Miles Morales. At the time of his debut, Miles gained immediate attention for being an Afro-Latino Spider-Man — and the first one at that. Miles begins his journey as a young, scared kid who doesn’t necessarily want the powers he’s suddenly found himself with. However, after the real world shocks Miles into action, he embraces the superhero mantle and does his best to uphold the classic Spider-Man ethos: with great power comes great responsibility.

Miles has always been a character near and dear to Bendis’ heart. In fact, his farewell issue to the web-slinger differs from the others — it draws immensely from Bendis’ own personal struggles and health issues. While Miles hangs on for dear life, Bendis shows readers exactly what it is about Miles that has captivated audiences. In his farewell letter, Bendis reflects on Miles’ creation: “Could Spider-Man BE someone else? Who? Why? Well, those ideas scared the hell out of me. So I did what you do when something scares the hell out of you creatively. You do it. You do it in spite of.”

Brian Michael Bendis Moves to DC Comics: How Marvel Can Fill the Void for His 3 Main Creations

Miles Morales was originally conceived as a character just before the 2008 presidential election, a reaction to the hope that Barack Obama would be the first black president of the United States. Miles’ creation was inspired by Barack Obama and Donald Glover, the latter of whom the internet campaigned to play Peter Parker in 2011. At the time, former Marvel Comics Editor-in-Chief Axel Alonso and other writers hoped to replace the Ultimate Universe’s Peter Parker with Miles Morales as part of the ULTIMATUM storyline. However, this ended up not happening as there was no definitive story for Miles yet.

Marvel’s Ultimate Universe was created by Bendis back in 2000. ULTIMATE SPIDER-MAN #1 kicked off the reimagining of a world where Marvel’s most iconic heroes had been created in the year 2000 rather than the 1960s. By 2011, the Ultimate Universe was gearing up for the storyline “The Death of Spider-Man”. You might’ve guessed it, but this story concludes Peter Parker’s tenure as the titular web-slinger.

Miles Morales makes his first appearance in ULTIMATE FALLOUT #4: a kid, barely a teenager, in a store-bought costume. Initially unknown, Miles fights the Kangaroo. Despite being relatively successful, the crowd that gathers around him during the fight remarks that his choice of costume, so soon after Peter Parker’s death, might be in poor taste.

At the end, Miles pulls off his too-big costume mask to reveal his face for the first time.

Shortly after Miles’ first appearance, ULTIMATE COMICS: SPIDER-MAN begins. The comic begins just before Peter Parker’s death, following Miles’ origin story. A regular kid, Miles deeply admires his uncle, Aaron Davis. Miles’ dad, Jefferson, is a cop who dislikes mutants, and his mother, Rio, works at a hospital. In the first issue, Miles wins a lottery to attend Brooklyn Visions Academy, a charter school his parents are ecstatic for him to attend, as it will provide him with better opportunities outside of their Brooklyn neighborhood.

Unbeknownst to Miles, his uncle Aaron moonlights as the Prowler, one of the world’s most notorious thieves. During a heist, a spider experimented on by Dr. Markus (an Osborn employee) crawls into Aaron’s bag. That same spider bites Miles during a visit to his uncle’s apartment. Boom, spider powers! In addition to climbing walls, spider sense, and enhanced strength, Miles can camouflage himself and zap villains with a venom strike.

Initially, Miles has no desire to do anything with his powers. After all, he’s just a thirteen-year-old kid. Miles’ best friend, Ganke, encourages him to pursue superheroism and Miles considers the idea. However, when he vomits in an alley after saving a child from a burning building, he decides he’s not cut out for it.

Weeks pass and Miles focuses on school. One night, the school evacuates all of the students into the gymnasium. Spider-Man has just been shot, and Norman Osborn is tearing up the city. Miles sneaks out and goes to find Spider-Man just as he’s been unmasked, dying in Aunt May’s arms. Miles is overwhelmed with guilt, believing that if he had only embraced his powers in the beginning, he could have helped Peter Parker. At the funeral, Miles asks Gwen Stacy why Peter became Spider-Man in the first place. She passes along the ethos Uncle Ben instilled in Peter: with great power comes great responsibility.

Miles goes out in his Halloween Spidey outfit approximately three times before S.H.I.E.L.D. takes notice and finds him. Still reeling from Peter Parker’s death, Nick Fury and the Ultimates are reluctant to let another kid with powers run around New York City. Just before Nick Fury squashes Miles’ aspirations, Electro breaks free from containment and wreaks havoc on the S.H.I.E.L.D. headquarters. Miles helps save the day and in return, Nick Fury sends Miles his own suit, giving him one chance.

It’s also around this time that Peter Parker from Earth-616 meets Miles in a comic titled SPIDER-MEN. They work together to defeat Mysterio and 616-Peter emotionally unites with the Ultimate Universe’s Aunt May and Gwen Stacy. In the end, Peter gives Miles his blessing and returns to his home universe.

Later, Aunt May and Gwen Stacy gift Miles with Peter Parker’s old web shooters. He soon develops relationships with both characters, as well as with Mary Jane Watson, all of whom know his secret identity.

As the “new” Spider-Man begins to draw more attention, Miles’ Uncle Aaron deduces the identity of the new web-slinger. As the Prowler, Uncle Aaron becomes Miles’ first true adversary. During a tragic fight, Miles accidentally causes a malfunction in the Prowler’s weapons, killing him. Aaron’s dying words to Miles are an affirmation of how similar he believes they truly are.

Miles spends a lot of time as a hero plagued by the idea that he could just as easily be a villain — both his uncle and his father were, at one point, criminals. Miles struggles with the idea that crime might, in fact, be in his blood.

Being A Hero Means That Sometimes, You Lose

Miles’ next big villain is Dr. Markus, who has obtained the Venom symbiote. Venom assumes Jefferson is Spider-Man and goes after Miles’ mother, Rio, in the hospital where she works. In the chaos of the fight, a bullet ricochets off Venom and hits Rio, killing her. With her dying breath, she tells Miles not to tell his father about his secret identity. In the aftermath, Miles quits superheroics for a year. Ganke and Spider-Woman convince him to pick up the mantle again, though he does so hesitantly.

Among other stories, like Earth-616 Galactus coming into the Ultimate Universe and trying to eat everything (see: CATACLYSM), Miles tells his father about his secret life when he thinks the world is ending. Jefferson reacts poorly to the news, disowning Miles and blaming him for the deaths of Rio and Aaron.

Miles begins his second solo series, MILES MORALES: ULTIMATE SPIDER-MAN, thinking his father hates him. Then, Peter Parker comes back from the dead. So, you know, that’s cool!

For reasons Peter himself doesn’t understand, he didn’t die. He runs into Miles to get back his web shooters, as they hold sentimental value for him. They butt heads at first but team up to defeat the still-alive Norman Osborn. In the end, Peter gives Miles his blessing and decides to take time for himself and his family.

This reflection paves the way for Miles to reconcile with his father, who comes clean and tells his son about his past as a spy for S.H.I.E.L.D. What follows is a storyline where Dr. Doom kidnaps Miles, Ganke, and Jefferson. Miles’ second solo comic run ends abruptly due to SECRET WARS.

After a brief stint fighting on Battleworld during SECRET WARS, Miles and his loved ones are restored to Earth-616, including his mother. Miles and his family appear to have no recollection of their past memories. In the mainstream continuity, both Peter Parker and Miles bear the mantle of Spider-Man. As CEO of Parker Industries, Peter handles superheroics on a global scale. Miles, under Peter’s tutelage, takes care of the street-level crime. He even joins the Avengers for a little bit.

During the CIVIL WAR II event, Miles plays a significant role after the Inhuman Ulysses sees a vision of Miles killing Captain America. In the aftermath, Miles joins the Champions in their own title, a superhero team consisting initially of Spider-Man, Nova, Ms. Marvel, Viv Vision, Amadeus Cho as the Hulk, and the time-displaced Cyclops.

In his third solo title, SPIDER-MAN, Miles experiences a crisis of identity, giving up the name Spider-Man to figure out what fits him best. Miles takes a brief stint off from crime-fighting in New York only to stir up some trouble in China. Miles’ insecurity presents an interesting conflict that bleeds over into his superheroics that traces back to his original fear. Is he meant to be a villain, after all? What if he doesn’t deserve the name Spider-Man? How does his insecurity match up with his responsibility?

Bendis’ farewell issue to Miles meditates on what makes Miles who he is as he fights an unexpected illness. The issue is a take on Miles but also Bendis himself, who nearly died from a case of MRSA that went septic in December 2017. The autobiographical influence is derived not just from illness, however, but also the love and warmth Bendis felt from his fellow Marvel creators in recovery. In his letter at the end of the issue, Bendis says that writing Spider-Man, especially Miles, helped Bendis himself figure out who he was at the end of it.

Over the course of a few years, readers have seen Miles Morales grow from a scared thirteen-year-old kid to a more confident superhero. Beyond simply being the “black Spider-Man,” a title ignorantly given to this wall crawler, Miles is a compelling character with his own struggles that he faces day in and day out because, as everyone knows, with great power comes great responsibility. Similarly, readers have seen Bendis create a lasting legacy in Marvel. As Bendis put it himself in his farewell letter, it’s a mountain already conquered. 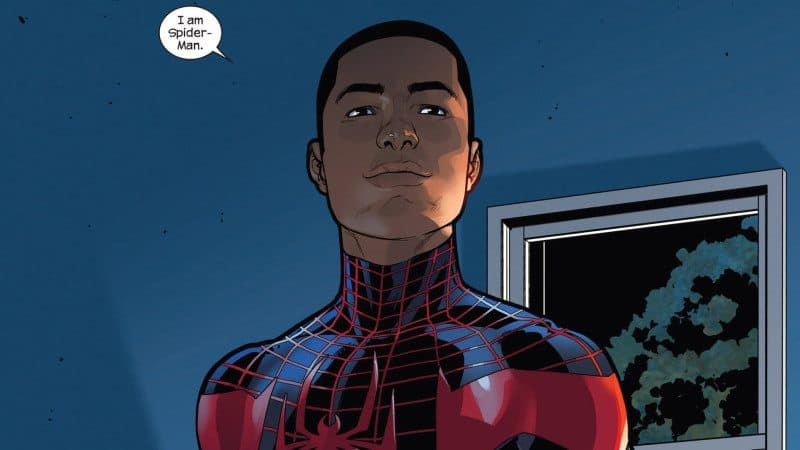 Miles Morales in the Real World

When Miles Morales debuted in ULTIMATE FALLOUT #4 back in 2011, he immediately gained international media attention. There was a lot to talk about — first and foremost being that in a significant universe, Peter Parker is dead and his successor is an Afro-Latino kid from Brooklyn. Miles is the first black character to take up the Spider-Man name (but not the first Latino character — Spider-Man 2099 gets that one). Some of the backlash the character faced stemmed from the belief that his creation was solely a poor attempt to pander to an over-sensitive and “politically correct” culture. But it’s always been more than that. Everyone involved in Miles’ creation cited the need for characters who accurately reflect the world we live in. This is a step in the right direction.

Kids growing up today can look at Miles and see someone who looks like them and who they can relate to. Positive and diverse depictions of characters are absolutely necessary. Miles provides a much easier access point to comics than Peter Parker, with decades of complicated and convoluted history trailing behind. Not to mention the fact that in the mainstream universe, Peter Parker is pushing thirty years old. Now that the two are working together in the same universe, Miles acts as a fresh twist in the superhero origin who can hang with the best of them.