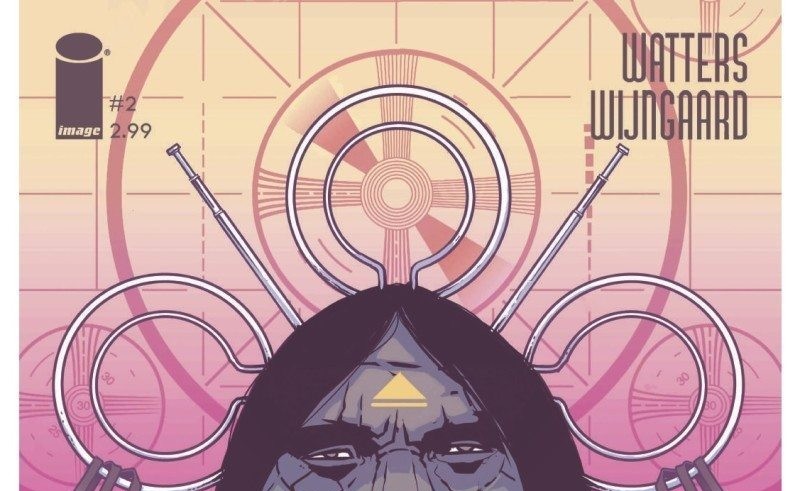 If I was ever given the task to outline all the reasons why I enjoy comics and graphic novels as a storytelling art form, I’d have to start with the fact that when done well, they can so thoroughly combine visual and literary storytelling in new, innovative ways. On that note, I’m happy to say that, with the permission of co-creators Dan Watters and Caspar Wijngaard, I’ll be providing a preview of their second issue for LIMBO, to be released this week on December 9th. Two issues in, and as someone who always attempts to give a comic book series several chances to hook my interest or redeem themselves, I’m excited to share my most sincere thoughts about this series. Here’s a clue: I don’t, for one moment, hesitate to believe that LIMBO falls under the “new and innovative” category. 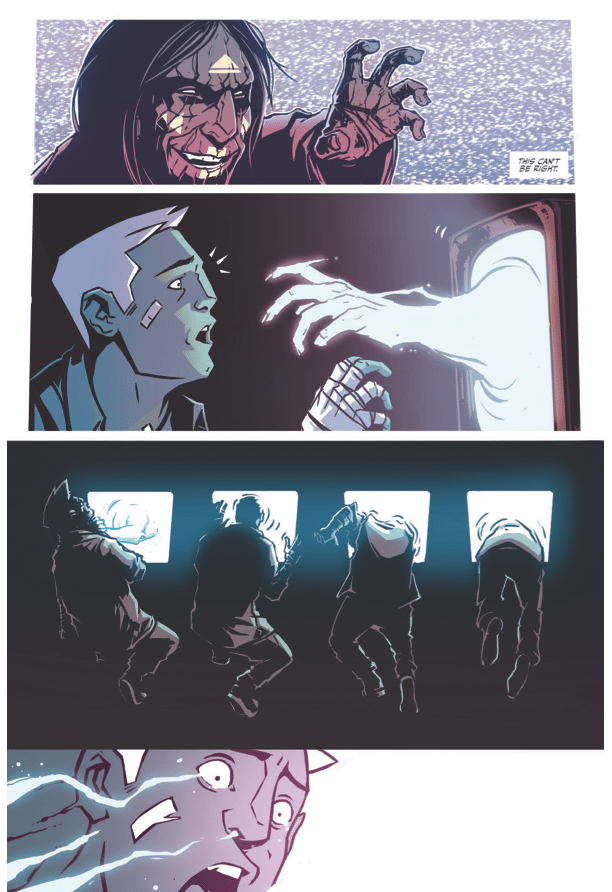 Now, let me begin by stressing that good storytelling will always be good storytelling, and good art will always be good art. Despite the liberal use of such a contrived adjective as “good,” I do mean it. I truly believe anyone can write, tell, or create a story. What is a challenge, however, is to write a good story. This is one very important element that Dan Watters and Caspar Wijngaard have in aces in their original story, LIMBO. As one of a fantastic staff of writers and contributors, I am not alone in that I’ve read and seen a variety of stories in different media and styles. At risk of sounding like I’m trying to absolve myself, I identify myself as someone who is easily pleased in the comic book department.

That being said, LIMBO is one of the few comic book series out there that I believe is truly important in the context of where comic book stories are going now–especially under a publisher like Image. There are few comics that I sincerely get excited about reading when they actually release. Living in a culture that exacerbates the need for instant-gratification makes me guilty of the “binging” phenomenon that has taken hold of many when it comes to stories. LIMBO is one of those comics that I never expected to hook me in the way it did, and it continues to surprise me in its quiet emergence.

READ: Like SAGA? You’ll love PAPER GIRLS! Check out our review of issue 3!

As stated before in my review of the first issue, Dan Watters takes a familiar genre, that of noir, embraces it, and makes it his own. Flanking him is new up-and-coming artist Caspar Wijngaard, taking comic book art’s intent for communication without losing any sense of individuality. This is not an indie series at its core. If anything, it succeeds in easing the reader in and doing exactly what it was made to do: tell a damn good story that keeps you interested. LIMBO is a series that casually reflects upon the artificial light of our computers and phones keeping us up way past our bedtimes, and the strange beauty and horror behind it all. While in the first issue, it seems that the story would go “technology v. nature” as many great stories have done in the past, LIMBO succeeds in turning away from the simplicity in that dichotomy.

In other words, this series is weird. Who doesn’t like weird? Weird means new. Weird means unfamiliar. Weird means unusual. LIMBO’s story concept is already cool: Dedande is a pseudo-supernatural city that celebrates Dia de los Meurtos and houses intriguing characters like a drug boss with a wrestler’s mask and an amnesiac P.I. with bandages on his hands. Just on the pitch alone, one can easily be sold, but what keeps me excited about Dan Watters’ and Caspar Wijngaard’s work is how seamlessly they work together. Anyone can understand the peaks and valleys in collaborating with another person. Despite whatever goes on behind closed doors, these two manage to seemingly share a mind and create something as simultaneously simplistic and disarming as LIMBO.

WATCH: One of the interviews we did at NYCC 2015- See what Greg Pak had to say!

Mr. Clay is everything you would want in a Neo-Noir story protagonist: stoic and logical with just the right amount of casual mystery. We follow him in his efforts to help his most recent femme fatale client, Bridgette, with video evidence against the drug lord, the Thumb. Seems like that storyline will be cleaned up, nice and tidy. Alas, when has anything ever been that simple? 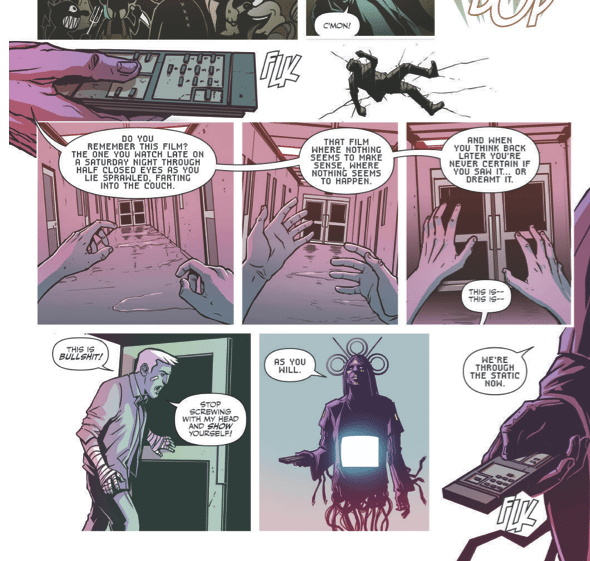 Without divulging too much information, the second issue includes a very interesting dynamic between Clay and a shaman that does a cool “trick” with a goat and a static TV. There may or may not also be some channel surfing (see what I did there?). Again, while this concept has survived in literature, film, and animation, alike, LIMBO takes this idea and transforms it into something unique. Not only are the panels beautifully thought out, but true to the nature of any noir story, not everything is as it seems. It would be one thing if Dan Watters and Caspar Wijngaard had just written a mystery story, but they don’t hold back from creating many overlapping layers to the experience of reading LIMBO.

READ: Are you a fan of SANDMAN? Read the SANDMAN: OVERTURE prequel to get your fix!

To clarify, from the surface, it’s pretty and is a fun story. When going deeper, it touches upon something very real about our culture’s relationship with technology. Looking into it further, you come to realize that the comic beautifully illustrates the story’s themes in a new exciting way. Even deeper than that, you find that underneath the simplicity of Caspar Wijngaard’s lines and Dan Watters’ story, there is something else going on. Just as Clay is getting sucked into a story or a narrative that he was not first intent on getting hooked into, so does the reader.

The motif of the TV and channel surfing as well as the overall theme of the otherworldliness of technology, audio and visual tapes alike, take hold in the second issue particularly. TV static and this idea of being between worlds becomes increasingly more title-relevant: Clay, the PI who only knows a limited amount of knowledge about himself, but not of where he’s from or where he’s going; cable TV, a cycle of a set variety of channels that help you transition from waking life to sleeping.; storytelling, a means of creative escapism and distraction into a variety of narratives that are not your own. Yet, this limbo in LIMBO is what links us all together, like a person in the TV’s static world, looking into the “cathode ray windows” of everyone’s TV screen. Plus, the relationship we all have with music and TV entertainment is in a way deified in the story itself, with the teleshaman using his ancient, organic magic through more technological channels, and Clay’s friend, Sandy, communicating through the aid of cassette tapes and music. 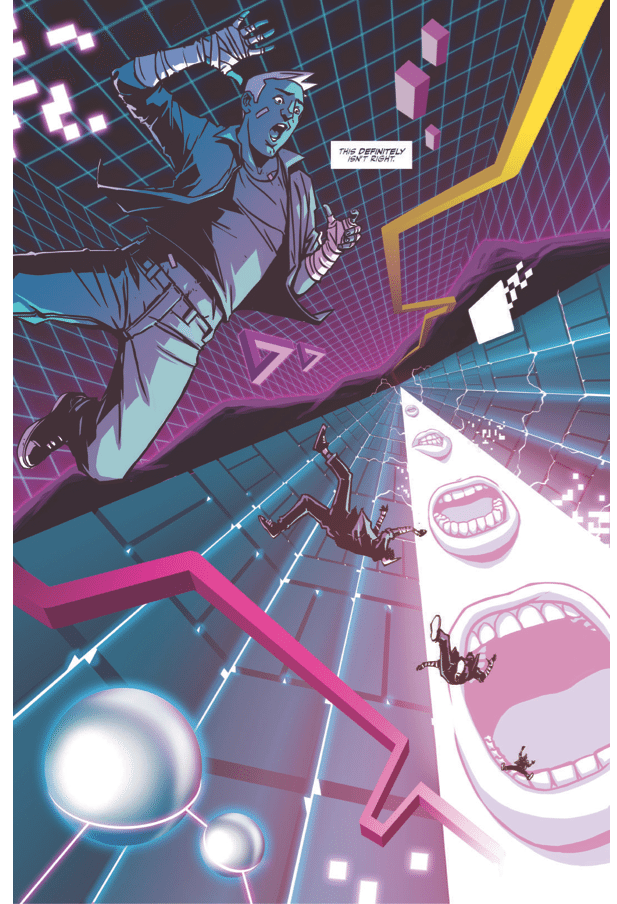 In an overused yet apropos word, it’s meta.

Again, if you enjoy beauty in the form of fun and stylistic use of neon color gradations, or just a simple noir story, you got it. If you want more, it’s all there between the lines.

Dan Watters and Caspar Wijngaard were able to do this. I’m not even entirely sure how, but I’m so very glad they did.

Make sure you do the right thing and pick up the second issue coming out this Wednesday, December ninth. Because if this series is anything but unique, weird, or fun, it’s punk as f***.