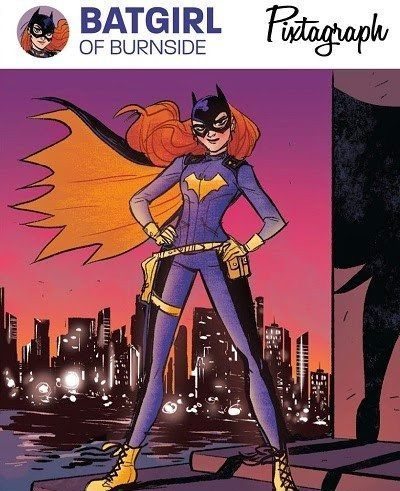 Babs Tarr, artist on BATGIRL, recently described Batgirl as “the light to Batman’s dark.” Whether you agree with that or not (I certainly do), you can at the very least agree that the pages of BATGIRL support that claim 200%. For too long we’ve equated “cool” and “serious” characters and stories with darkness, brooding, anger, and violence. It’s a trend that peaked in the 70s with films like THE GODFATHER and TAXI DRIVER and EASY RIDER— men doing dark, “manly” things– and hasn’t really stopped since. THE DARK KNIGHT gained mainstream notoriety and critical caché because it was so realistic and dark and… blah blah blah.

READ: Our interview with Babs Tarr! 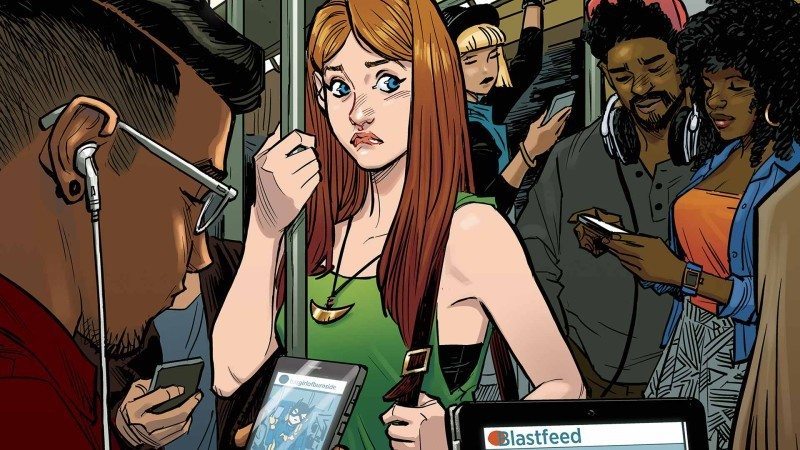 I maintain Marvel Studios’ continued critical and popular success is owed to them pursuing one goal: remembering the fun. Even MAN OF STEEL, a movie about a guy raised on a farm in the American heartland who literally derives his power from pure sunlight was dark and serious and violent (don’t get me wrong: I think MAN OF STEEL gets a worse rap than it deserves, but that’s for another time). The biggest box office surprise of 2014 was GUARDIANS OF THE GALAXY. Due to the obscurity of the property and the sheer wackiness of its premise, no one really knew what to expect– especially not the level of critical and financial success it enjoyed.

I believe that’s owed to the joy at the heart of the film. I mean, for goodness’ sake, the film’s main villain (the overserious and pouty Ronan the Accuser with his mighty hammer of anger) was defeated by dance and friendship. The world’s heart melted for a baby tree dancing to Michael Jackson.

I think everyone responded to its overwhelming positivity and joy and enthusiasm at a time when we all believe we have to be as cynical as possible to survive in this world. 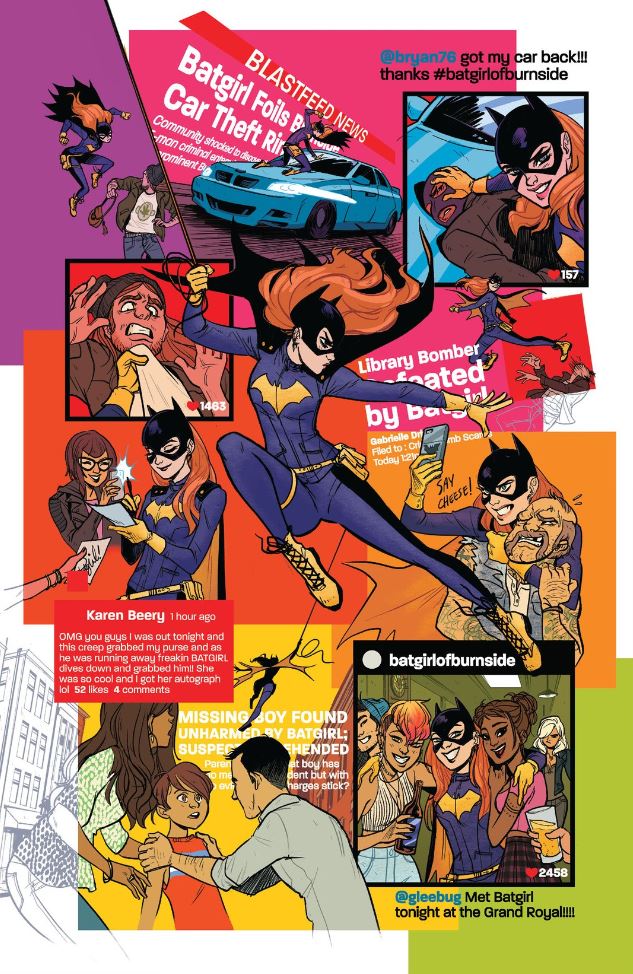 Enter the Batgirl of Burnside. Armed with an indomitable spirit, a wide-range of skills, and a kick-ass costume, the new Barbara Gordon took the comic book world by storm. Each moment and page of the new BATGIRL is infused with joy and energy and life to the point where you can feel the comic vibrating in your hands. This isn’t a girl who lives to fight crime, but a girl who fights crime while she lives. Her responsibility to protect Gotham city is part of her identity, but not, like Batman, the biggest part. She’s many things, at any time, depending on what is needed– a scientist, a daughter, a friend, a fighter, a lover, a roommate, and sometimes, yeah, a scared little girl.

Barbara Gordon’s past is dark, both within the world of her story and without. Paralyzed by the Joker in Alan Moore and Brian Bolland’s mistakenly-lauded THE KILLING JOKE, Barbara has been the victim of men both fictional and non-fictional (according to Alan Moore, when he asked at-the-time-editor Len Wein about shooting, and ultimately paralyzing, Barbara, Wein responded, “Yeah, okay, cripple the bitch.”  It should also be noted that this is not the only problem with THE KILLING JOKE— just the most relevant.)

I bring this up to illustrate that the new BATGIRL is the story of a girl who isn’t defined by her trauma– no matter how hard people try to make her as such. It even addressed the idea directly (in #40) when a computer version of Barbara tried to convince the real Barbara that she was still paralyzed, still in a hospital, and still suffering. In the same way that Barbara defeated that version of herself, she’s defeated the old version of her character.

She’s doing what any girl– what any person— is trying to do: find their place in this world. Rather than retreat into herself and let herself be hurt and wait for her place to find her, she’s out there, going to work, going out with friends, having fun, and kicking ass (figuratively and literally) and just trying to balance it all. Her youthful desire for an enjoyable life is consistently at odds with her unshakeable sense of responsibility– to herself, to her friends, to her city. 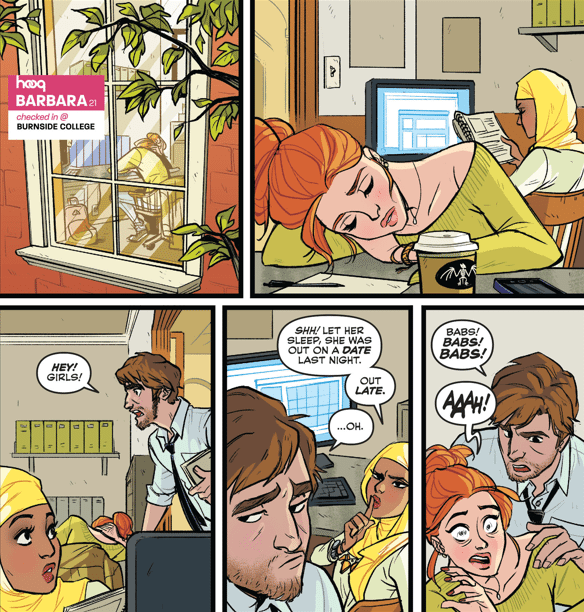 It’s a wonderfully positive message in itself, but it’s executed every month with such buoyancy, such joie de vivre, that it’s infectious. Cameron Stewart and Brenden Fletcher construct the juggling act, Tarr makes it dance, and colorist Maris Wicks makes it sing. 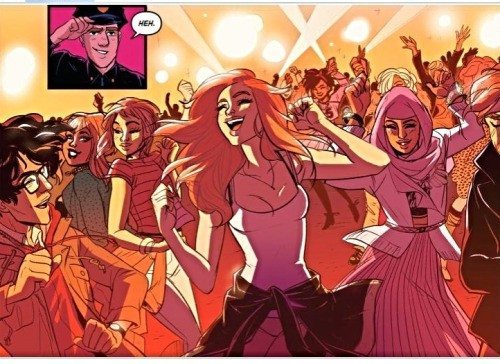 No, it’s not perfect– few comics (if any) are, but there are good stories being told here, with good messages– and not hit-you-over-the-head, after-school-special, preachy messages either. They’re stories about what it’s like to be young and wanting in the modern world, and that’s something everyone can relate to.

And they have related to it–in droves. When Tarr and Stewart revealed the redesign of Barbara Gordon’s costume, the internet exploded. There were the usual naysayers, the kind of people that are really excited about THE KILLING JOKE maybe getting an R-rated adaptation, but most everyone else responded positively. So positively in fact, that if there’s any kind of record for most cosplayers in the shortest period of time, the new Batgirl broke it. The fact that her costume is literally something anyone can put together only makes her that much more accessible. 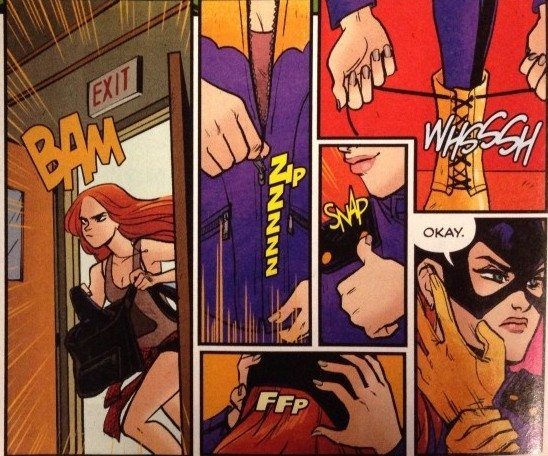 In the same way people responded to GUARDIANS OF THE GALAXY, people are responding to BATGIRL. People want to be happy and want to be infected by joy– the people that don’t can read THE DARK KNIGHT RETURNS again. (I think people fell along these lines once again with the new SUPERGIRL on CBS— another DC Comics property that has joy and energy pouring out of every corner, with a young girl at its center that could very easily call Barbara a friend.)

I understand the temptation, and how easy it is, to set the Batgirl of Burnside as a champion or figurehead of a specific social group, to maybe even claim her. While you would be justified in doing so, and while you’re encouraged to consider her a role model, I also urge to you remember that she doesn’t belong to any one group–that’s her magic. What the Batgirl of Burnside represents is that good stories can come from anywhere. Our heroes and their stories don’t have to be gritty, angry, violent, and dark, trafficking only in sexuality and femininity when it suits the male character or male fantasies. Yes, Barbara is a young woman, and yes she’s independent and strong and flawed, but she’s not just a character for people like her. She’s a character for everyone, because that indomitable spirit at the heart of her book is something that transcends all differences

With the best issue so far (#45) available now, the Batgirl of Burnside looks like she and her exuberance are here to say. As a recovering cynic, I’m happy to say I’m, well, happy about that.