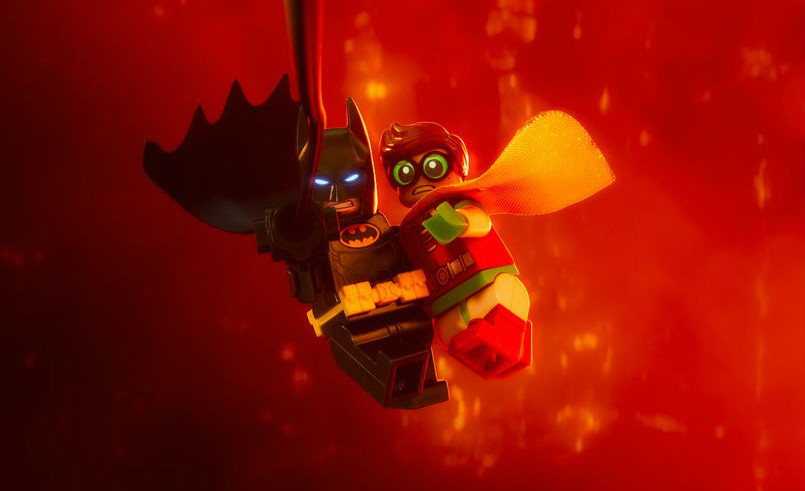 The following article contains spoilers for THE LEGO BATMAN MOVIE

Batman is the most popular comic book character of all time. Sure, arguments can be made for Superman being more important, or Spider-Man being more beloved, but Batman has had a staying power in the cultural imagination that is untouched by many. Other superheroes have had films, television shows, and cartoon series, but many of those shows pale in comparison to the Dark Knight’s forays into multiple forms of media.

In the comic book world, Batman has been one of DC’s most vital characters, headlining countless books and pushing the boundaries of the genre in landmark books like BATMAN: YEAR ONE or BATMAN: ARKHAM ASYLUM. Even speaking as someone who wouldn’t consider Batman to be his favorite comic book character, I’m currently looking at 10 Batman-related DVDs sitting on my shelf. The character’s ubiquity (or perhaps “u-bat-quity” would be more appropriate) has fed into his popularity and vice versa. However, with that popularity comes varying, and even contradictory, understanding of who Batman is at the core of his character. Because the character is so mutable, he can be interpreted in so many ways. Somehow the Batman played by Adam West is the same character drawn by Frank Miller, voiced by Kevin Conroy, and played again by Ben Affleck.

It was this lengthy history that played into THE LEGO MOVIE’s portrayal of Batman. In that film, Batman (voiced brilliantly by Will Arnett) is brash and ego-driven, like Bruce Campbell’s entire acting oeuvre blended with ARRESTED DEVELOPMENT’s Gob Bluth. He was, essentially, the characterization of Batman in popular culture brought to life. Lego Batman was the super serious, super important comic book character who you’d better take seriously. His theme song pretty much sums it all up. This was the creators of THE LEGO MOVIE looking at the modern reinvention of Batman and cranking his personality up to 11,000.

The popularity of this character in THE LEGO MOVIE brought the inevitable spin-off, but the team behind THE LEGO BATMAN MOVIE tries to tackle a very specific question: if Batman is always reinventing himself, then why do so many people perceive Batman as an introverted jerk? 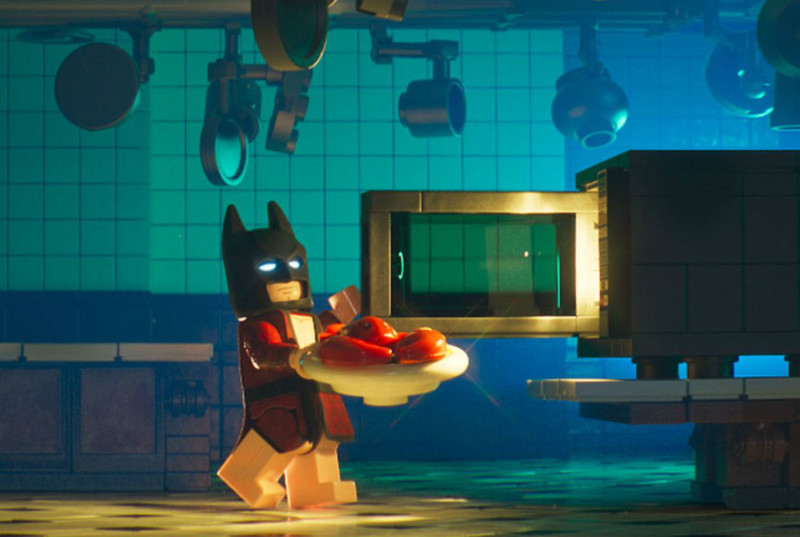 The more recent adaptations of Batman certainly don’t help to rehabilitate this image. At Birth.Movies.Death., writer Dave Shilling observed that in BATMAN V SUPERMAN the character is “a pissed-off xenophobe with a barely restrained blood lust and a penchant for lashing out at anyone who didn’t agree with his twisted worldview. Sound familiar?” Granted, BATMAN V SUPERMAN was released before the Trump era truly began, but Shilling’s observations about Batman and how he reflects our culture can’t help but sting. Is Batman as a Trumpian figure really the future for the Caped Crusader? Is THE LEGO MOVIE right about the Dark Knight? Is our modern version of the character nothing more than a selfish bully? In an effort to distance themselves from the camp of Adam West and Joel Schumacher, the filmmakers who currently create Batman films have inadvertently removed Batman’s compassion.

In THE LEGO BATMAN MOVIE, director Chris McKay and screenwriters Seth Grahame-Smith, Chris McKenna, Erik Sommers, Jared Stern, and John Whittington take some very specific, yet deliberate, creative liberties with their version of Lego Batman. This version seems to exist in continuity with just about every adaptation of Batman you could imagine. The movie is crammed with Easter Eggs that will delight fans, from obscure Silver Age Batman baddies to visual gags referencing the 1943 Batman film serial. However, this is a Batman clearly cut from the cloth of Christopher Nolan and Zack Snyder. The movie’s opening title sequence apes the style of THE DARK KNIGHT TRILOGY with the muted colors of the WB logo flashing across the screen as Batman explains how important the film must be if the opening is in black and white.

CLICK: Comics and Legos collide in our exploration of meta-fiction in FLEX MENTALLO and THE LEGO MOVIE

Then the character is further filtered through the memetic internet culture of Batfans. He’s a brooding loner convinced that he is the smartest guy in the room and who tells the Joker that his greatest enemy is Superman, obviously. He’s an insufferable jerk. The inevitable end point of Batman as the lone, stoic, repressed vigilante is presented in the film as Batman, alone, in a bathrobe, eating microwaved lobster. So what is missing from this grim n’ gritty variation on Batman?

He still has Alfred, as most adaptations of Batman do, to give Batman someone to brood to. Jim Gordon is there, but he’s portrayed as just the guy who flips the Batsignal. The major component that has been missing from every major Batman adaptation from the last decade becomes the film’s emotional core: Robin, the Boy Wonder. The choice to make THE LEGO BATMAN MOVIE an origin story for the Dynamic Duo reveals just how crucial Robin is to our perception of the character of Batman.

It’s important to remember that before Robin became a recurring character in the Batman comics, Batman was a very different character than we know him today. He was callous, a killer, and even wielded twin handguns to dispatch with criminals. It is Robin that fundamentally changes the way we see Batman. In his book THE CAPED CRUSADE, author Glen Weldon points out that Robin’s first appearance is only one short year after Batman’s and, following the arrival of a kid to the book, Batman softens as a character and becomes the hero with a code against killing.

In THE LEGO BATMAN MOVIE, Robin also has his characteristics exaggerated to fit the comedic sensibilities of Lego’s comedy. He is literally a wide-eyed innocent, puppy dog orphan. It’s his enthusiasm and positivity that finally manages to break through Batman’s plastic exterior. Robin gives Batman a “son” and, by extension, the catharsis to move on from his own trauma. The film recognizes Robin’s importance as both Batman’s crime fighting partner and his moral support system.

Whether the character is explicitly present in a story or not, Robin acts as Batman’s conscience. Nolan may not have used the character explicitly, but Robin is a vital component of Nolan’s thesis of Batman as an abstract symbol of justice rather than the burden of one man. I mean, holy obvious metaphor, he literally named the character who would take over Bruce Wayne’s mission “Robin.” Even Frank Miller’s THE DARK KNIGHT RETURNS, one of the foundational texts used to support the idea of the self-serious Batman, recognized the importance of Robin in the Batman equation and introduced Carrie Kelly, who provides moral and tactical support to the aging Bruce Wayne. Robin is so much more than a sidekick. He is the rejection of Batman as the lone, isolated avenger. Robin is Nightwing, Batgirl, Spoiler, Batwoman, and even Ace the Bathound. Robin is Batman’s compassion. Robin is the start of an entire Batfamily.

CLICK: Why THE LEGO MOVIE is the best of American animation

It is that concept of family that THE LEGO BATMAN MOVIE uses Robin to represent. Lego Batman puts on the super awesome facade to mask the loneliness he has felt since the death of his parents. Robin provides him with the beginning of the family he has longed for since that fateful night in Crime Alley. It’s only when Batman is able to finally make himself open to the idea of a family that he’s able to show the people of Gotham how to literally hold the crumbling Lego bricks of the city in place after the Joker sets off his deadly bomb. His compassion, brought out by Robin, even allows him to reach out to his greatest enemy and keep the world together. THE LEGO BATMAN MOVIE posits that we need Robins and Batgirls and Alfreds and even an entire Rogues Gallery of villains because nobody can keep the world in one piece alone.

So what happens to Batman without Robin?

In 2016’s BATMAN V SUPERMAN, Robin has been killed prior to the events of the film. Snyder’s vision of Batman is closer to the weathered, worn-down one on THE DARK KNIGHT RETURNS end of the Batman spectrum as opposed to the peak physical condition version we typically see in these films. As such, he is a crueler Batman who has no qualms about killing any criminals in his wake. It’s an ugly version of Batman and one that many fans of the character, myself included, found difficult to swallow, especially when contrasted with an equally dour Superman (if you can call two grown men in tights frowning at each other a “contrast”).

Maybe these judgments are too harsh. Maybe Snyder’s point was that, without Robin, Batman returns to his earlier, more violent methods. The death of Robin drove him to extremes he hadn’t taken in years. Then, when he realizes his mistake in attacking Superman and finally sees the destructive monster he has become he….

…basically murders a room full of dudes to save Martha Kent. 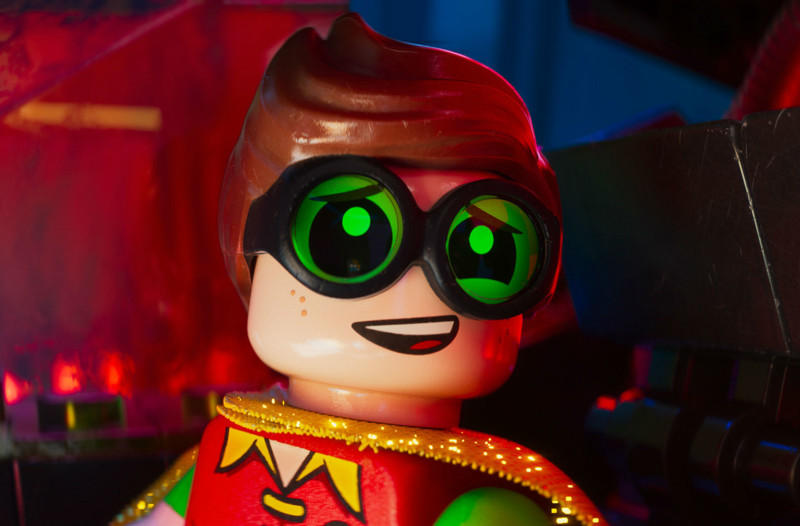 Now Robin wouldn’t have necessarily turned BATMAN V SUPERMAN into a rollicking adventure yarn, but Robin’s unceremonious off-screen death sent a very clear message to the audiences watching BATMAN V SUPERMAN: this ain’t a fun comic book movie. Does “fun” need to be a component in every comic book film? Of course not, but as THE LEGO BATMAN MOVIE shows, Robin is more than an element of “fun” in the Batman mythos. He’s the element that keeps Batman from becoming just another emotionally repressed anti-hero in the pulp fiction junk pile. THE LEGO BATMAN MOVIE’s characterization of Batman and Robin speaks directly to what Grant Morrison, in BATMAN: THE RETURN OF BRUCE WAYNE #6, called “the first truth of Batman.”

If Batman can’t do it alone, nobody can. And that’s a good thing. We all need to learn to ask for help, to show compassion and to receive it, to find how we each fit together, like little plastic building bricks.