This article contains full spoilers for the entire first season, focusing mostly on “Chapter Seven” and “Chapter Eight.” If you have not seen the whole first season of LEGION:

DO NOT READ, SPOILERS AHEAD.

Despite how layered and ludicrous LEGION’s first season was, it wrapped up in a neat little bow in”Chapter Seven” and “Chapter Eight.” Of course, not without its share of unanswered questions. We still don’t know who David’s father is aside from a few possible hints (was that Charles Xavier’s wheelchair that flashed during the Shadow King’s opening interrogation in “Chapter Seven”? Did Dan Stevens just make a terrible Pat Stew impression?) and The Shadow King is still an anomaly. Not every question can be answered in such a short season, and LEGION fans will, unfortunately, have to wait for the second season for these answers to come to light. As it is now, LEGION ended its first run on a strong note, but it still has some room to grow.

One of the biggest problems with the final two episodes was that “Chapter Seven” felt more like a finale than “Chapter Eight.” The penultimate episode hit all the right notes for a great ending: the “big bad” is sent away, one of the scariest forces against the heroes dies in a spectacular fashion, an old enemy surprises the audience as the cliffhanger. Then “Chapter Eight” basically does the same thing, and honestly, the ending almost felt like the “safe” way to go (more on this later). LEGION’s pacing post “Chapter Four” was all over the place, but these final two episodes made it most obvious.

That isn’t to say that the finale was a bad episode. It was the opposite, another great entry in an excellent first season. It just didn’t have that “oomph” that viewers expect. None of the heroes die, David is free (for now), even Clark and his government division seem to be open to working with the mutants. As a finale, it worked best in getting audiences excited for what is coming in future seasons. Season Two is already green-lit, and “Chapter Eight” set everything up perfectly for the future of the show.

The highlight of the finale was by far the Pink Floyd “Breathe” sequence. In a lot of ways, it felt more like the final showdown between David and The Shadow King as opposed to the questionable solution we got. It had all the best aspects of LEGION: powerful scenes with enigmatic scores, a fight within the mind, and a desperate act of love between Syd and David. It was the tensest scene of the finale, and The Shadow King’s escape as it goes from body to body in the Summerland group was one of the best-executed shots in the series yet. 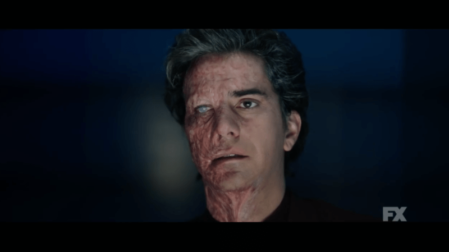 Unfortunately, this culminated in something that LEGION had avoided up to this point. The cliche “good guy uses all his power to run and hit the bad guy using all their power in a flash of light” is the exact thing that made LEGION different from the rest of the comic book adaptations on both television and the silver screen. It felt like a step back in almost every way. LEGION had shown time and again through clever writing and editing the power of both David and The Shadow King, but still felt the need to throw in this overused trope. The show was clearly building up the importance of the relationship between David and Syd, or as Oliver might say, “the power of love, baby.” But even after Syd proved this love and removed The Shadow King from David for the first time, LEGION still felt the need to give us that cliche fight scene which seemed like it was there just for the sake of it being the finale.

But otherwise “Chapter Eight” worked. It was equal parts goofy and dark, in the established LEGION fashion. David simply stacking up the soldiers in a living tower after “Chapter Seven’s” tense cliffhanger was hilarious. The return of Clark is another big plus. He was sorely missed after David’s breakout in the pilot, and his reveal was particularly nice since The Eye was brutally killed. It was also interesting to see how differently the government group works now that Calvin is back. When The Eye took control it was always full frontal assaults, but Calvin seems willing to negotiate, and by the end of the episode, seems to be ready to work with the Summerland mutants. 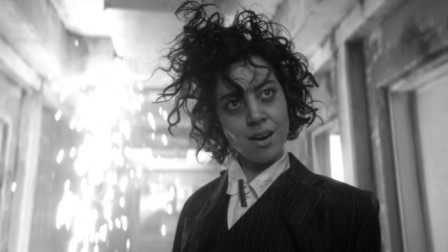 A friendlier government was just one of the many seeds planted in the first season’s final episodes. Other than possible government alliances, we still don’t know anything about David’s parents, or Summerland for that matter. It’s hard to bring exposition with only eight episodes in one season: as a result, Summerland and Melanie are still a big mystery. But showrunner Noah Hawley clearly has a vision for where he wants LEGION to go; this much set-up in a final episode is proof positive of that. It is an interesting way to end a season but makes me hopeful for LEGION moving forward into the future.

LEGION is still in the running for best Marvel show despite succumbing to one of its peer’s more stereotypical tropes. The eight episodes come together to create an incredible first season of television, flaws and all. Moving forward there is nothing but excitement to look forward to in Season Two. The Shadow King possessing (working with?) Oliver was perhaps the best twist to come out of “Chapter Eight,” Jemaine Clement as the future antagonist is too good to be true. The cast and crew have a clear love and passion for LEGION and watching it is a true breath of fresh air. It is a love story, X-MEN spin-off, and visual thriller all at once. As long as it avoids the many pitfalls comic adaptations have the tendency to fall into, it will continue to be one of the best and most unpredictable shows on television. 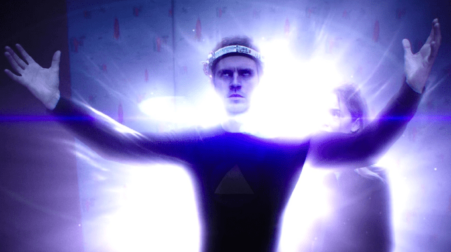