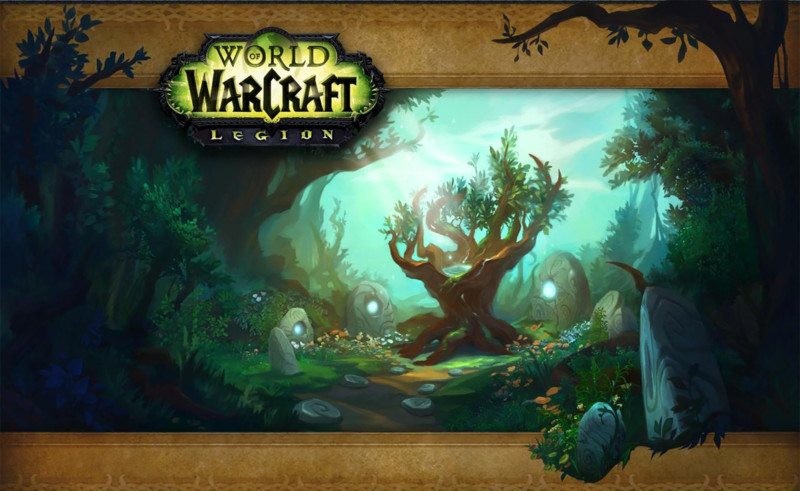 You may not have heard, but in 2004 a little game called WORLD OF WARCRAFT was released by Blizzard Entertainment. It was yet another in a long line of massively multiplayer role-playing games, allowing players to explore the world of a well-known series of strategy games called WARCRAFT.

I’ve been playing LEGION, WOW’s newest expansion, for a few weeks now, and I can honestly say I’m having a blast. Despite how different it is from the old days of WOW, it takes me back to a time when the game was full of wonder, mystery, and excitement. I haven’t felt this way about the game in years.

When WOW initially released, it took the gaming industry by storm. The environments were massive, detailed, seamless, and full of life and secrets. There was a sense of grandeur as you discovered a world much bigger than yourself. Massive cities sprawled across the landscape, each with their own culture and history and agenda. Behind this war-torn world was a charming, lighthearted, and endearing setting that was equal parts silly and dramatic. Players were given the agency to go where they wanted, to forge their own destiny and tell their own story across the wide world of Azeroth. Better yet, the game was more accessible and easy to get into than any MMO that came before it, introducing the genre to a wider audience of all ages. World of Warcraft reminded us that, first and foremost, MMOs are about adventure. WOW didn’t invent the MMO, but it quickly became the standard for the genre.

But it wasn’t perfect.

Despite what nostalgic fans will tell you, classic WOW did just as much to distract from the adventure as it did to achieve it. The game was riddled with obtuse, unbalanced mechanics, player progression rewarded rigid optimization over choice and preference, and the world was static and unchanging regardless of the player’s actions.

Subsequent expansions refined the mechanics and improved the experience, but for every rigid, confusing and pointless mechanic they fixed, much of what made the game immersive and enthralling was lost as well. WOW’s continued development has been a duel between compelling, immersive gameplay and clear, accessible mechanics. With LEGION, we’ve finally found a healthy balance.

The expansion hasn’t been out for very long, so we’re not going to discuss things like end-game, raids, battlegrounds etc, but I want to talk about the simple things that demonstrate what makes this game so great, and how far it has come since 2004.

So what’s so great about LEGION? What makes MMOs fun in the first place? Why should we care? Well, let’s take a look!

To this day, WORLD OF WARCRAFT has some of the most beautiful, detailed, and immersive environments I’ve ever seen in a game, and it’s only gotten better with time. The atmosphere in LEGION is breathtaking. Objects feel solid and 3-dimensional, settlements feel lived in, the cartoonish art style does nothing to diminish from the sheer detail and beauty of the environments and gives everything a sense of charm and whimsy.

A good atmosphere sparks your imagination. It inspires you to explore, to speculate, to come up with your own stories within the lush, detailed world of the game. WOW is famous for its incredible level design, but recent expansions took the focus away from the open world in favor of keeping players in cities, dungeons, and battlegrounds. In LEGION, the dungeons tie into the open world narrative seamlessly, and the leveling experience revolves around a healthy balance of open-world content and linear dungeons.  Treasure chests, hidden areas, and intriguing landmarks make exploration rewarding, giving us an excuse to take in the scenery.The artistry put into each location is staggering. My favorite zone is Highmountain, which feels like a fantasy version of the northwestern United States.

What’s so compelling about Blizzard’s level design is the attention to detail. Not only does each zone feel massive, but care is put into every nook and cranny. In Highmountain, rivers break off into streams dotted with small fishing villages. Every home is cluttered with trophies, knickknacks and stew boiling in the cauldron. On snow-capped mountains, you can almost feel the frost beating on your face as the wind whistles through your ears. And this is all just one zone.The atmosphere alone is good enough reason to play WOW, and LEGION has improved upon an already breathtaking world.

Flavor is a pretty vague term in the industry. In general, ‘flavor’ is all the fun contextual stuff that makes a game immersive and enjoyable. Flavor is the lore, it’s the NPCs that populate a city and give it life, it’s the cool visuals you get with every spell you cast. Flavor is the difference between swinging your sword at a dragon and pressing “button 5” on “generic enemy #378”, it’s all the “useless” stuff that a game simply can’t exist without.

When games want to provide a more organized, balanced, and accessible experience, the flavor is usually the first thing to go. In WOW, many “useless” things were removed over the years in the name of convenience; chief among them being class quests.

READ: Why do we love nostalgia?

As the name implies, these quests were specific to your class and served to immerse the player in their chosen role. But several years ago Blizzard removed most of them, and class rewards were simply given to the player when they reached the proper level. One of the key features in LEGION is the return of class quests in the form of “order halls“. These serve as a home base for your class, a small zone where you can socialize with your like-minded colleagues, recruit followers to send on missions for you, and partake in unique quests that send you all over the world. Class quests have never been this intricate, this involved, or this immersive.

Specializations feel more distinct than ever, giving the player a unique identity. Outlaw rogues are pirates or bandits who use pistols, cannons, and even bribery to defeat their enemies. Meanwhile, subtlety rogues wield shadow magic to teleport behind their prey, striking without ever being seen. Survival hunters use spears, harpoons, and traps to take down the enemy with the help of their pet, while Marksmen focus on ranged combat with a bow or gun. WOW is finally giving us options that matter, that offer us a unique experience and allow us to play the game in entirely different ways even within the same role.

A key problem in MMOs is the static nature of the worlds. Since millions of people need to play through the same content, an environment can never truly change and stories can never truly develop. Over the years, developers have found clever ways around these restrictions, but it’s never been perfect. LEGION creates a convincing illusion of a living world that responds to your character’s actions and the development of the story. Characters we haven’t seen in years are finally returning, unresolved conflicts are being brought to the forefront, we’re returning to long-forgotten locations and teaming up with old allies. Even if it’s just an illusion, this is the first time I’ve felt like the world was truly progressing, Phasing is more effective and less disruptive than ever, allowing the world to change as the story goes on. Entire towns are “permanently” obliterated over the course of the story, characters die and are never seen again, and locations transform entirely as the story goes on.

Flavor is more important than many gamers think. It’s what separates a lifeless process from an experience we’ll never forget. No matter how tight your mechanics, players won’t be engaged without context and immersion. LEGION has brought the flavor back to WOW, and it’s reminded me why I love this game in the first place.

The word “streamlining” has become a dirty word in the gaming community and for good reason. Whenever a developer strips away features, takes away the challenge, or removes the depth from a video game, their reasoning is always the same: “streamlining” the mechanics to make the game enjoyable for everyone.

More often than not, this reasoning is nonsense.

There are countless games whose very soul was ripped out of them in an attempt to reach a wider audience, only for this tactic to backfire. If you try to please everyone, you’ll end up pleasing no one, and this goes double for video games. But then there are times when streamlining improves a product: when a game really has become a bloated mess and needs to trim the fat to deliver a satisfying experience.

Over the years, WOW became bogged down by confusing, conflicting, unintuitive mechanics that punished players more than they rewarded them. Even though we had massive talent trees, there were only ever 1 or 2 effective paths to choose from. Even though we had over a dozen stats, only a few were ever useful to each class. Even though we could “re-forge” our items with different stats, it was only ever used to increase our dismally low hit-rating so we’d have a chance to actually touch the boss.

WOW became a tangled web of confused, punitive, and ultimately pointless mechanics. The only “challenge” behind any of this was the math required to properly optimize your character, and it only served to distract from the action and exploration the game was built upon.

LEGION has trimmed the fat of its mechanics to improve the quality of the gameplay. Instead of keeping all your old gear in the bank just so you can transmog them, an “appearance” tab has been added, containing all the gear your character has ever worn. The talent system has been improving since its overhaul in CATACLYSM, giving players clear, viable choices for their character’s development. Players only receive benefits from their primary stats, simplifying character optimization and reducing fights over gear-drops. Quests in each zone are organized into chapters, letting the player know exactly where they are in the story and what to do next.

Streamlining is only a bad thing when it removes the flavor and depth from the experience. By removing the mechanical bloat, Blizzard has turned the focus back to what matters: playing the game.

MMOs are important to me…maybe a bit too important. My dream for the perfect MMO is to live a life in a virtual world, to create my own stories and legends, to be a part of a dynamic, ever-evolving narrative with my friends. Many games have strived for this, and none have truly succeeded in my opinion, but few have come as close as WOW. Whether you personally enjoy the game or not, it’s important for any MMO fan to study, analyze, and understand what makes this game work for so many people. WOW revolutionized the MMO, and if we thought it was past its prime, LEGION proved us wrong. While we wait for the next big thing in MMOs, it’s good to know that, for now, WORLD OF WARCRAFT is still the king.