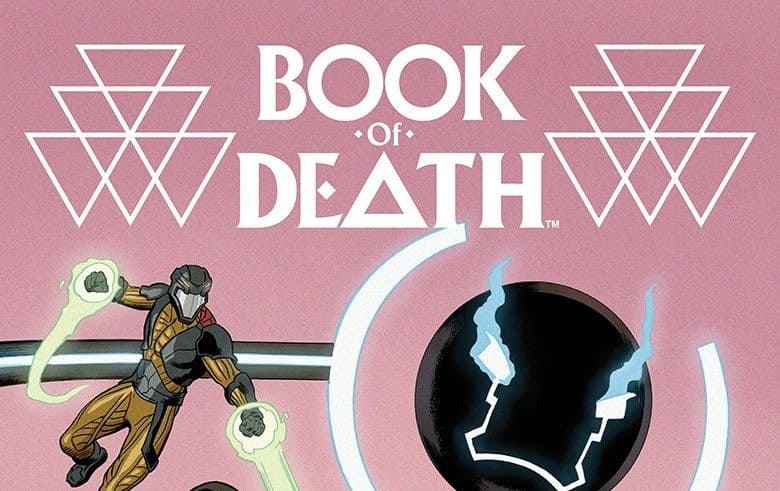 This Week in Valiant Comics…

We’ve got a lot of comics this week! Arcs begin, arcs end, and other keep on trucking. Three different Geomancers are active in three of these titles and the Eternal Warrior in two: again enhancing the connectivity between titles, and continuing to build this great cohesive universe. The BOOK OF DEATH event keeps moving along, RAI takes an issue to regroup after last month’s climax, and IVAR, TIMEWALKER finishes with an explosive finale!

The Eternal Warrior takes on Unity for the fate of the Geomancer. And he does very well. In the last issue, Unity had arrived to apprehend Tama the Geomancer, suspecting her of causing natural disasters in several cities through the world. Eternal Warrior, assured in the fact that it was not Tama’s doing but rather a malevolent force pursuing her, was prepared to fight his former teammates. Now, we get to see how that turns out.

The Eternal Warrior has been in war longer than any member of Unity has been alive (even X-O). He’s a master tactician above Ninjak’s level and he’s more ruthless than Livewire or Gin-GR by far. He dispatches all four members within the span of eleven pages, using their own weapons and confidence against them. He and Tama escape again, intent on discovering the source of the disasters. As they drive, Tama reads from the Book of the Geomancer and shows more of the prophetic, terrible battle in the future. As Unity regroups, Eternal Warrior and the Geomancer examine their fate, and the “proper” 2015 Geomancer David (not Tama, who is from the far future) is revealed to be under the influence of Master Darque, SHADOWMAN villain and malevolent force.

I think this is my favorite of Valiant’s recent crossovers. Venditti writes Eternal Warrior very well, and he is great as a constant in the Valiant Universe and a focal point in stories. His struggle to keep Tama safe is heightened by his competence and quick defeat of Unity. His struggle to protect Geomancers and his constant failure is a great hook and an interesting way to handle an immortal character. I’m not particularly familiar with Master Darque, but from what I understand from my research (and the way he’s portrayed) he will be an excellent antagonist for the rest of this comic, and likely into Valiant’s future.

This is a bit of an interesting book. Namely, it’s difficult to obtain; comic stores must order a certain amount of BOOK OF DEATH in order to get a single issue of LEGENDS OF THE GEOMANCER. Supposedly it’s also never going to be collected in trade (nor digitally) which makes it rare and quite difficult to obtain. Luckily my review copies had no such restrictions, so I’m able to discuss the issue itself! I’m not entirely sure how I feel about that distribution method. I think it might be a bit too difficult to find this comic, especially for some of us with very small stores–I don’t believe my local comic store even had the chance to get a single issue of this. In any case, LEGENDS OF THE GEOMANCER tells a pretty interesting story of the first Geomancer, Anni.

Issue #2 finds Anni in the process of escaping from the villainous Nergal and his army, which results in a bloodbath. Anni, previously Nergal’s Shaman, was close to execution when she escaped, using her Earth powers to crush Nergal’s men. The comic is exceedingly bloody, showcasing Anni’s destruction of Nergal. Ryp and Bellaire’s action scenes–and art in general–are great, detailed, and super interesting, and in this case very gritty.

Anni and Padda (a defector) swiftly defeat Nergal with the help of his son Cuth. The three clean themselves up a bit and seek a tree that will (presumably) grant true power to Anni. The tree (again, beautifully depicted by Ryp and Bellaire) swallows Anni as a giant emerges, terrifying Padda and Cuth. I love learning more about lore and history of characters (as my reviews have shown) and this is a great addition to the Geomancer saga. And the Eternal Warrior/Armstrong/Ivar story, if Anni and Padda’s names are any indication as to their futures. If you can get your hands on this comic, I highly recommend it!

After the devastating end to the last arc, RAI returns, though neither he nor his team seem to be doing well. We get to see everyone recovering after their defeat by Rai XI and Father. Well, maybe not recovering. It’s certainly the aftermath. Lula, Grace, and the latest Geomancer Karana (explicitly named after the main character in the novel ISLAND OF THE BLUE DOLPHINS) take a breather while avoiding Father’s patrols. Karana, rescued from Father and still separated from Earth, laments her lost connection to Geomancy while practicing her skills on a small piece of earth before continuing to escape Father’s forces. Though faced with this level of terror, they seem to have it a bit better off than Spylocke and Rai.

Spylocke finds himself a captive of Father and Rai XI, forced to watch his old movies while being tortured for information, though he seems reluctant to give any of his companions up. Meanwhile Momo sends the monstrous Izak to scare newscaster Karl, though he does not follow instructions and kills the newscaster, bringing Father’s law enforcement to the pair, as Momo mourns Rai’s “passing.”

Rai, of course, is not dead. He’s fallen to Earth, and realized that his nanomachines are not working, leaving him a shambling and bloody mess. While Rai is seemingly alive, he is captured almost immediately by scrappers. Or maybe not captured, but shot repeatedly and abducted. The scrappers drag his seemingly dead body with them and leave him in a really unfortunate position as the book closes.

I was really impressed by some parts of this book, though others left a bit to be desired. I loved the parts with Rai and the girls, but Spylocke and Momo’s sections were very brief and felt kind of incomplete. As the arc moves forward, Kindt will undoubtedly develop full arcs for everyone involved (he generally does) and tie them all together again. Things seem pretty dire for Rai especially.

Clayton Crain’s art continues to shine on this comic. His digital panting style is an excellent match for RAI. In the past, I’ve felt his coloring to look a bit unnatural and here I still do; but it works incredibly. Neo Tokyo looks great and smooth and alive, in a weird and wonderful techno-organic melange of textures. This is definitely Crain’s best work I’ve seen, and it keeps getting better each issue. I can’t wait to see more of his depiction of the ruined Earth as Rai (probably?) tries to find his way back to Neo Tokyo.

The second arc of IVAR, TIMEWALKER concludes in this issue, and it leaves a lot of questions for the future of the title, its direction, and the fate of the titular Timewalker. Last time we saw Ivar, he had gathered his immortal brothers (from two different time periods) and Amelia Earhart (the Amelia Earhart) to assault Oblivi-1 (a space station orbiting a massive black hole) and rescue Neela (the inventor of time travel and Ivar’s semi-reluctant companion) from her (evil) future self. Yes, this is quite complicated, as as par for the course with time travel narratives. Luckily, Van Lente has fed us information at a stable enough rate that it doesn’t feel like an overload!

We join Ivar and company as they crash their ship directly into Oblivi-1. This works a lot better than I’d have guessed, actually, as Ivar’s constant planning comes to a point. His repurposed nanomachines fight off Future Neela’s forces while he and his brothers storm the base. Naturally, Armstrong gets taken out immediately by Future Neela. Eternal Warrior’s rescue of Neela doesn’t go very well either, as she runs away from him in order to help Ivar destroy Future Neela’s time-space destruction device. As Neela rejoins with Ivar for the first time in several issues, they enjoy a kiss together before rushing to save the universe. Ivar’s crew returns to defend the ship, while he and the two Neelas come together for a final confrontation.

Wow, this was an action-packed issue. In a lot of ways, it reminded me of the series finale to BATTLESTAR GALACTICA. Well, at least the first part of the episode. This arc has been very interesting, and has established Ivar in the Valiant universe quite well. The art has been quite good as well; Portela and Dalhouse have made all of the futuristic technology really shine. I love Eternal Warrior and Armstrong, and any embellishment on their past and further stories has been continually compelling. I do however find myself continually wishing for this book to have lower stakes, which would allow more breathing room and time for some character development, as I think that its leads are rich and would benefit from some time together, outside of mortal danger. That’s not to say that the mortal danger isn’t a good hook (especially for initial arcs) but I’m waiting for the series to cool down. Hopefully the next several issues will go into Ivar and Neela’s characters a bit more, now that the confrontation with Future Neela and the Prometheans is (seemingly) finished!

NEXT WEEK IN VALIANT:

Valiant’s other event miniseries DEAD DROP concludes with DEAD DROP #4, which should tie up nicely. We’ve got a double dose of Ninjak next week with NINJAK #6 and BOOK OF DEATH: FALL OF NINJAK #1. Ninjak’s main title starts the next story arc, featuring Ninjak’s confrontation with the Shadow Seven, while the BOOK OF DEATH tie-in will likely show a dark vision of the future, as the previous “FALL OF…” titles have. A taste of what’s to come, perhaps? See you then!