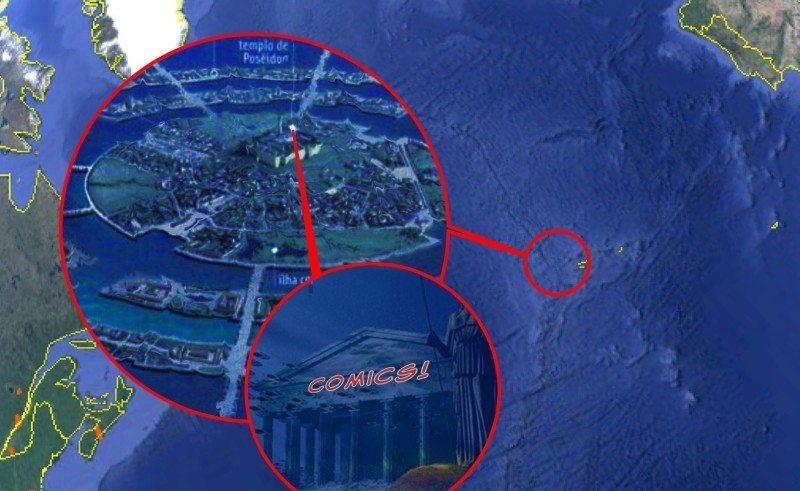 In LEGENDARY CONTINUITY we examine classical myths and the comics they inspire. There are so many mysteries buried in the ancient past, each with it’s own theories regarding their origins and their possible connections to actual people and events. I’m here to share how these stories are represented in comics and illustrate how each of these interpretations are unique theories all their own!

Where and What Was Atlantis?

When the average lad or lassie thinks about the mythical island-continent of Atlantis, what they imagine is something like this:

What was Atlantis? Where? When? What happened to it and the humans that inhabited it?

There are countless theories; every scholar seems to have an opinion, but try to submit such a paper to a peer-reviewed journal, and your reputation and career will be the only things that sink.

In pop culture, however, we can say whatever we want. A screenwriter can say it was an island-sized space-ship

that took off rather than sank. A novelist may portray it as an alternate dimension that only disappeared because we as modern humans have lost the ability to shift between planes.

Now, whether it’s hidden under Antarctic ice, at the bottom of the Atlantic Ocean, buried in silt somewhere in the Gulf of Mexico, or even just in our imaginations, no one can say for sure.

Most comics even have theories on Atlantis. Really. Hey, anything can happen in comics, and I’m here to tell you that these are theories just like every other. That’s precisely what you’ve clicked into: possibly the nerdiest article ever.

How do the Universes of Marvel and DC, for example, compare to the more “scientific” or “classical” representations of this, the mystery-of-mysteries?

(If you’re saying to yourself that this geek-bomb I’m creating will make a comic convention look like a Superbowl party, then… okay, you’re probably right.)

I think you’re prepped; now, BRING UP THE LIGHTS! WELCOME TO THE NERDLE-DOME, BABY!

If you love origin stories like I do, check out this article: THE ORIGIN OF BLACK PANTHER

When Plato told the story of Atlantis in his Dialogues Timaeus and Critius in 360 BCE, he stated it was a tale heheard while eavesdropping on his grandfather, Solon, who heard it from Critias, who claimed the story had been passed down to HIM for three generations, after being obtained from Egyptian texts. The events were said to have taken place a full 9,000 in their past.

In this, the first (recorded) account of Atlantis (by this name), Plato describes it as larger than “the continents of Libya and Asia combined”. It was created by the God Poseidon for his mortal lover Cleito as a gift of sorts, but given the… “tendencies” of the Olympian Gods, it was probably more out of possessiveness than love.

Plato’s Atlantis was inhabited almost entirely by one family; Cleito bore him five sets of twins. (I’ll give you a second to let that sink in… ::shiver::). I think we should all be in agreement as to how badass Cleito must have been; not only did she give birth to ten children in half the pregnancies, but she somehow managed to keep TEN TEENAGE DEMI-GODS under her thumb without a single act of rebellion (Personally, I’d rather take on Poseidon); I think she was more than capable of holding down a small continent.

The capitol city was dubbed “Poseidonis,” and for our ancient Greek Poet, it was constructed in six alternating rings of land and water. This layout is relatively unanimously accepted for most theorists, and the presence of an area where a coastal city of this shape and size is very important when it comes to searching for possible sites. 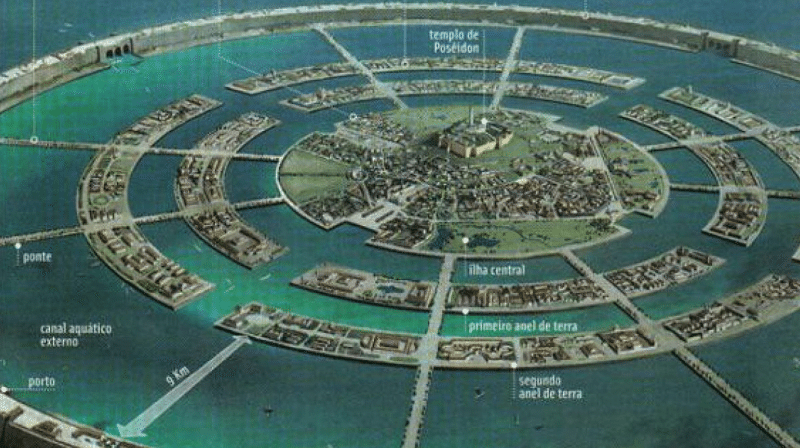 When discussing Atlantis theory with other Atlantologists (I promise you this is a real thing) the first topic is most always: “Where do you think it was?” I find that most who believe it existed claim they “know” where it was, but the truth is there is no truth, and that’s what’s been so hard to explain; we can’t know – if we could, then someone over the past 2600 years would have figured it out. Fortunately for me, it’s not a topic that comes up much at parties.

In Plato, the continent is simply described as “beyond the Pillars of Hercules.” We know this refers to the Straights of Gibraltar. The philosopher also says it is larger than “Asia” and “Libya” combined. If the first thing that pops into your head is “but that’s impossible!” then you would be right. Remember, to the ancient western world, “Libya” was simply North Africa and “Asia” was Asia Minor.

Atlantis was first mentioned in 1937 in issue #7 of NEW ADVENTURE COMICS (vol.1); it was first seen a few short months later in issue #18. The details of Atlantis were few, and based upon Plato’s original description. Since then, the DC’s theory has been expanded upon by countless creators, and each has added their own little sparks of inspiration.

The first detailed (and arguably most inspired) work on Atlantis from DC first appeared in print in the form of a 7-issue mini-series from 199o, entitled THE ATLANTIS CHRONICLES.

Written by Peter David (Spider-Man 2099, Captain Marvel vol.2) and illustrated with blinding skill by Esteban Maroto (Amathyst,  X-Men Unlimited: Hellfire Club)    THE ATLANTIS CHRONICLES was meant to set a firm foundation for David’s Aquaman series which would eventually be published from 1994-1998, with a second series, TIME AND TIDE, also being released in 1996.

The destruction of Atlantis as brought to life by David, shares many parallels with theories posed by Plato. In addition, a few injections of the real-life Roman Empire were present, lending it more resonance with our world.

The Atlantis shown in the DC Universe, though, began when an extraterrestrial race known only as the “Hunter/Gatherers” first settled the actual (pre-existing) continent 65,000,000 years ago. Does that number sound familiar? It should. Need a clue? Okay, how ’bout “dinosaurs”? That’s right, in this account, these humanoid aliens HUNTED THE DINOSAURS TO EXTINCTION! They must have enjoyed those Brontosaurus Steaks, cause they never left.

THE ATLANTIS CHRONICLES, like Plato, names the capitol city Poseidonis, but doesn’t much match the simple urban planning of the Greeks but rather a more modern interpretation:

As shown in this illustration from THE ATLANTIS CHRONICLES, there are rings implied, but only with allowance for the artistic freedom, which allows David and Maroto to better organize the story.

You’ll also notice that crystal dome. In the series, it was said to have been erected before the sinking of resplendent jewel of the Atlantean Empire; it was put in place to keep out the encroaching barbarians
(ie. Homo Neaderthalensis)  from destroying the the city.

That’s it. That’s all we get from that account.

In the Atlantis from DC’s Aquaman mythos, the location was exactly where Plato said it would be – in the middle of the Atlantic Ocean.

There really isn’t much more to say about that; DC’s theory on the location lines up precisely.

From Marvel, Atlantis first appears for the first time in 1939 in MOTION PICTURE FUNNIES WEEKLY #1; a short story titled “Here Comes the Sub-Mariner.” It was created by Bill Everett. This tale also contains the first appearance of Namor, so it’s only fitting.

Marvel’s Atlantis is in the same place – the Atlantic Ocean. This theory shares itself with both Plato and DC. Unfortunately, Marvel Comics stories have yet to give us much in the way of description, which is unfortunate for our purposes. While we don’t even know if it had the rings of land and water, they provide some information.

What they DO give us is the time-frame of its destruction. According to Marvel, the Continent of Atlantis was destroyed in the “Great Cataclysm” some 21,000 years ago, and just as posed by DC, was destroyed in a battle with a barbarian race – the Lemurians (Lemuria… now, that’s a whole different can of worms!). We’ll speak to that in the third article of this series, which will compare the views of the continent’s destruction, but fortunately, the Atlantians of this legend had built a dome around the capitol city after their priests had foreseen the events to come.

In current Marvel stories, Atlantis’ capitol city city still exists, but the rest of the continent has been built into various settlements throughout the Atlantic using the rubble of the previously great nation.

What we can gather by comparing and contrasting these three Atlantis accounts is that Marvel Comics and DC Comics agreed with Plato when they first shared their theories with us; all three are located in the central Atlantic, and at least Plato and DC agree that the capital of the kingdom was named Poseidonis.

Where they differ comes first in the form of the land’s description. Neither of the comic theories depict the land having been created by gods as in Critias; it was a natural part of the Earth. The main metropolis in the origins of both Aquaman and Namor (subjectively) were enclosed in domes to prevent the cities’ destruction at the hands of barbarian peoples. They also don’t share one of Atlantis’ most famous features – the alternating and concentric rings which radiate out from the center island which hold the royal palace.

All three of these theories are actually possible. No, really, they are. Again, we can’t say for sure because there’s no way to know for sure. One day we actually may find that a comic book creator has unwittingly stumbled upon the truth of Atlantis, but there are more factors to consider.

Okay, this is the last one; then you’re cut off. You’ve work to do!: JOKER HAS A NEW ORIGIN STORY

In pt. 2 of this series, we’ll compare the same three theories while focusing on their proposed inhabitants and cultures.

Catch ya next time! (HA! see what I did there?)

WATCH OUT FOR MORE FROM JACOB!