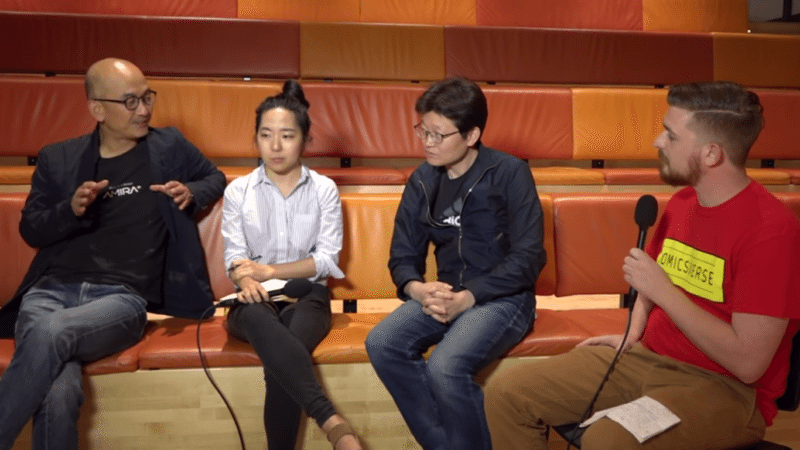 One of my favorite films that I had the opportunity to see at this year’s New York Asian Film Festival was director Lee Joon-ik and producer/screenwriter Shin Yeon-Shick’s DONGJU: THE PORTRAIT OF A POET. The film’s touching story of South Korean poet Yun Dong-ju is moving and strikingly humanist. I felt excited to sit down during NYAFF with the film’s creative team to pick their brains about the film’s political themes and why they wanted to tell the story of this Korean icon.

Lee Joon-ik is something of an icon himself. His work over the last two decades in South Korean cinema has earned him numerous accolades and praise. He is the director of 2005’s KING AND THE CLOWN, which has become one of the top ten highest grossing films in South Korea. Both of his films from this year’s NYAFF base themselves on true stories from South Korea’s history.  The first is 2015’s THE THRONE, a film with a moving dramatic portrayal of the relationship between King Yeongjo and his son Prince Sado.

The film went on to be South Korea’s entry for the Oscar’s Best Foreign Film category in 2015. The second film is DONGJU: THE PORTRAIT OF A POET which tells the story of South Korean poet Yun Dong-ju and his inspiring life. It’s easy to get the impression from my interview with Mr. Lee that the director still has a great deal of enthusiasm and excitement for the career of filmmaking. In addition, I would not be surprised if his best work is yet to come.

Of course, no film can fully exist with a script: enter Shin Yeon-shick. Mr. Shin has also worked in South Korea for just over a full decade. Mr. Shin does not only write screenplays, he also directs and produces films. He is a consummate professional who can juggle directing, producing, and writing, all at the same time. Mr. Shin’s efforts have not gone unrecognized. He has won several awards including the Korean Association of Film Critics award. His abilities as a cinematic jack-of-all-trades are something to be admired.

In our discussion, we address the somewhat unknown story of beloved South Korean poet Yun Dong-ju’s final days. and the importance of art and politics. In conclusion, my interview with these two highly talented filmmakers only reinforces the power of cinema to be both personal and accessible to all people.