Popular media is (painfully slowly) becoming more diverse. With shows like FRESH OFF THE BOAT, EMPIRE, JANE THE VIRGIN, and BLACK-ISH, it’s easy to believe that we are at an age where a diverse cast, or, if we dare to dream, a cast lead by people of color is no longer a thing of novelty but is “the norm.”

But for every time we hear a variation of the, “It’s 2016, get over it,” war cry against those who resist and reject this trend, there’s also its annoying cousin who shows up at the family reunion twenty minutes late: “Baby steps!” This, and other apologies like it, is often mentioned in comment sections of articles that criticize a very particular and nuanced problem American media is experiencing right now: white women in media who are out-of-touch with racial issues.

This kind of ignorance has paved the way for misrepresentation and underrepresentation of people of color in media at the hands of famous white feminists—white women whose feminism tends to revolve around issues pertaining almost exclusively to white, straight, cisgender, and middle–to upper-class women. Writers and performers such as Lena Dunham with her TV show GIRLS and Tina Fey with UNBREAKABLE KIMMY SCHMIDT are unfortunately notorious in handling race poorly. These—plus the fact that Tilda Swinton and Scarlett Johansson have recently been cast as characters who were originally Tibetan and Japanese characters, respectively—are indicators that we still have a long way to go in media diversity.

GIRLS is a show that generally follows the thematic footsteps of its predecessor SEX AND THE CITY. It’s a show where four twenty-somethings navigate work, play, and life in New York City. And it’s a great trip at first. The girls, Hannah, Shoshana, Jessa, and Marnie, are portraits of millennials who struggle to support themselves financially without help from their parents, make mistakes, get into trouble, fall in and out of (and back in) love—and this is just the first season.

At a glance, it’s witty, biting, and at times endearing. But, drama and humor aside, there is something missing from this “trying to make it in the city” narrative: realistic city populations. New York City is home to over eight million people with White people at 44%, African Americans at 25.5%, American Indian and Alaska Natives at 0.7%, Asian Americans at 12.7%, those described as “Other” at 13%, and Hispanic/Latino/Latinx at 28.6% of the population. And yet, the show is mostly comprised of white characters, save for the few and far between, like Sandy.

Dunham had received criticism online for the lack of people of color in her New York City-based show. Responding to the criticism, Dunham brought on the talent of Donald Glover to play Sandy, an African American character that first appeared in episode one of season two. He and Hannah dated for the first two episodes of that season until the two started to talk about an essay that Hannah wrote and wanted feedback from, to which Sandy says that while he thought it was well written, he felt that nothing happened. This bothers the self-centered writer and the two eventually get into an argument that sets itself apart from the other breakups on the show: They talk about race.

One of the more powerful lines comes from Sandy’s character in which he nails the problem with white people who reduce people of color as part of an experience: “Oh, I’m a white girl and I moved to New York and I’m having a great time and I got a fixed gear bike and I’m gonna date a Black guy and we’re gonna go to a dangerous part of town.” He points out that people like Hannah see people of color only in how they are connected to their lives, their experiences while disregarding the other’s humanity, their own wishes, and plans.

They are unhappy—with each other and what they said to each other—and they break up. Sandy is never seen again and, apart from some extras in the background at parties the girls attend, we do not see another person of color become a significant character in the show. And it’s hard to be grateful for Glover’s performance because, while the argument they had was one of those moments where you felt, “this show gets it,” the moment is over almost as soon as it arrives and the audience in search of a diverse cast is left wanting once again.

But then, what happens when a piece of media does have recurring and permanent roles played by people of color, but it is handled poorly? We need to look no further than our local Netflix watchlist and our problematic queen of early 2000s comedy, Tina Fey. Fey won over millennials before we were even old enough to be called millennials first with the rise and fall and rise again of Cady Heron in the modern classic MEAN GIRLS. And then again with the ups, downs, and sideways of the working and learning to play Liz Lemon from 30 ROCK. Now, she’s broken into the world of Netflix with firmly optimistic Kimmy Schmidt from UNBREAKABLE KIMMY SCHMIDT is set on not letting her kidnapped-into-a-doomsday-cult past interrupt her future.

Each manifestation of this Woman Who Takes on the World is unapologetic in its comedy and even throws in some clever social criticism. With MEAN GIRLS, it delved into toxic female friendships and how it’s not just the guys us ladies have to look out for. 30 ROCK often poked fun at the New York liberal socialite, with one such moment as Liz asks her boss why he’s wearing a tuxedo, to which he replies, “It’s after six. What am I, a farmer?” UNBREAKABLE KIMMY SCHMIDT does this as well, with Kimmy’s boss Jacqueline, whose life screams Poor Little Rich Girl. (Well, at first.)

What’s unfortunate to note in these three pieces of media, however, is the progressively stale representations of and commentaries about race. While the character of Kevin Gnapoor is truly a gift, MEAN GIRLS still stands as a white woman-centric film as the characters who we see go through the most change—Cady and Regina George—are both white. 30 ROCK saw some backlash over its portrayal of the character Tracy Jordan, whose lines, Fey once remarked, were inspired by her then very young child, bringing to mind an ugly history of infantilizing African Americans to justify white people’s treatment of them.

In UNBREAKABLE KIMMY SCHMIDT, we get Titus. And Titus, Kimmy’s roommate and first real mentor in how to survive New York, is complicated in the sense that while his flamboyance has caused for some criticism from fans as being stereotypical. There have been some who lauded the decision to have a gay African American man act the way he does. Titus’ unabashed and blunt personality poses a challenge to our idea of masculinity and how men, particularly Black men, are “supposed” to act. For every “Pinot Noir” music video, we get a vulnerable and emotionally charged moment of Titus explaining to Kimmy how he also came from corn country and how he was once naïve, too.

But then we get Dong. We meet him first at a GED class Kimmy is taking and immediately there is some promise. Kimmy giggles over Dong’s name, an obvious innuendo, only to be laughed at when Dong tells her “Kimmy” means penis in Vietnamese. And that is the extent of Dong’s complexity. For the rest of his time on the show, it’s all heavy accents, constantly ducking away from authorities because he’s an undocumented immigrant, and some cringe-worthy model minority stereotypes (being unassuming in romantic endeavors and good at math).

And then, we also get Jacqueline’s secret: that she’s actually a white-passing Lakota woman. Here, what could have been played off as a critique of white people who claim Native American roots to seem more “interesting” has turned mostly into a lost opportunity. Because in this scenario, Jacqueline isn’t lying. As we go through her flashbacks and eventually meet her parents, we are to believe and accept this character as Lakota and not actually white.

And while it has stayed on as an important aspect of the show’s second season, as we see Jacqueline make it her mission to take down the Washington Redskins, it’s still hard to accept this gag of the show. The producers of the show passed on the chance to cast a Native American actress as one of the main characters in the show with a background story, a complicated character arc, and dynamic relationships with the rest of the cast. 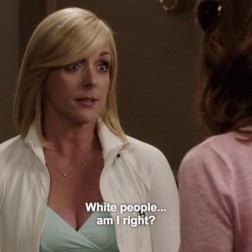 And then, to top it all off, there’s the episode, “Kimmy Goes to a Play!” in the second season. This article is not the first to criticize the show’s portrayal of people of color and, by the way, things seem to be progressing, it will probably not be the last. The first season saw numerous fans who were upset about the character Dong. In an interview with Net-A-Porter following this outcry, Fey stated that “There’s a real culture of demanding apologies, and I’m opting out of that.” What happened instead was an outright mockery of the people who took issue with how she wrote her characters, and she used one of her more complicated characters to do so.

Titus, ever in search of stardom, decides to do a one-man play about one of his past lives where he was a geisha named Murasaki. And who shows up but an Internet-based group called The Forum to Advocate Respectful Asian Portrayals in Entertainment, (which makes for a brow-raising acronym). The group watches the play and boos nearly the entire time until one of them seems to have an epiphany and shushes his group members. One such member, after apparently offending herself by saying “I can’t breathe” in response to how the show made her feel, disappears in a beam of light.

READ: If you are not excited about BLACK PANTHER, you need to be

What these examples of how people of color are portrayed in media with white women calling the shots have in common is deceptively simple: it’s lazy. White liberal women have a long, ugly history of taking the foreground of social activism, often to the detriment of others, while men and women of color take a backseat. From forcing Black suffragettes to stay in the back during marches to constantly nitpicking the sexual agency of modern artists like Beyoncé and Nicki Minaj when artists like Miley Cyrus and Madonna are celebrated for the same thing, white feminism keeps the mainstream issues we discuss and explore in our media-centered on white women and ignores the needs of other groups.

So for media creators like Dunham and Fey to callously use the images and words of people of color for one or two shining moments before washing their hands and continuing a perpetually white-centered media, it’s disappointing. And it’s a bit cowardly, as the media creators themselves can fall back to their comfort zones and avoid confronting their own unexplored feelings about race.

And this laziness mixed with a pinch of cowardice results in things like movie studios shrugging at the idea of white actresses playing characters who were originally people of color. What the big underlying problem with actresses like Scarlett Johansson and Tilda Swinton, (and Jane Krakowski, for that matter, as Jacqueline in KIMMY SCHMIDT) is that it’s taking away opportunities for actresses of color who are still underrepresented in mainstream media.

With the success of things like FRESH OFF THE BOAT and BLACK-ISH that not only have people of color in the front and center but also have meaningful, provocative, and, yes, even humorous discussions of race and what it’s like to be the Other, it’s sad to watch white women-led media stumble in the dark.